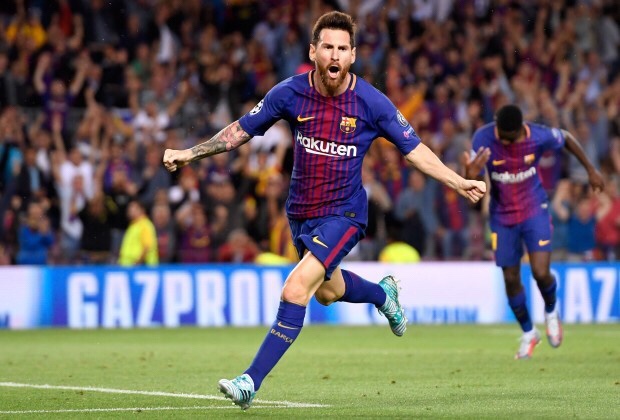 Barcelona was staring in the face of their first league defeat at Sevilla before their dynamic duo saved the day. Lionel Messi and Luis Suarez each scored in the final minutes to help Barcelona earn a 2-2 draw at Sevilla on Saturday. Franco Vazquez’s left-footed strike in the 36th-minute opened the scoring in Seville as the hosts led 1-0. Luis Muriel doubled the lead after 50 minutes as he scored his ninth goal in all competitions. Suarez began the comeback in the 88th-minute rifling in a right-footed effort into the top-left corner. Messi beat Sergio Rico a minute later from long-range to keep the unbeaten league run alive for Barcelona. Rico made seven saves for Sevilla while Marc-Andre ter Stegen made four for Barcelona.

Elsewhere in Europe, Manchester City faced a trip to Everton looking to add to their lead in the Premier League. Juventus faced AC Milan in the Serie A showdown of the weekend, while PSG faced Monaco in the Coupe de la Ligue final. Bayern Munich took one step closer to clinching the Bundesliga title after a comfortable win vs. Borussia Dortmund.

Here’s a closer look at all of Saturday’s European action:

Liverpool fought their way back for all three points in South London, defeating Crystal Palace 2-1 at Selhurst Park. Sadio Mane drew the Reds level in the 49th-minute, after Luka Milivojevic opened things after 12 minutes for Palace from the penalty spot. Mohamed Salah netted his 29th league goal of the season which gave Liverpool their second consecutive win. The Egyptian slotted home with his right foot into the bottom-left corner, and now has 37 goals in all competitions. Palace have now lost four of their last five matches, and sit two points clear of the relegation zone. Liverpool are in third place ahead of Wednesday’s Champions League clash with league leaders Manchester City.

Manchester City took one step closer to clinching their third Premier League in seven years after a 3-1 road win at Everton. The Citizens used a trio of goals in the first-half to ease their way to three points at Goodison Park. Leroy Sane’s opener came four minutes in for Pep Guardiola’s men before Gabriel Jesus doubled City’s lead in the 12th-minute. The Brazilian got on the end of Kevin De Bruyne’s cross and headed past Jordan Pickford. Raheem Sterling tapped home City’s third in the 37th-minute, giving the English winger 16 league goals on the season. Yannick Bolasie’s right-footed strike snuck past Ederson in the 63rd-minute to give Everton a consolation goal. With the win, Guardiola’s men know a full three points against Manchester United next weekend will clinch them the league crown. Everton are in ninth place, after seeing their two-match winning run snapped.

Real Madrid prepared for their Champions League tie this week by defeating Las Palmas 3-0 away from home. Gareth Bale led Los Blancos with a brace, while Cristiano Ronaldo was rested. Bale’s opener came in the 26th-minute as the Welshman slid home Luka Modric’s through ball past Leandro Chichizola. Karim Benzema doubled Madrid’s lead after 39 minutes as he scored from the penalty spot after Lucas Vazquez was fouled inside of the box. Bale put the match out of reach in the 51st-minute as he scored his second of the day, the time from the penalty spot. Palmas only had three shots on goal in the loss, their third out of their last four matches. Real Madrid are in third, a point behind city rivals Atletico who play tomorrow. Palmas are in the relegation zone and are seven points from safety.

Bayern Munich demolished their way past Borussia Dortmund by a scoreline of 6-0 in Saturday’s DerKlassiker. Robert Lewandowski led the way with a hat trick, while James Rodriguez sparkled also for the hosts. Lewandowski opened things after five minutes, before James doubled the lead to 3-0. Thomas Muller extended the lead in the 23rd-minute, finishing from a fast break. Lewandoski finished Franck Ribery’s assist from close range to make it 4-0 before the French winger scored his sixth goal in all competitions. A close-range finish by the Polish Lewandowski capped the final score at 6-0 giving him 34 goals in 37 matches this season. Dortmund was held to three shots on goal, but were steamrolled in the opening 45 minutes. The visitors stay in third place while Bayern are in first.

Schalke used a pair of second-half goals to defeat Freiburg 2-0 at the Veltins-Arena on Saturday. Daniel Caligiuri’s 63rd-minute penalty kick broke the deadlock for Schalke after Breel Embolo drew a foul from Manuel Gulde. Nils Petersen saw a second yellow card for Freiburg two minutes later which reduced the visitors to 10-men. Guido Burgstaller finished off his ninth league goal of the season later in the half to give Schalke their insurance tally. Freiburg was held to zero shots on goal, dropping their third match out of their last four. The visitors are in 14th place and five points clear of the bottom-three, while Schalke sit comfortably in second.

Here’s all of Saturday’s Bundesliga results:

Juventus continued their push for another league title after a 3-1 home success against AC Milan. Paulo Dybala’s 20th goal of the season in all competitions gave Juventus a 1-0 lead after eight minutes. Former Juve defender Leonardo Bonucci canceled out Dybala’s opener later in the first-half as he headed in from close range. Juan Cuadrado played the hero for the hosts heading in the winning goal after 79 minutes before Sami Khedira added an insurance goal in the 87th-minute. Juventus sit four points clear of Napoli who are close behind, while Milan remain in sixth.

After leading the Serie A table for most of the season, Napoli are playing catch up now in Italy’s top-flight. Maurizio Sarri’s men fought their way back for a point on Saturday, tying Sassuolo 1-1 away from home. Jose Callejon’s left-footed equalizer came in the 80th-minute for Napoli who remained in second place with the result. Sassuolo led since the 22nd-minute after Matteo Politano finished from close-range for his fourth goal of the season. Both shots each had four shots towards goal, and each had to do with a point at respective ends of the table. Napoli sit four points back of Juventus, while Sassuolo are four points clear of the bottom three.

In the lone Ligue 1 match of the day, Marseille bounced back from a loss last weekend to defeat Dijon 3-1 away from home. The visitors had to dig deep after allowing Dijon to equalize in the 73rd-minute. Kwon Chang-Hoon’s left-footed finish tied the match for Dijon after Valere Germain opened things early in the first-half. Lucas Ocampos scored the winner for Marseille in the 88th-minute to regain the lead, before Dimitri Payet added Marseille’s third from the penalty spot. Marseille are in third place after the win, while Dijon are in 10th place following the defeat.

PSG claimed their fifth consecutive Coupe de la Ligue title after a convincing 3-0 win over Monaco in Bordeaux. Edinson Cavani led the Parisians with a brace while Angel Di Maria also got on the scoresheet. Cavani’s opener came in the eighth-minute as the Uruguayan swept home from the penalty spot following Kylian Mbappe being tripped by Kamil Glik. Di Maria finished Mbappe’s assist later in the half to double PSG’s advantage before halftime. Radamel Falcao saw a goal disallowed by VAR while Rony Lopes clipped the crossbar in the second-half. Cavani netted his second of the match and PSG’s final goal of the match to clinch the win for Unai Emery’s men. The win now gives PSG their eighth Coupe de la Ligue title and their sixth since 2008.