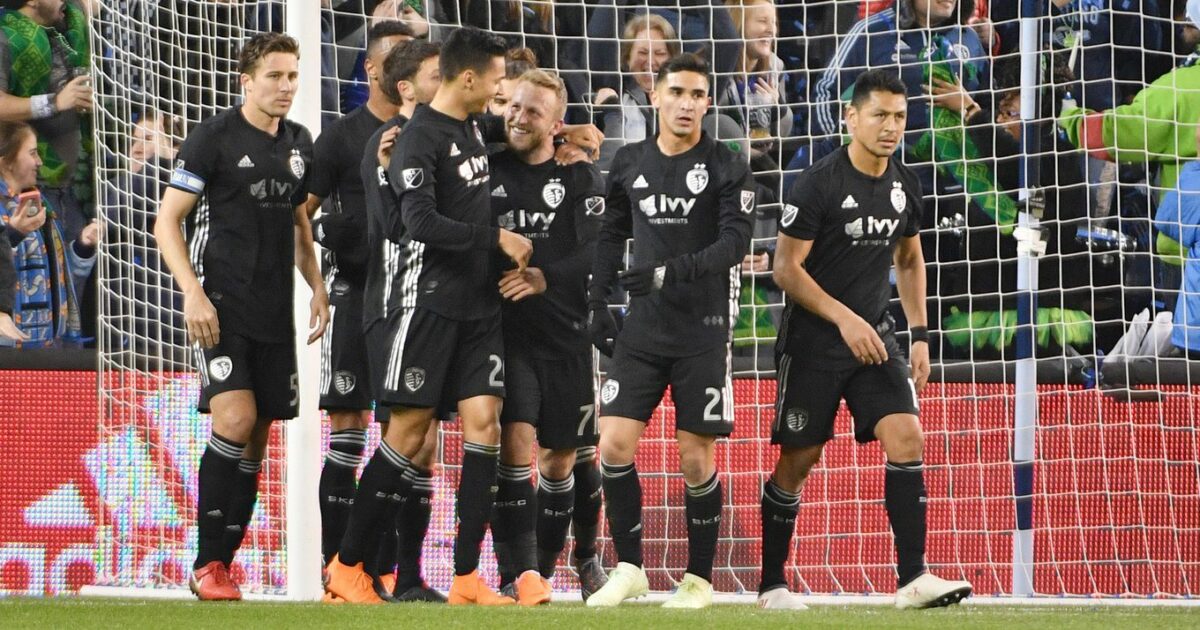 Sporting Kansas City got blanked in their season opening match at home to begin the 2018 season, but put in a much-stronger performance in their second.

Peter Vermes’s side used a 56th minute blistering strike from U.S. international Graham Zusi and an insurance goal by Felipe Gutierrez to claim all three points in a 3-2 home win against the San Jose Earthquakes on Saturday.

The visiting Quakes had the first crack at home after 19 minutes when Florian Jungwirth was kept out by Tim Melia. Six minutes later, offseason acquisition Johnny Russell was brought down by Quakes keeper Andrew Tarbell in the 24th-minute to win the hosts a penalty.

SKC midfielder Ilie Sanchez stepped up and found the bottom right corner for a 1-0 lead. It was the Spaniard’s first goal for the club in his 37th league appearance.

However, the lead did not last long for Vermes’s men as Valeri Qazaishvili leveled the score from close range. The Georgian international had a stellar performance in San Jose’s season opening win over Minnesota, and netted his second goal of the new campaign in this one.

SKC went back in front in the 56th minute when Zusi gave himself some room and rifled a left-footed effort into the top-left corner. It was the 31-year-old’s first goal of the season, and his first since October 2016, which also came against San Jose.

The Quakes would not go away quietly, however. They forced Melia into action just minutes later keeping Quakes forward Danny Hoesen out from a difficult angle, forcing a save out of the keeper.

SKC was able to extend their advantage in the 68th minute when Gutierrez added his third goal of the season by beating Tarbell from long-range.

Once again, the Quakes were not done. They pulled one back barely into stoppage time when Chris Wondolowski opened his account for the season, finishing Magnus Eriksson’s assist into the bottom-right corner. However, it proved to be too little too late for San Jose as Sporting Kansas City hung on for their second consecutive league win, and their first at home of the 2018 season.

Sporting KC (2-1-0) next travel to face the Colorado Rapids on March 24th, while San Jose (1-0-1) heads into another bye week. Mikael Stahre’s side are back in action at Avaya Stadium on March 31st as they entertain New York City FC.

Felipe Gutierrez is off to a terrific start to his Sporting KC career, after bagging three goals in his first three matches. The Chilean midfielder seems to have found a new home, paired with both Roger Espinoza and Ilie Sanchez. Gutierrez is definitely a player to watch for Peter Vermes’ side.

After halftime, the Earthquakes did not let down offensively as they looked for a possible winner. However it was an MLS veteran who stole the show with his rifle of a left-footed effort as Graham Zusi swung the match in KC’s favor by putting them in front for good at Sporting Park.

Andrew Tarbell did not have his best night for San Jose. He conceded a penalty and got beat twice from outside of the box. The 24-year-old only completed 10 of his 24 passes as well, struggling to get much going out of the back for the rest of his team.