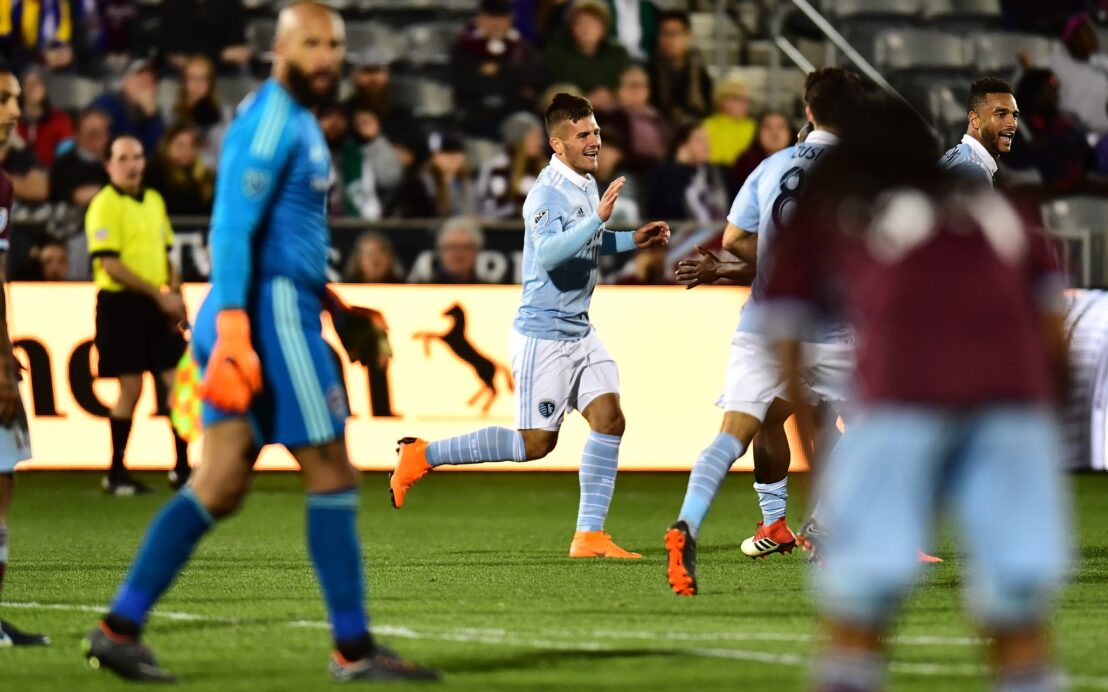 Sporting Kansas City kept its lead atop the Western Conference thanks to a pair of second-half goals at Dick’s Sporting Goods Park.

Felipe Gutierrez and Diego Rubio scored a goal each to level Sporting KC and the Colorado Rapids 2-2 on Saturday night.

Anthony Hudson’s Rapids broke into the lead early, as they pounced for a pair of goals in a three-minute span.

Dominique Badji connected with Edgar Castillo’s cross from the left wing in the fifth minute to put the home side ahead.

Offseason acquisition Joe Mason provided more reason for celebration in the eighth minute, as he raced through the Sporting KC back line to connect with a long ball from Tommy Smith.

The MLS debutante twirled in the box to find the perfect angle and finished the first goal of his MLS career into the back of the net.

The two-goal halftime advantage created by the Rapids held until the 57th minute, when Gutierrez chased down a loose ball in the penalty area and slotted home his team’s first goal of the contest.

After Yohan Croizet hit the left post with his header, the Chilean darted into space and fired in his fourth goal of the young season.

Rubio secured a point for the visitors in stoppage time, just two minutes after entering the contest, as he finished off a nice move in the penalty area started by Gerso Fernandes and Khiry Shelton.

Colorado will attempt to win its first game of the season Saturday, when it plays host to Philadelphia, while Sporting KC welcomes D.C. to Children’s Mercy Park.

Felipe Gutierrez was once again active in the final third for Sporting KC, as he scored on one of his three shots on target.

Diego Rubio’s equalizer extended Sporting KC’s unbeaten run to three games and delivered heartbreak to the Rapids, who appeared to have a victory locked up in their home opener.

Although Sporting KC came back to draw, Matt Besler and Ike Opara had a rough outing, as they let in two more goals. Sporting KC is tied with D.C. for most goals conceded in MLS with nine.