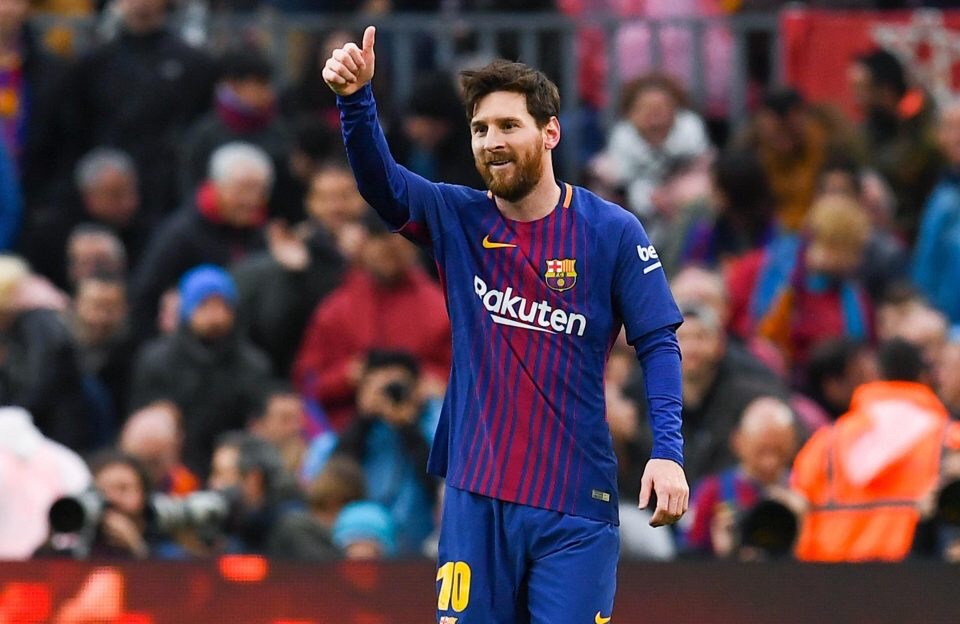 Lionel Messi has broken many records for Barcelona during his time with the club, and the Argentina reached another milestone on Sunday. Messi scored the winning goal in Barcelona’s 1-0 home triumph against Atletico Madrid, giving him 600 combined goals for club and country. Messi’s cool free kick after 26 minutes was all Barcelona needed to extend their lead at the top of the La Liga table to eight points. Jan Oblak made four saves in the loss for Atlético while his teammates only had one shot on goal in total. Atlético remains in second place.

Elsewhere, Manchester City defeated Chelsea at home while Arsenal slumped to another EPL defeat. Bayern Munich rolled to an away win at Freiburg, while Nantes was held to a draw on the road at Marseille. Serie A matches on Sunday were postponed due to the tragic passing of Fiorentina captain Davide Astori.

Here’s a closer look at all Sunday’s European action:

Manchester City extended their lead to 18 points atop of the EPL table after a slim 1-0 win over Chelsea. Bernardo Silva broke the scoreless deadlock after 46 minutes, slotting home David Silva’s cross past Thibaut Courtois. Courtois made two saves on the afternoon, while Chelsea could not force a single save out of Brazilian keeper Ederson. The Blues are in fifth place following the loss, while City look in prime position to clinch the EPL title before April.

Brighton earned a shocking 2-1 home win against slumping Arsenal at the Amex Stadium. Goals from Lewis Dunk and Glenn Murray had the Seagulls flying with a 2-0 lead after 26 minutes. Pierre-Emerick Aubameyang pulled Arsenal level before halftime while Laurent Koscielny struck the post. Mesut Ozil had the best chance to draw level for the Gunners in the second-half but was kept out by Matt Ryan. Brighton are up to 10th place while Arsenal sit in sixth.

Manchester United faces Crystal Palace on Monday in the final match of Round 29.

Valencia made it five straight matches unbeaten after a 2-0 win over Real Betis on Sunday. Rodrigo Moreno opened things after 23 minutes, slotting home from a left-footed effort. Simone Zara’s 11th goal of the season added some insurance for Valencia in the second-half. Norberto Neto made four saves in the home clean sheet for Valencia, which keeps them in fourth place. Betis are in ninth place following their second defeat out of their last four fixtures.

Celta Vigo hosts Las Palmas on Monday in the final match of Round 27.

Bayern Munich got back to winning ways after a 4-0 thumping of Freiburg away from home. An own goal by Alexander Schwolow gave Bayern a 1-0 lead after 25 minutes. Corentin Tolisso doubled the visitors lead three minutes later with a blistering right-footed effort into the top-right corner. Sandro Wagner scored his third goal of the season after 54 minutes finishing from close range. Thomas Muller added a consolation goal in the 69th-minute to cap the scoring at the Mage Solar Stadion. Bayern are 20 points clear at the top of the Bundesliga table while Freiburg are in 13th.

Here’s all of Sunday’s Bundesliga fixtures:

All of Sunday’s Serie A fixtures were postponed due to the passing of Fiorentina captain Davide Astori.

The points were shared at the Stade Velodrome as Marseille fought back for a 1-1 draw against Nantes. Florian Thauvin’s 95th-minute finish from close range snatched a late point for Rudi Garcia’s side. Leo Dubois had Nantes ahead after 11 minutes beating Steve Mandanda from long range. It was the Frenchman’s second league goal of the season. Mandanda made two saves in the draw, while Nantes keeper Ciprian Tatarusanu made four. Nantes drop down to seventh place while Marseille are in third.

Here’s all of Sunday’s Ligue 1 fixtures: