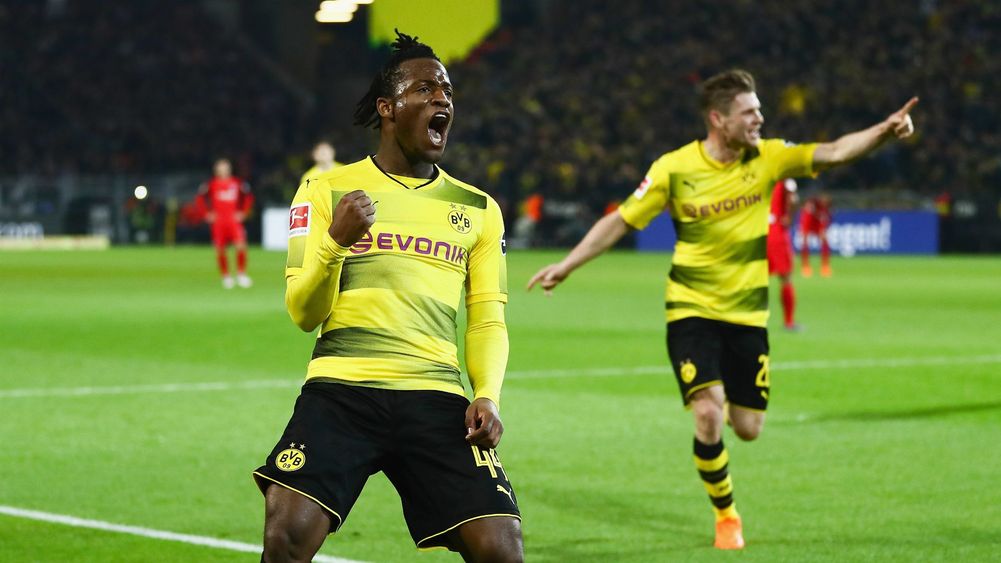 Michy Batshuayi has quickly made an impact at Borussia Dortmund since joining from Chelsea on-loan back in January. The Belgian international continued his productivity for the German club, netting a brace off of the bench including the gamewinner in Dortmund’s 3-2 home win over Eintracht Frankfurt on Sunday. After being pegged back twice in the match, Batshuayi scored the winner in the 94th-minute, scoring from a left-footed finish into the top-left corner. An own goal by Frankfurt’s Marco Russ gave Dortmund a 1-0 lead after 11 minutes, the lone goal in the opening half. Luka Jovic headed Frankfurt level in the 75th-minute for his fifth goal of the season.

Christian Pulisic distributed a beautiful through ball assist to Batshuayi in the 77th-minute as Dortmund regained the lead. Danny Blum looked to have given Frankfurt a late draw, scoring from close range after 91 minutes but Batshuayi netted his seventh goal for his new club in the dying moments. Dortmund are in third place, while Frankfurt drop into fifth following the loss.

Arsenal earned their second consecutive clean sheet in the past four days, defeating Watford 3-0 at the Emirates. Shkodran Mustafi opened the scoring after eight minutes, heading home Mesut Ozil’s cross from a set piece. Pierre-Emerick Aubameyang doubled the Gunners lead in the 59th-minute, sliding home Henrikh Mkhitaryan’s through ball assist. Troy Deeney’s penalty kick effort after 62 minutes was saved by Petr Cech to keep the hosts in front. Mkhitaryan stamped the final score at 3-0 in the 77th-minute, finishing Aubameyang’s assist for his second goal with Arsenal. Watford drop into 10th place in the standings, while Arsenal remain in sixth.

Manchester City travel to Stoke City on Monday in the final fixture of Round 30.

Espanyol extended their unbeaten run to seven matches after a 2-1 home win against Real Sociedad on Sunday. The hosts used a pair of second-half goals to complete the comeback at home. Willian Jose’s opener came 41 minutes in for Sociedad who took a 1-0 lead into halftime. Leo Baptistao drew Espanyol level after 51 minutes, scoring from the center of the box. Gerard Moreno capped the comeback in the 72nd-minute pouncing on a rebound after Miguel Moya saved his penalty kick attempt. Moreno, a Spanish forward now has 15 goals between league and cup competitions this season. The victory boosts Espanyol into 12th place while Sociedad are two points back in 13th.

Villarreal bounced back from a pair of defeats by edging Las Palmas 2-0 on the road. Carlos Bacca scored the winner for Villarreal after 67 minutes, finishing from a fast break into the top-right corner. It was the Colombian’s 12th goal in all competitions this season. Alejandro Galves saw a straight red card after conceding a penalty for a foul on Nicola Sansone. The Italian substitute stepped up and slotted home Villarreal’s second on the afternoon, sealing the points for the visitors. Villarreal are in sixth place while Palmas are in 18th, four points from safety.

Werder Bremen hosts FC Koln on Monday in the final fixture of Round 26.

In their first match since the passing of their captain Davide Astori, Fiorentina defeated Benevento 1-0 at the Artemio Franchi. The match was stopped after 13 minutes to honor the 32-year-old who passed away last weekend in his sleep. Vitor Hugo headed Fiorentina in front from a corner kick in the 25th-minute for his first goal of the season. Christian Puggioni made four saves in the defeat for Benevento, while his teammates only created three shots on target. Fiorentina now have two clean sheets in their last two matches, which see them move up to ninth place. Benevento are 14 points from safety in last place.

Napoli have had a firm grasp on the top spot in Serie A this season, but have now dropped to second place following their 0-0 draw with Inter Milan on Sunday. The visitors had two shots on goal, but lacked the final product in front of net. Milan Skriniar had the best chance for either side, hitting the right post with a header after 48 minutes. The draw sees Napoli sitting two points back of Juventus, while Inter are in fifth place.

Lyon extended their unbeaten run to six matches as they downed Caen 1-0 at the Parc OL. After being held scoreless for an hour, the hosts got the breakthrough from Bertrand Traore who finished from a rebound after 63 minutes. The Burkina Faso international saw his previous effort saved by Remy Vercoutre, pounced on the rebound and made no mistake. Traore now has 11 goals in all competitions for Lyon, who remained in fourth place with the win. Caen was held to one shot on goal, dropping their second match out of their last three. The visitors sit in 12th place.

Scottish Premier League giants Celtic flexed their muscles on Sunday, defeating Glasgow rivals Rangers 3-2 in an Old Firm Derby at Ibrox Stadium. Josh Windass’ sensational season for Rangers continued as he gave the hosts a 1-0 lead after three minutes. Australian international Tom Rogic pegged Celtic level in the 11th-minute as he rifled home from long-range. Daniel Candeias’ right-footed finish regained the lead for Graeme Murty’s side in the 25th-minute, before Moussa Dembele drew the Hoops level in first-half stoppage time. Celtic centerback Jozo Simunovic was sent off in the 57th-minute after seeing a straight red for violent conduct. Two minutes after coming on as a substitute, Odsonne Edouard played the role of hero scoring his sixth league goal of the season. The PSG loanee put his name in Celtic folklore snatching the visitors a huge three points in their quest for another league crown. Celtic are nine points clear of Rangers in the table with the win.