USL Week 2 Rewind – Rowdies on a roll, Belmar scoring for Rangers at will, and more. 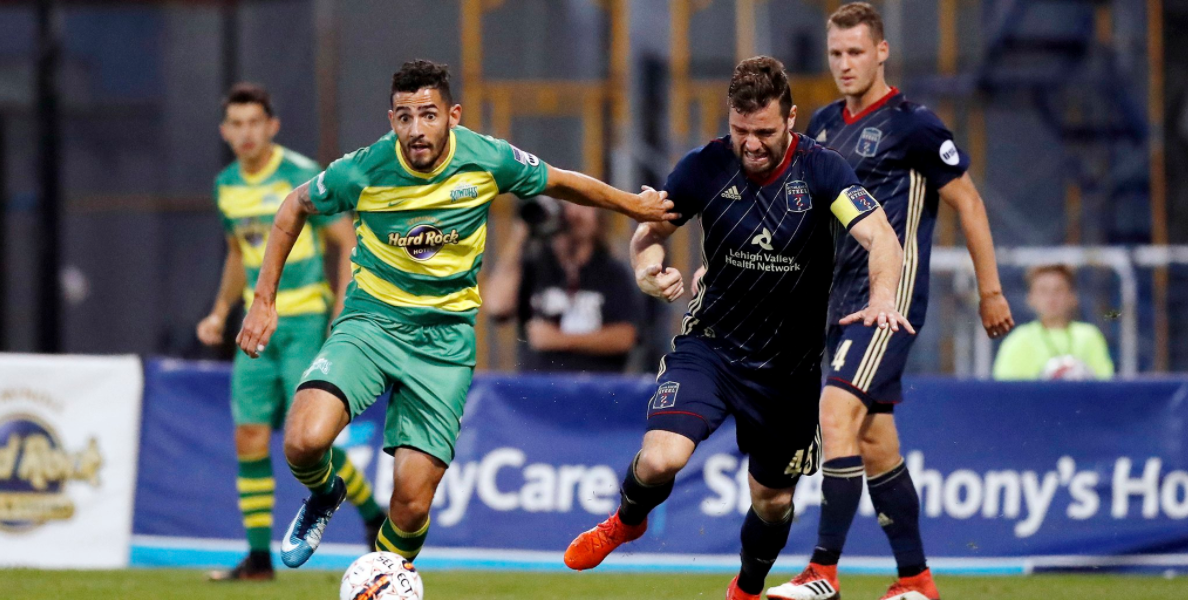 Week 2 of the 2018 USL season is in the books, and the early conference favorites are starting to stand out.

The Tampa Bay Rowdies improved to 2-0-0 on the year with a victory over Bethlehem Steel FC. The Rowdies impressed in 2017, and made some key additions in the offseason that are paying off with early season results.

Out west, Swope Park Rangers got another big performance from Kharlton Belmar. Belmar had already registered a pair of goals and assists in week 1, and he followed it up with another two goal performance Saturday night over the Seattle Sounders FC 2.

Let’s take a look at all the action from week 2:

Jack McInerney scored the game winner for newcomers Indy Eleven on their way to a victory over the Kickers in their season opener. McInerney got his body onto a cross at the back post from Soony Saad just before halftime in the 41st minute. The Kickers were never able to create much danger against a strong Indy Eleven backline, and the lone goal held up as the match winner.

Despite opening their inaugural USL campaign in front of the largest soccer crowd in the U.S. last weekend, Nashville SC failed to crack Bob Lilley’s Riverhounds and the sides split the spoils. A crowd of 18,922 fans came out to watch the home side, but had little to cheer about throughout a somewhat subdued 90 minutes. Matt Pickers did his part to stop the Riverhounds in the second half, and each side left with a point for their troubles.

The game that didn’t happen. If you tried to find the stream or highlights from ATL 2’s first match, you would come up empty, and it is a shame for ATL 2 fans. Jon Gallagher put on a show for those in attendance, scoring twice and adding an assist to down the Red Bulls II. Yosef Samuel and Gallagher proved to be a strong forward pairing, with each involved in all goals scored for ATL in their opening win. While the Red Bulls II will walk away disappointed in their defensive showing, rookie Brian White managed to get his name onto the scoresheet in week 2, briefly leveling the match in the 33rd minute before the Red Bulls II fell behind for good in the 41st minute.

The Battery got their first win of the season over rebranded Penn FC at home Saturday night. Despite holding possession early, the Battery weathered the storm and came out for a strong second half. It was Ataulla Guerra who finally broke the deadlock in the 62nd minute. Guerra bought himself space with some fancy footwork and fired past Romuald Pelser for the game winner. Despite the victory, not all was well for the Battery. Second half substitute Patrick Okonkwo received a red card just 16 minutes into his shift to see the home side finish down a man.

Jorge Herrera and Caleb Calvert provided the goals for the Independence to earn their second win of the 2018 campaign. Both goals came in the first half, with Herrera scoring on a breakaway in the 18th minute. Calvert put the game away in the 42nd minute, latching onto a ball from Alex Martinez. TFC II failed to offer a threat to the home side, and dropped their second straight road game to start the season.

After an impressive win to open 2018, Steel FC was overwhelmed by the Rowdies at home in their 2-0 loss. They came out strong, creating chances through Marcus Epps and Cory Burke but failing to capitalize on them. Just before halftime, Leo Fernandes appeared to have opened the scoring, but his shot was ruled to have been cleared before it had crossed over the line. In the 62nd minute, Georgi Hristov finally opened the scoring with a headed goal on a Jack Blake free kick. Six minutes later, Leo Fernandes made up for his earlier disallowed goal with a terrific low finish to the far post. The Rowdies improve to a perfect 2-0-0 to start the season.

Augustine Williams delivered the late winner for the Timbers 2, their first since September 30th. Switchbacks goalkeeper Steward Ceus failed to control a shot from Lamar Batista, and Williams pounced on the loose ball in the 82nd minute. The Switchbacks could not find an answer to unlock the Timbers 2, and could not claw their way back into the match.

The Roughnecks looked to have sealed the game late in the second half before two quick strikes in the final minutes of the game left them winless through two. Corey Baird latched onto a cross from Maikel Chang to open the scoring for the Monarchs in the seventh minute. Despite their best efforts, the Monarchs could not add to their lead, and early in the second half Joaquin Rivas made the visitors pay, scoring on a low cross by Paris Gee to level the match. Rivas struck again in the 83rd minute to give the home side the advantage on a rebound. With the game seemingly out of reach, Chandler Hoffman and Charlie Adams stole all three points for the Monarchs with goals in the 89th and 90+ minute.

STLFC struck first, but SAFC had the last laugh. It took all of two minutes for Saint Louis to get on the board when Kyle Grieg caught the San Antonio backline napping and put his glancing header into the back of the net. The goal seemed to wake SAFC up, and they responded with a goal of their own in the 21st minute from Mikey Lopez. Kris Tyrpak provided the assist with his head for Lopez. Lopez would repay his teammate by providing a similar cross the goal mouth assist to Tyrpak in the 60th minute. The goal proved to be the winner, and it was SAFC’s first of the season.

Kharlton Belmar is putting his stamp on 2018, with another two goal performance to give the Rangers a victory over Sounders FC 2. This one was a shoot out. David Estrada opened the scoring in the 19th minute, but it was short-lived. Belmar and Rodrigo Saravia struck back for the home side in the 21st and 25th minutes. Colton Storm added a third for the Rangers in the 52nd minute with Estrada scoring for Sounders FC 2 in the 56th minute for his second of the night. Belmar put the game to bed just five minutes later to complete his brace and give the Rangers their second straight victory.

The Foxes earned their first point in USL with a late equalizer to share the points with Los Dos. The visitors grabbed the lead in the 3rd minute on an own goal by Mickey Daly on a corner kick for the Galaxy. The Foxes were given a reprieve however when Justin Dhillon was sent off for an ugly challenge on Zach Hayden-Ellis. With the man advantage, the Foxes began to creep back into the game in the second half, peppering the Los Dos goalkeeper with shots. Eventually, the Foxes found the breakthrough from Alex Cooper who stole the ball deep in Los Dos territory and turned in a low hard shot to the back post from the top of the box. From there, it looked like the Foxes might steal a winner, but could not beat Wade Hamilton.

Try as they might, OCSC could not hold off a strong Sacramento Republic team who won their second consecutive victory with a goal from Cameron Iwasa. Iwasa’s display of skill opened up the space he needed to find a shot, and he cut inside blasting home a powerful effort to lift the visitors to victory. OCSC did their part on the night, but the Republic’s defense was up to the task and kept the home side from creating truly dangerous chances.

Chris Cotez’s big night launched Phoenix Rising over OKC Energy by a comfortable margin. Cortez scored a hat trick and provided the opening assist in the victory leaving OKC scrambling for answers. Goals in the 28th, 45th, and 83rd minute but the game out of reach for the Energy, but they did manage to pull one back through Christian Ibeagha in the 85th minute. Cortez made sure to close out the match by burying his third of the night in the 90+4 minute.

The inaugural edition of the Silver State Cup didn’t live up to the hype. The Lights and 1868 FC scored within a minute of each other, but otherwise played a subdued match. First, Alex Mendoza got on the board for the Lights, cleaning up a corner kick in the 27th minute. Danny Musovski levelled the match for 1868 one minute later, following up a parried shot from Brian Brown. Even with a man advantage, thanks to a red card to goal scorer Danny Musovski wasn’t enough for Lights to snatch a winner, but they are now undefeated in their first two matches.