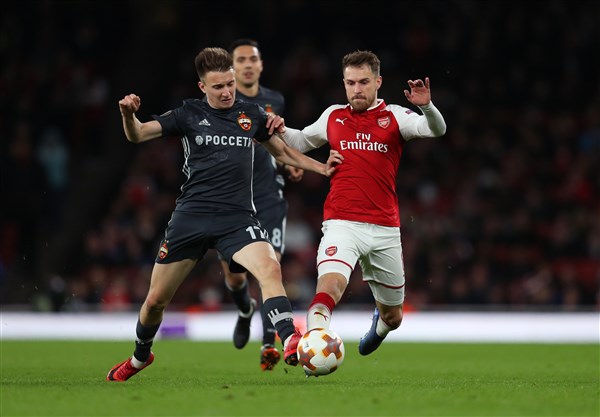 After a dominant first leg win in London last week, Arsenal knew they could sit back some in their second leg tie against CSKA Moscow. Arsene Wenger’s side received an early scare but held on for a 6-3 aggregate victory against the Russian Premier League side on Thursday to advance to the semifinals.

Fedor Chalov’s close range finish in the 39th minute opened the scoring for the hosts in Moscow, who led 1-0 at halftime. Kirill Nababkin’s right footed finish in the 50th minute made things interesting as Moscow cut the aggregate to 4-3. However, that was the closest the hosts would get as Arsenal shut the door on any comeback. Danny Welbeck slid home Mohamed Elneny’s through ball assist in the 75th minute to extend Arsenal’s lead before Aaron Ramsey added an insurance goal in stoppage time. The Gunners only realistic chance to make the Champions League next season is through winning the Europa League final, after an up and down EPL campaign.

However it was the visitors who opened the scoring as Will Bruma found the back of the net in the second minute. Marseille fought back through the way of an Stefan Ilsanker own goal in the sixth minute to level the score at 1-1. Bouna Sarr gave Marseille the lead, scoring from a rebound in the ninth minute. Florian Thauvin extended the lead to 3-1 in the 38th minute, scoring his 19th goal in all competitions. Jean Kevin-Augustin pulled one back for Leipzig early in the second half, but that was the last tally for the visitors. Dimitri Payet finished Thauvin’s assist in the 60th minute before Hiroki Sakai added a goal from long-range in stoppage time. Marseille will seek to make the finals for the first time since 2004.