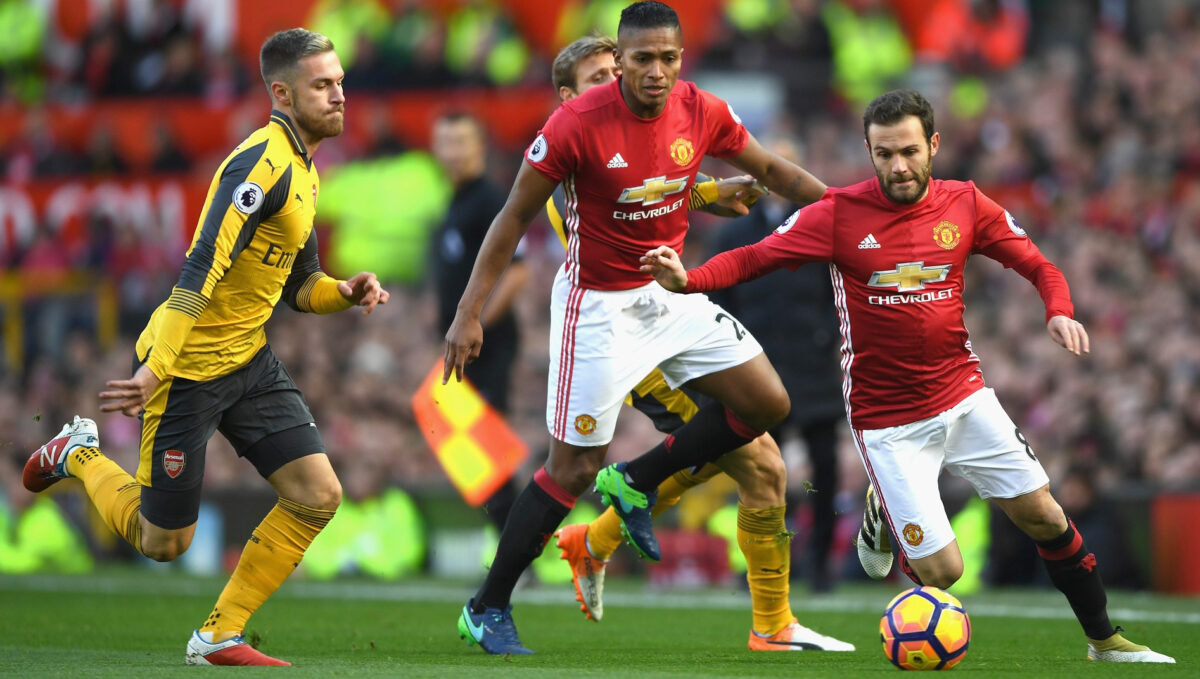 European domestic action continues this weekend with two of England’s historic clubs squaring off in a top six showdown.

Manchester United welcomes Arsenal to Old Trafford on Sunday in hopes of bolstering their chances for a second-place finish. Jose Mourinho’s side are winners of their last two matches, most recently booking their place into the F.A. Cup final this May. Romelu Lukaku leads the team with 16 league goals while Paul Pogba has 10 assists.

Arsenal is coming off a 4-1 beatdown against West Ham United last Sunday, where Alexandre Lacazette netted a brace. The Frenchman leads the Gunners with 13 league goals this season.

Elsewhere in Europe, Real Madrid welcomes Leganes to town in Spain while Inter hosts Juventus in Italy. Napoli also faces a tough test in Serie A as they travel to Fiorentina. Schalke hosts Borussia Monchengladbach in the Bundesliga match of the round. Lyon faces off with Nantes on Saturday in Ligue 1 play.

West Ham will look to distance themselves from the bottom three as they welcome Manchester City to the London Stadium on Sunday.

The Hammers are six points clear of the relegation zone, sitting in 15th place. David Moyes’ side iscoming off a 4-1 thumping at Arsenal last weekend, where they conceded three goals in the final 10 minutes. Austrian winger Marko Arnautovic leads the team with 10 goals this season.

Real Madrid will look to continue pressing for a runners up finish in La Liga, as they host Leganes at the Santiago Bernabeu on Saturday.

Zinedine Zidane’s team is unbeaten in their last three matches, defeating Bayern Munich 2-1 last time out. Cristiano Ronaldo leads the team with 39 goals in all competitions this season, but was held goalless midweek.

Leganes iswinless in their last two matches, losing 2-1 to Villarreal and tying 0-09 against Deportivo respectively. Brazilian midfielder Gabriel leads the team with five goals in league play this season.

Barcelona knows a win at Deportivo on Sunday will clinch them the 2017-18 La Liga title after lifting the Copa Del Rey last weekend.

Ernesto Valverde’s side rolled past Sevilla, 5-0, in Madrid last weekend, lifting their first trophy of the campaign. The Catalan side will be favored to get the job done on Sunday, facing a team fighting for their top-flight lives. Lionel Messi leads Barcelona with 29 goals this season.

Schalke will look to get back to winning ways as they welcome Borussia Monchengladbach to the Veltins-Arena on Saturday.

The hosts have had a rough two weeks, being eliminated at the German Cup semifinal round and seeing a two-goal lead slip in league play at Cologne. Schalke are two points ahead of rivals Borussia Dortmund for the race for second place, and will be favored to get a win at home this weekend.

Gladbach is in eighth place and are 2-1-2 in their last five league matches. A 3-0 home triumph against Wolfsburg last weekend saw Gladbach score a trio of first-half goals for the win. Belgium playmaker Thorgan Hazard leads the team with nine goals this season.

Inter Milan faces a tough test this weekend with the arrival of league leaders Juventus to the San Siro on Saturday.

Inter has won of its last two matches, but have only won once against the current top four this season. Mauro Icardi has been huge for Inter this season, leading the team with 26 goals.

Juventus knows that Napoli is right on their tail in the race for the Scudetto. A 1-0 home defeat to Napoli a week ago, has seen the gap close to one point with four matches remaining. Paulo Dybala leads Juventus with 21 league goals this season, but has failed to score in his last three outings.

Napoli will continue to press Juventus in the Serie A title race as they travel to Fiorentina on Sunday.

Maurizio Sarri’s men received a huge 1-0 win over Juventus last weekend and now sit a point behind the Turin side in the standings. Napoli is unbeaten in their last seven matches and are in good form at the right time. Spanish winger Jose Callejon has nine goals and nine assists in league play this season for Napoli.

Fiorentina has lost their last two matches, falling to Lazio and Sassuolo respectively. French midfielder Jordan Veretout has eight goals for Fiorentina this season, and will be huge if the hosts want to play very freely against their opponents.

A pair of top-half sides will square off this weekend in France as Lyon welcomes Nantes to town on Saturday.

The hosts are winners of five consecutive matches, scoring two goals or more in all five. Lyon currently has four players who have hit double digits in goals this season, with in-form Memphis Depay sitting on 15.

Nantes hasdipped in the table lately, dropping to ninth in recent weeks. Claudio Ranieri’s men are winless in their last five matches, losing two and drawing three. Argentine striker Emiliano Sala has 12 goals for Nantes this season, but was sent off in last weekend’s 1-1 draw vs. Rennes.