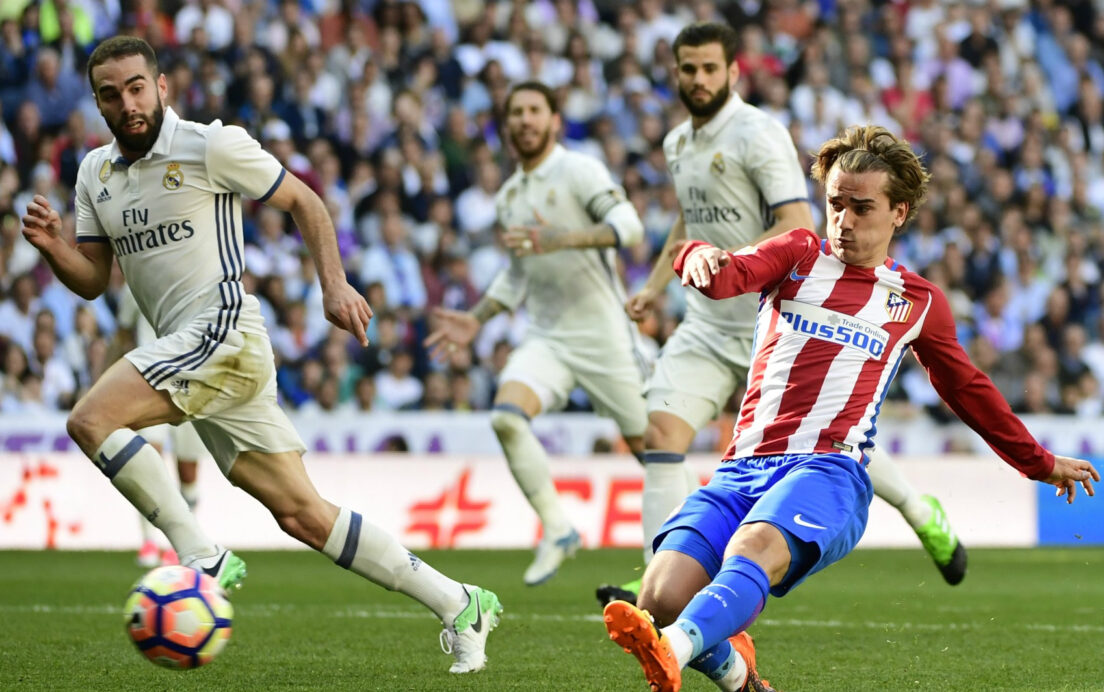 The Manchester Derby may take centerstage on Saturday, but there’s also another historic rivalry match that will grab your attention on Sunday.

Sunday’s lunchtime kickoff comes from the Santiago Bernabeu as Real Madrid entertain rivals Atletico Madrid. The hosts defeated Juventus, 3-0, in their UCL first leg quarterfinal draw, thanks to a pair of beautiful goals from Cristiano Ronaldo. Ronaldo has boosted his production in the calendar year, totaling 23 goals since the start of 2018.

Atletico is unbeaten in its last two matches, defeating Deportivo and Sporting Lisbon. French forward Antoine Griezmann has 17 goals since the start of 2018 as well, which has helped Atletico remain in the fight for the La Liga title. Diego Simeone’s side boosted their chances of advancing in the Europa League following Thursday’s 2-0 first leg win over Lisbon at home.

Elsewhere in Europe, Everton faces Liverpool in a Merseyside Derby at Goodison Park. The Manchester Derby occurs on Saturday also in the EPL as Manchester City face Manchester United at home. Also in Spain, Valencia hosts Espanyol to close out the day’s action. AS Roma entertains Fiorentina in Serie A play, while PSG travels to St. Etienne on Friday in France’s top-flight. The top fixture in the Bundesliga closes out the round on Monday as RB Leipzig hosts Bayer Leverkusen.

Manchester City have been one of the top sides in all of Europe this season, only losing once in the  Premier League. Pep Guardiola’s team will look to clinch their third league title out of the past seven seasons as they host local rivals Manchester United on Saturday.

The hosts may have had a tough week in the Champions League, but they will win the league title with three points at home this weekend. Gabriel Jesus returned to the City lineup last weekend, and netted his 12th goal in all competitions this season. United, who sit 16 points back do not have second place wrapped up just yet. The Red Devils have won their last two fixtures after being eliminated from Europe in mid-March. Romelu Lukaku has 15 league goals for Jose Mourinho’s side in his first season with the club.

Saturday’s early action comes from Merseyside as Everton welcomes rivals Liverpool to Goodison Park. The hosts fell, 3-1, last weekend at home against Manchester City, which was their second defeat in the month of March. Sam Allardyce’s side are in ninth place in the league table, and have not earned a home points against the Reds since October 2015.

Liverpool is still riding the high of rolling past Manchester City 3-0 midweek in their first leg quarterfinal match-up in the UEFA Champions League. Jurgen Klopp’s men are winners of their last three fixtures overall but could miss leading scorer Mo Salah who limped off midweek. Brazilian forward Roberto Firmino (14 league goals) is second on the team this season.

The finale of Sunday’s action comes from Mestalla as Valencia hosts Espanyol. The hosts are unbeaten in their last eight fixtures, winning seven of those eight. Four consecutive league wins have seen Valencia remain close to Real Madrid in hopes of finishing above the Spanish powerhouse. Valencia poses a trio of attacking talent (Rodrigo, Simone Zaza, Santi Mina) who are have double-digit goals in league play this season. Espanyol drew, 0-0, with Alaves last weekend, and only have two league wins since the start of the new year. Spanish forward Gerard Moreno leads the team with 12 goals, with seven coming since the start of January.

Four points separate the teams in Friday’s opening match this weekend as Hannover welcomes Werder Bremen to town. Hannover have lost their last five matches, and are in danger of falling into the bottom three. Niclas Fullkrug leads the team with 11 goals this season, including six since the start of 2018. Bremen are unbeaten in their last five matches, winning four of those five. German forward Max Kruse has been a two-way offensive player for Bremen, scoring six goals and adding six assists in 23 appearances this season. Bremen rolled past Hannover 4-0 in their first meeting this season back in November.

A pair of top-seven sides are set to square off on Sunday as Eintracht Frankfurt hosts Hoffenheim. Frankfurt is holding onto the final European qualification spot, but just barely with a three-point lead over Hoffenheim. Frankfurt fell at Werder Bremen last weekend, which was only their fourth loss of 2018. Sebastian Haller has eight goals this season for Frankfurt which leads the team. Hoffenheim are on a strong run, going unbeaten in their last five matches. A 6-0 thrashing of Cologne last weekend saw both Mark Uth and Serge Gnabry each net braces. The pair combined with Andrej Kramaric have tallied 28 goals this season.

Saturday’s premier fixture sees Fiorentina travel to the Olimpico for a date with AS Roma. The hosts have won the last two meetings between these sides, but are still fighting off competition in the race for third place. Edin Dzeko has 19 goals in all competitions this season for Roma, which is 20 less than he tallied all of last year. Fiorentina are winners of their last five matches, allowing just one goal in that span. Despite not having any double-digit goalscorers on the team so far this season, Fiorentina can look to strikers Giovanni Simeone and Federico Chiesa for production.

A pair of top-half sides square off on Sunday as Inter Milan makes the trip to Torino. The visitors are unbeaten in their last five fixtures, winning three of those five. The more impressive note is Inter has not conceded in their last five matches, while Mauro Icardi leads the club with 24 league goals. Torino are in 10th place following a pair of victories back-to-back. Strikers Iago Falque and Andrea Belotti have combined for 20 goals and 10 assists this season, and will be the pair to watch for the hosts on Sunday.

Friday sees Round 32 of Ligue 1 get underway as league leaders PSG travel to St. Etienne. The visitors are winners of their last four matches, scoring 12 goals in that span. Unai Emery’s side recently captured the Coupe de la Ligue title following Edinson Cavani’s brace over Monaco. St. Etienne are unbeaten in their last nine matches which sees them sitting in ninth place on 42 points. Despite not having a double-digit goalscorer on their roster, St. Etienne has received goals from 12 players this season. Jonathan Bamba leads the way with six tallies in 27 matches.