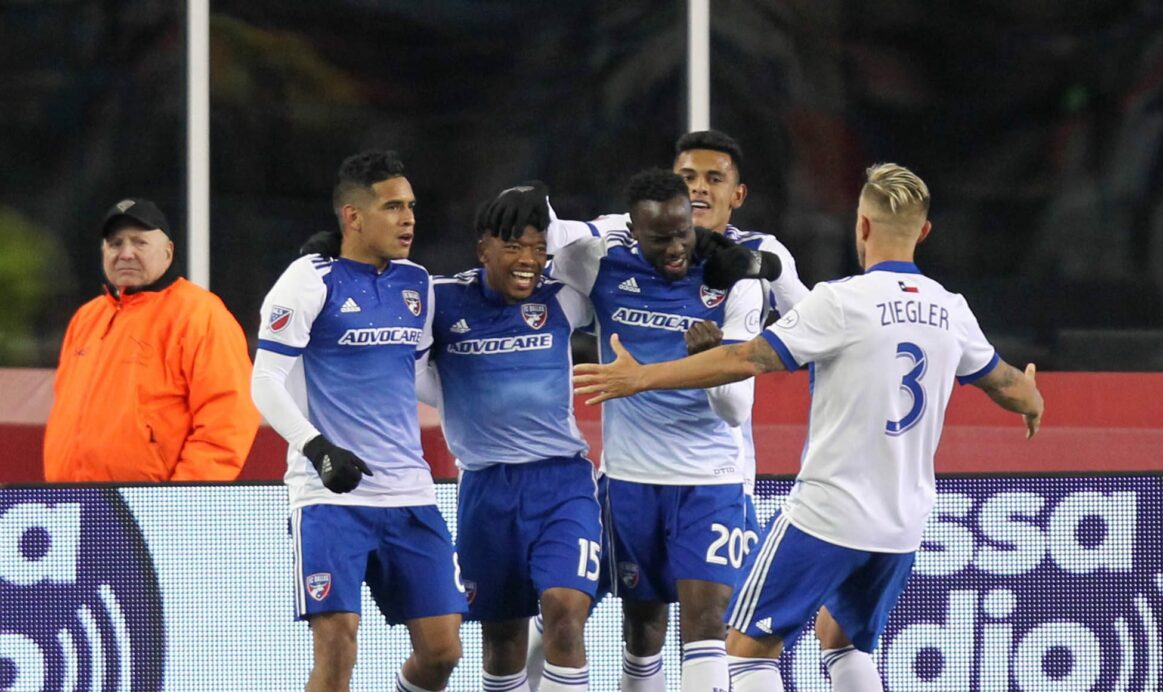 FOXBOROUGH, Mass. — When FC Dallas announced in late February that Kellyn Acosta would miss up to two months following a sports hernia surgery, the big question was question was whether 2017 first-round pick Jacori Hayes could bridge the gap until the star midfielder returned.

The 22-year-old Wake Forest graduate has been more than adequate over FC Dallas’ unbeaten five-game stretch to start the 2018 season, starting every game and going the full 90 minutes in four of them.

“I think I’m doing the most with what I have been given and I’m just going to keep competing and try to get those same opportunities next week,” Hayes told SBI Soccer. “There’s a lot of noise out there, but just do what got me here and keep working each week.”

After scoring the 76th-minute winner on the road against the New England Revolution on Saturday night, coach Oscar Pareja may have a different question on his hands: How can he continue to find Hayes minutes when Acosta returns and reclaims his starting spot?

“He’s growing,” Pareja said of the second-year midfielder. “He’s made us feel very proud about what he’s doing on the field, the personality and the care that he has for the game and the commitment. All these things show is that we’re on the right path with him and he’s not just taking advantage of that opportunity, but he’s showing us all that we have a great player.”

Hayes played sparingly in his rookie season, making just three appearances, but has started to establish himself in MLS with an impressive start to 2018.

Two games prior, Hayes put in a yeoman’s work to set up Roland Lamah’s goal in a 1-1 draw versus the Portland Timbers for his first MLS assist.

On Saturday, the midfielder again showed his work rate by starting and finishing the only goal in a 1-0 FC Dallas victory.

“I almost cried in the celebration and the last 10 minutes of the game felt like forever,” Hayes said. “It was a very happy moment for me and I’m glad we could get the three points on the road.”

The play started with Hayes pouncing on a loose ball and sending it to Santiago Mosquera out on the right wing, who subsequently crossed it in to Lamah in the left side of the box.

With the Revolution’s defense standing flat-footed, Hayes ran into a pocket of space and one-touched a low shot inside the left post.

“I saw Rolly had the ball on the side and I was just going to dart in and see what happens,” Hayes recalled. “If no one picked me up, I was going to be open. I’m glad he found me and I’m just happy I could get something on it and put it near post and past the keeper. I’m just really happy right now.”

Pareja’s 68th-minute substitute, bringing on midfielder Carlos Gruezo for forward Maxi Urruti ended up paying dividends as it allowed Hayes to venture further forward than he might otherwise have done.

“I knew I had the freedom to go up a little bit,” Hayes said. “The formation’s a little bit more defensive as well with three guys trying to lock down that middle, so just kind of picking and choosing and being smart, but knowing I had Victor (Ulloa) and Carlos behind me to go forward.”

In addition to his recent offensive prowess, Hayes has also made a big impact in the center of the pitch, with FCDallas.com reporting that he leads the team in interceptions (12), recoveries (43) and tackles (21), including a team-high 13 recoveries and 10 tackles on Saturday.

“He’s doing a very complete game,” Pareja said. “He’s helping us today to get three points, putting in the goal. It’s great news to have the young boys doing their job and embracing the opportunity and making the most of it.”