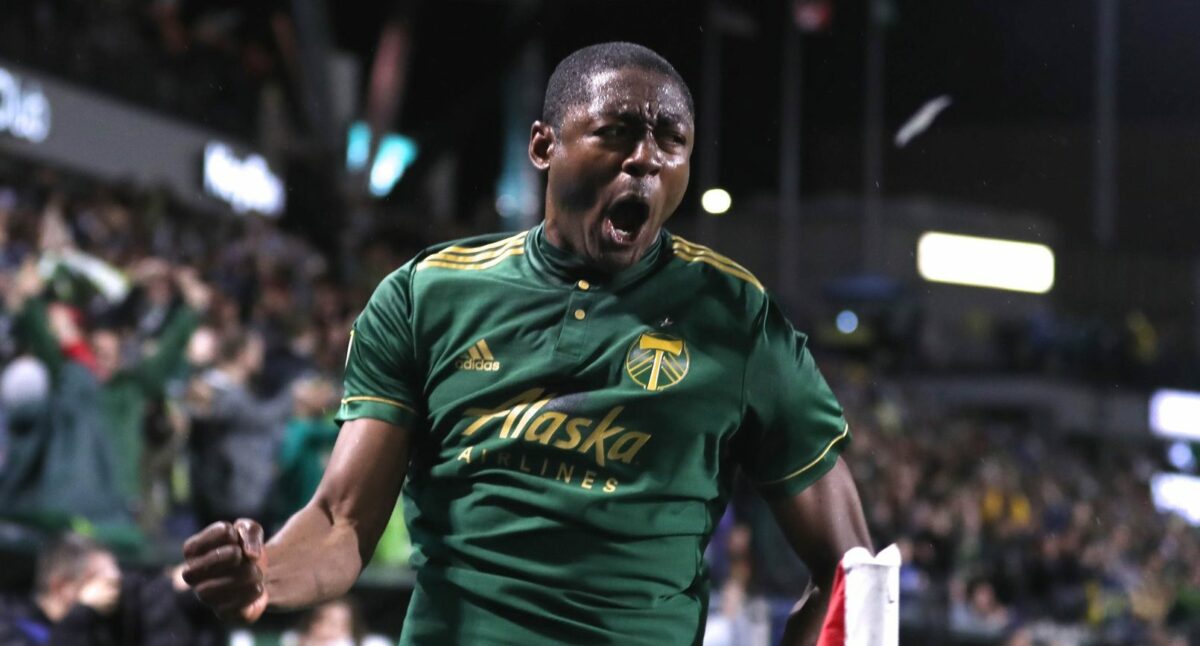 Following a busy midweek period headlined by Champions League action, MLS is back this weekend with some intriguing clashes.

Action began on Friday night, as Orlando City took down the Philadelphia Union while LAFC toppled the Vancouver Whitecaps. On Saturday, there are seven additional games on the schedule, starting with the New York Red Bulls’ clash with the Montreal Impact.

The SBI team will be providing in-game updates on post-game breakdowns of  game, so follow along throughout what will certainly be a busy Saturday of MLS action. Also, feel free to share your thoughts and opinions on today’s action in the comments section below:

A goal and assist from Alvas Powell helped the Portland Timbers record their first win of the season.

Powell’s right-footed strike in the 20th minute opened things for Portland, before the fullback set up Diego Valeri in the 23rd minute.

Minnesota looked to have cut the lead in half in the 25th minute through Miguel Ibarra but referee Jose Carlos Rivero overturned the decision via VAR.

Darwin Quintero marked his MLS debut with a goal in the 64th minute. Quintero dribbled past Diego Chara and Zarek Valentin before slipping a shot past Jake Gleeson.

Fanendo Adi scored his first goal of 2018 to give Portland a two-goal lead in the 74th. He nearly scored a second shortly after, but VAR ruled he was offside.

A Bill Tuiloma own goal in the 81st minute has made things interesting at Providence Park, cutting the Timbers lead in half.

Man of the Match: Alvas Powell’s attacking contributions, coupled with his defensive effort, made him the easy pick.

Moment of the Match: Powell’s jaw-dropping dribble and near-post finish was a Goal of the Week favorite.

Match to Forget: Miguel Ibarra had one goal erased by VAR (correctly for offside) and had Gleeson deny another goal-bound header with a wonder save.

Jahmir Hyka scored on a deflection in the 85th minute to help San Jose earn a draw against the Houston Dynamo.

Earlier in the second half, Mauro Manotas raced onto an Alberth Elis cross in the 63rd minute to give the Dynamo a 2-1 lead. Elis beat Nick Lima down the right flank before depositing the go-ahead assist.

Tomas Martinez needed just three minutes to deliver a second-half equalizer for the Dynamo, canceling out Magnus Erikkson’s 26th-minute finish. Erikkson collected a Jackson Yuiell pass at the top of the box and belted a low 20-yard shot past Chris Seitz for the game’s opening goal.

Man of the Match: Tomas Martinez was the best player on the field, scoring a goal, registering three shots on goal, along with three key passes, including an assist on Houston’s second goal.

Moment of the Match: Jahmir Hyka’s late equalizer needed a deflection, but he has made a habit of late-game heroics.

Match to Forget: Yefferson Quintana not only turned the ball over to start the sequence leading to Martinez’s goal, but he also managed to miss a chance to block Martinez’s shot, which hit him before going in.

The New England Revolution may have controlled possession and manage 10 more shots than FC Dallas on Saturday night at Gillette Stadium, but it was the visitors who had the last laugh, coming away with a 1-0 victory after a 76th-minute goal by Jacori Hayes that made the difference.

Santiago Mosquera crossed the ball in from the right side and Roland Lamah controlled and centered to the incoming Hayes as the Revs were caught watching while Hayes’ sent a low finish inside the left post.

The Revolution managed 21 shots but couldn’t find the back of the net. FC Dallas goalkeeper Jimmy Maurer made six saves to notch his second shutout of the young season.

Referee Hilario Grajeda denied the Revs appeal for a penalty when Krisztian Nemeth went down in the box during second half stoppage time.

Man of the Match: Give Jacori Hayes the credit he deserves as he has made the most of his opportunity to start this season by putting away his first MLS goal. It comes just two matches after the 2017 first rounder picked up his first assist.

Moment of the Match: It was a nice bit of teamwork by FC Dallas to pocket the only goal of the match to escape with all three points in a tough road venue. Mosquera’s ball in was great, Lamah showed patience and Hayes ambition on his run in.

Match to Forget: The right side of the defense continues to be a problem area for the Revolution. Coach Brad Friedel has banked on opponents not being able to make the Revs pay for their high pressing and he’s mostly been right. This time, however, it was just a misplay by right back Andrew Farrell and center back Jalil Anibaba getting caught flat-footed in the box

D.C. United needed less than a minute to open the scoring against the Columbus Crew, with midfielder Ulises Segura scoring just seconds into their Eastern Conference clash. Segura hit a perfect shot, rifling a Paul Arriola pass into the net to give D.C. an advantage it carried into halftime.

Arriola was dismissed in the second half, making matters a bit difficult for D.C. The midfielder was issued a straight red in the 51st minute, leaving D.C. defending a one-goal lead with 10 men.

They did just that, outlasting a Crew team that fired 22 shots to D.C.’s five.

Man of the Match: Frederic Brillant was rock solid for D.C., helping protect a lead for a team down a man.

Moment of the Match: Segura’s goal set an early tone and gave D.C. United an early advantage that held up for all 90 minutes.

Match to Forget: The entire Crew attack was wasteful,as Federico Higuain, Gyasi Zardes and Pedro Santos combined for 10 shots with only two on target

Some nasty weather in Chicago, but Zlatan Ibrahimovic’s first start saw both a goal and a win.

The Swedish star scored his third goal of the MLS campaign just moments before halftime, scoring on an assist from Ashley Cole. It was a perfect ball in from the English star, as Ibrahimovic headed in a close-range finish for the third goal of his MLS career.

Ola Kamara appeared to have fired the Galaxy into the lead just minutes into the match, but the goal was ruled back via the offside flag. The Galaxy would end up being just fine, winning for the second time in three matches since Ibrahimovic joined the fold.

Man of the Match: While Ibrahimovic will earn the headlines, David Bingham had a strong game in goal, making four saves.

Moment of the Match: As if there was any doubt, Ibrahimovic’s goal was the game-changer that sealed the Galaxy win.

Match to Forget: Cast into a starting role, Alan Gordon failed to find much chemistry with Nemanja Nikolic, who was held relatively quiet as well.

With a CONCACAF Champions League final first leg looming on Tuesday, Toronto FC fielded a lineup made up almost exclusively of reserves, and Colorado took full advantage to record a big home win.

It took just two minutes for the Rapids to get on the board as Jack Price found the corner from just outside the box. The goal came from a mishit clearance as Price jumped on the ball, took a touch before firing past Clint Irwin.

The Rapids received a bit of insurance in the late stages as Shkëlzen Gashi scored a penalty kick to ice the game.

TFC’s reserve-filled lineup, which only included one regular starter (Drew Moor), failed to find a breakthrough in a fairly even match. While Jordan Hamilton’s shot hit the post for TFC, the Rapids were actually the more active team throughout the match.

Man of the Match: Jack Price scored his first goal for the club, and it was a good one as the Rapids midfielder sealed the victory.

Moment of the Match: Gashi’s penalty kick iced the match, sealing a solid victory for a Rapids team that will be plenty happy with the three points.

Match to Forget: Tosaint Ricketts has long been a solid option off the bench for TFC, but the Canadian forward struggled to find much of anything in the defeat.

Saturday’s first match saw the New York Red Bulls show no signs of a Concacaf Champions League hangover, as they rolled to a comfortable win at Red Bull Arena.

The Red Bulls scored five minutes into the match when Florian Valot found Bradley Wright-Phillips making a run, and the forward made up the ground between him and the goal before finishing from close range. \

The Impact eventually got back in the game, and were able to show for it with a goal of their own. Jeisson Vargas scored directly from a freekick several yards away from the penalty area, and the half finished with the two teams tied.

The home side picked up their game winner after 57 minutes, with young designated player Alejandro Romero Gamarra scoring his first MLS goal. Wright-Phillips received the ball near the touchline, and spotted Gamarra running into the box. The Argentine hit the ball first time from an angle and saw his shot find the back of the net. A third came in the 76th, as Kemar Lawrence’s pass in front of goal was tapped in by Michael Murillo.

Man of the Match: Wright-Phillips’s hot streak continues, adding to his collection of goals and assist this season by picking up one of each against Montreal.

Moment of the Match: Gamarra’s arrival was met with much fanfare, and he lived up to it with his first MLS goal. It was a hard strike after a long run into the penalty area, leaving goalkeeper Evan Bush with not much to do and the crowd at Red Bull Arena cheering.

Match to Forget: It was not a great day for Montreal left back Jukka Raitala, who saw the Red Bulls run up and down his flank, including goalscorer Murillo.