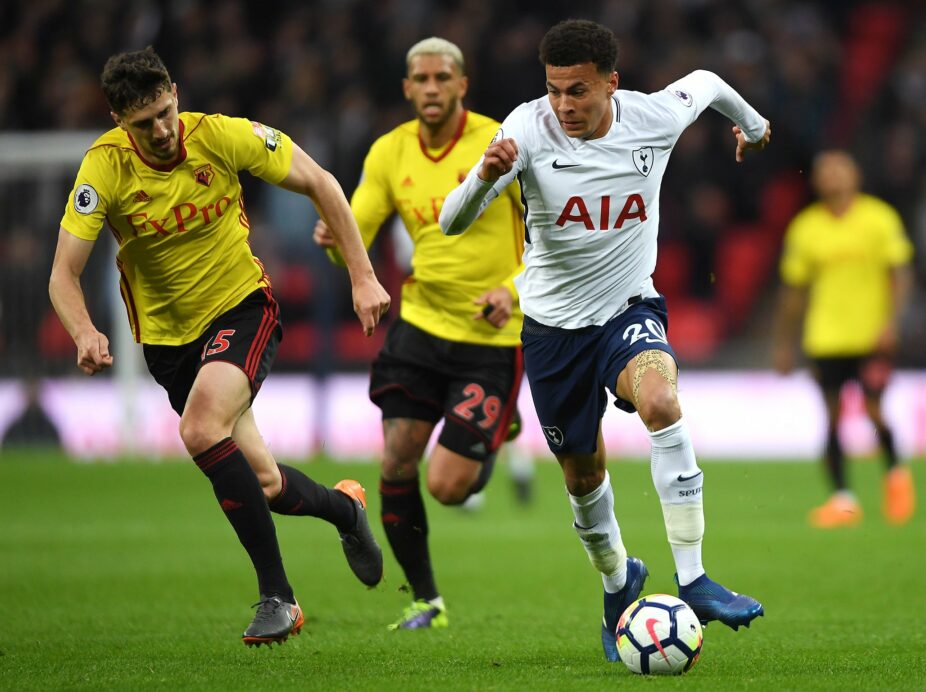 Tottenham may have seen their chances for trophies this campaign come to a close, but that hasn’t stopped them from seeking a top-four finish in the Barclays Premier League.

Mauricio Pochettino’s men concluded Round 36 on Monday with a comfortable 2-0 win over Watford. Dele Alli took advantage of a blunder by Watford keeper Orestis Karnezis to open the scoring at Wembley Stadium in the 16th minute. Christian Eriksen pounced on the error and hit Alli for an easy finish for his 15th goal of the season in all competitions.

Andre Gray missed a golden chance before halftime to level the score, but Hugo Lloris’ right-footed kick save kept Spurs ahead. Harry Kane continued his fight for the Golden Boot, doubling Spurs’ lead in the 48th minute. The English forward got on the end of Kieran Trippier’s assist and slotted past Karnezis for his 27th league goal of the campaign.

Lloris made three saves in the clean sheet, while Watford’s woes on the road continued. Javier Garcia’s men are now 4-12-2 on the road this season, and currently sit in 13th. Tottenham is in fourth on 71 points and still have a chance at a runners-up finish with three matches remaining.

Javier Hernandez’s return to the Premier League this season was expected to add a top talent to not only the league but also West Ham United.

The 29-year-old has found his return tough to say the least and is already considering a move away after his first season in London. Hernandez’s representatives are already looking at new clubs, with the Mexican international’s playing time dropping under David Moyes according to ESPN.

Hernandez has scored eight league goals in 28 appearances for the Hammers this season, but has not started each of the last five matches.

Reports said West Ham are open to the idea of listening to offers for Hernandez, as long as they are able to recoup most of the £16 million fee they paid for him. MLS, China, and Turkey are three possibilities for Hernandez to choose that could easily offer him more playing time.

West Ham is currently sitting in 15th place with 35 points earned, and are three points clear of the relegation zone.

Antoine Griezmann’s name has been in the media a lot over the last several seasons in regards to a possible move away from Atletico Madrid.

The Frenchman was linked with Premier League giants Manchester United last season before signing a new deal with the La Liga side. According to ESPN, the new contract included a €100 million release with Barcelona prepared to trigger this summer.

Griezmann who is expected to feature for France in this summer’s World Cup, stated he wanted his future resolved before the start of the tournament. Following Atletico’s 1-1 draw vs. Arsenal last Thursday, the 27-year-old spoke to reporters about if he would remain in Madrid next season.

“I don’t know,” he said. “We are talking to the club, and we will see what happens.”

“I like it here, you can see that on the field — I work hard, battle, score goals,” he added. “I am happy, and that is what is most important to me.”

Griezmann has 79 goals in 141 appearances with Atletico Madrid since joining in 2014.

Mohamed Salah’s stock for Liverpool continues to rise as the season goes on. The Merseyside club will be thankful that the Egyptian did not face punishment following a clash with Stoke’s Bruno Martins Indi this past Saturday.

According to Goal, Salah could have faced a three-match ban and had been charged after appearing to have thrown an arm at the Dutch defender as they completed for a throw in during Saturday’s league fixture. The F.A. confirmed that a panel of ex-referees decided it was not an incident of violent conduct following a review of the footage.

Salah has tallied 43 goals in all competitions, helping Liverpool to a current third-place spot in the Premier League and a semifinal appearance in the UEFA Champions League. Liverpool will next look to close out Roma on Tuesday as they hold a 5-2 aggregate lead as they travel to the Olimpico.