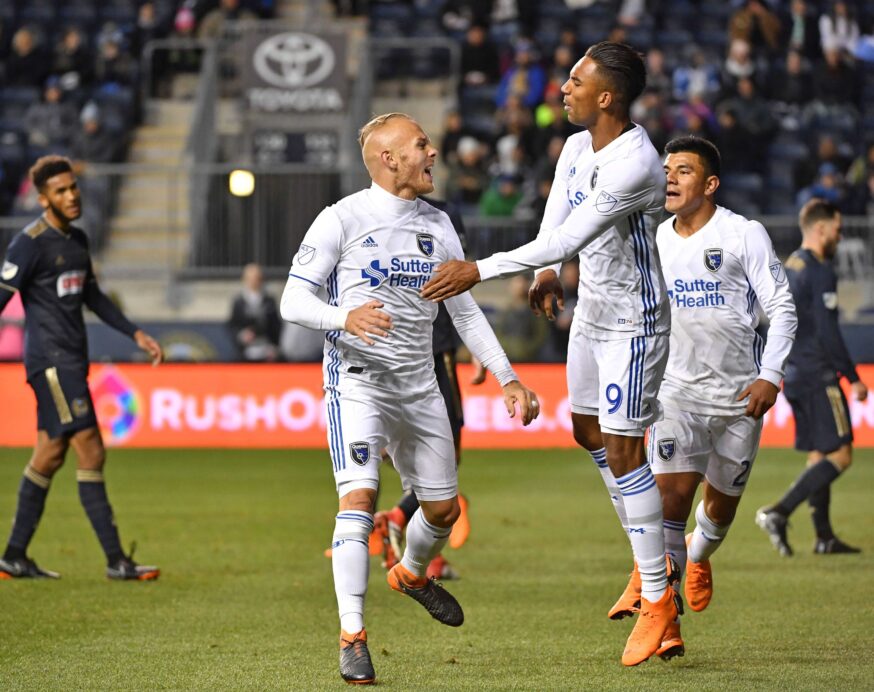 Any time you’re able to grab a point on the road, it should be listed as a win for your team.

The San Jose Earthquakes absorbed a lot of pressure in Saturday’s 1-1 road draw against the Philadelphia Union, but ultimately left Talen Energy Stadium disappointed with the end product.

Mikael Stahre’s men may have ended a two-match losing run in the process, but they were unable to hold onto a first-half lead and could’ve been dealt a much more different ending.

“We came here tonight for three points so of course from that perspective I am disappointed,” Stahre said. “But still in the first-half Philadelphia put us under a lot of pressure and offensively we were unable to score on our chances.”

The Quakes took a 1-0 lead in the 37th minute as designated player Magnus Eriksson finished Danny Hoesen’s cutback assist past Andre Blake into the top-right corner. It was the Swede’s first MLS goal, and his third point of the season after grabbing an assist in each of San Jose’s last two matches.

“It was a great ball by Danny, scored with my right foot which I haven’t done too often but it was a nice goal and a good feeling,” Eriksson said. “Unfortunately we allowed Philadelphia back into it in the second-half, but with the amount of pressure we absorbed we should be happy that we can take a point back to California.”

Eriksson has been a lively attacker for the Quakes this season, since his move from Djurgardens of the Swedish Allsvenskan. The former Sweden youth international can see the differences that Major League Soccer has after playing in Europe for most of his career.

“Through these first four matches, the biggest difference I’ve seen is a lot of back and forth action where in Europe it was more possession-based,” Eriksson said. “I think we can be one of those teams that can keep possession, hold the ball and improve on what we already have.”

San Jose missed a golden chance to score before Eriksson did in the 30th-minute as a counter attack allowed Vako Qazaushvili in on a breakaway. The Georgian aimed for the bottom-left corner but Blake saved the effort. Outside of that, San Jose was put on the back foot for the remainder of the match. Frustration later boiled over after the final whistle as San Jose centerback Harold Cummings saw a straight red card for striking Union defender Auston Trusty in his groin.

“We knew Philadelphia would come after us in the second-half so we changed our shape and went to a back five,” Stahre said. “In general I think it went well and we were able to hang onto a point despite Philadelphia threatening late.”

Since an opening day 3-2 win against Minnesota United, San Jose had lost 3-2 to Sporting Kansas City and 2-1 to New York City FC. A 1-1 draw on the road isn’t the end of the world, especially after coughing up an early lead to New York back on March 31.

Andrew Tarbell was huge for the Quakes, making seven saves in Saturday’s draw. He kept Fafa Picault out on a pair of occasions, while also repelling Borek Dockal’s close-range chance out in the first-half. Eventually though a dazzling deke by Picault, set up Alejandro Bedoya who headed Philadelphia level in the 64th minute.

“We wish we played a little bit better, we got away from our game plan which was to build up from the back but overall we can’t be that mad with one point,” Tarbell said. “Our goal we scored came from playing out of the back and we hope to do more of that in the coming matches.”

Tarbell has had to wait for his chance to start between the posts for San Jose after only 13 appearances in the last two seasons. With David Bingham’s move to the LA Galaxy, the 24-year-old has taken a hold of the starting job and received praise from his head coach for his strong performance on Saturday.

“For me Tarbell was the man of the match,”Stahre said. “As a group I feel we need to be more compact in the back but also be able to create good chances. We will now look back at this game and analyze it in order to get ready for Houston.”

San Jose (1-1-2) sit in 10th place in the West and return to Avaya Stadium for a clash with the Houston Dynamo on April 14. Unlike their troubles on the road this season, the Quakes feel a lot better returning to a place where they have already won once already.

“At home we feel a lot more comfortable and we’re happy to return there to face Houston,” Eriksson said. “Even in our last home match against New York we were able to create a lot of chances so that’s good. We now need to transform our chances into goals.”