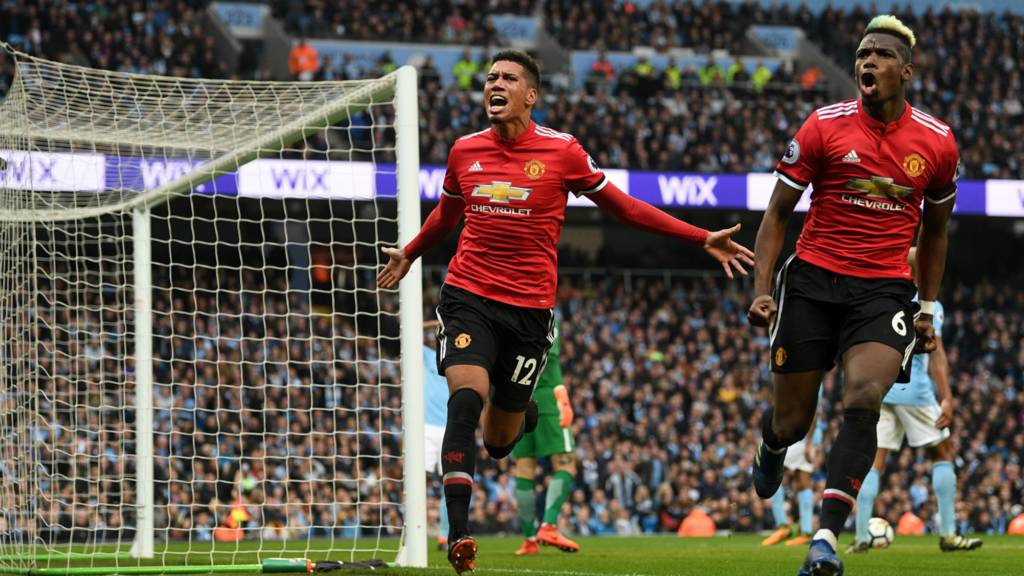 For one half of Saturday’s Manchester Derby at the Etihad Stadium, Manchester City looked like they would claim their third title out of the past seven seasons. Rivals Manchester United had other ideas and rolled their way back for a 3-2 come-from-behind win to spoil the party.

Vincent Kompany and Ilkay Gundogan each netted goals in the opening 45 minutes to give City a 2-0 halftime lead. After being in the media this week, Paul Pogba answered his critics with a pair of goals to draw United level. Pogba’s first strike came from a right-footed effort after 53 minutes before heading Alexis Sanchez’s cross in two minutes later. Chris Smalling played the hero heading in after 69 minutes to grab the win for the Red Devils. David de Gea made a few late saves to preserve the win, which now will keep City from clinching the title for at least another week.

Elsewhere, Bayern Munich clinched their sixth consecutive Bundesliga title while Borussia Monchengladbach hosted Hertha Berlin. Barcelona welcomed Leganes to the Camp Nou in final La Liga match of the day. PSG traveled to St. Etienne on Friday, while Monaco hosted Nantes on Saturday. AS Roma welcomed Fiorentina to the Olimpico in the Serie A showdown of the weekend.

Burnley continued their press for a European qualification spot with a come from behind 2-1 road win at Watford. Sam Vokes drew the Clarets level in the 70th-minute after Roberto Pereyra had given Watford a lead earlier in the second-half. Jack Cork headed in Burnley’s winner after 73 minutes as the 28-year-old scored his second league goal of the season. Nick Pope made four saves in the win for Burnley, their fourth consecutive victory in league play. Watford have now lost three of their last four matches, which sees them drop into 12th place.

Barcelona cruised their way to another three points at home with a 3-1 success against Leganes on Saturday. Lionel Messi carried the Catalan side with a hat trick, giving him 35 goals in all competitions this season. Messi’s first on the day came from a superbly placed left-footed free kick after 27 minutes. The Argentine doubled Barcelona’s first-half advantage in the 32nd-minute as he finished Philippe Coutinho’s through ball assist. Nabil El Zhar pulled one back for Leganes after 68 minutes but Messi had the final say in the match. Messi capped his hat trick with a close-range finish in the 87th-minute to cap the final score at 3-1. Leganes drop to 14th in the league standings while Barcelona are 12 points clear at the top of the table.

Bayern Munich clinched their sixth consecutive Bundesliga title on Saturday, rolling past Augsburg 4-1 away from home. The visitors fought their way back from an early deficit, after Niklas Sule’s own-goal in the 18th-minute had Augsburg up 1-0. Corentin Tolisso headed Bayern level after 32 minutes ahead of James Rodriguez’s left-footed finish later in the opening half. Arjen Robben’s seventh goal in all competitions extended Bayern’s lead to 3-1 in the 62nd-minute from a fast break. Sandro Wagner headed in Bayern’s final goal of the match, stamping the final score at 4-1. Augsburg only had one shot on goal in the loss, their second out of the last three.

Borussia Monchengladbach had found it tough to get consistent goal scorers this season with zero in double digits. Thorgan Hazard inched closer to ending that stat with a pair of goals off the bench in Gladbach’s 2-1 home win over Hertha Berlin. Salomon Kalou’s close-range finish after 40 minutes gave Berlin a halftime 1-0 lead. Hazard’s left-footed finish in the 75th-minute drew Gladbach level before the Belgian claimed all three points for the hosts. Hazard stepped up and slotted home his ninth league goal of the season from the penalty spot to stamp the win. Gladbach are in eighth place after the victory, while Berlin are in 10th.

Fiorentina continued their impressive run of results with a 2-0 road victory at Roma on Saturday. The visitors used a pair of first-half goals to claim the win at the Olimpico. Marco Benassi’s right-footed finish after seven minutes opened the scoring for Fiorentina. Giovanni Simeone hit double digits in goals this season, extending the visitors lead in the 34th-minute. Marco Sportiello made eight saves to preserve the win and the clean sheet for Fiorentina who jumped into seventh place. Roma remain in third place but could drop pending other results on Sunday.

PSG earned a point in the dying seconds of Friday’s date with St. Etienne, tying 1-1 on the road. Mathieu Debuchy’s own goal after 92 minutes gave Unai Emery’s side a share of the spoils. Remy Cabella had St. Etienne in front after 17 minutes as the forward finished Jonathan Bamba’s assist. Cabella missed the chance to double the hosts lead after 31 minutes, being saved by Alphonse Areola from the penalty spot. Presnel Kimpembe saw a second yellow card for the visitors in the 41st-minute, reducing them to 10-men. However, PSG continued to press and they got their reward late as Debuchy turned into his own goal. PSG remains 14 points clear at the top of the table, while St. Etienne are in ninth.

Monaco extended their current unbeaten run to 16 matches with a 2-1 home win over Nantes. Rony Lopes’ left-footed finish ahead of halftime proved to be the deciding goal after Monaco fought back. Adrien Thomasson’s long-range strike had Nantes in front after 31 minutes before the hosts drew level. Radamel Falcao’s 18th league goal of the season leveled the score at 1-1, before the Colombian assisted on Lopes’ winner. Nantes remain eighth place after the defeat, while Monaco are in second.