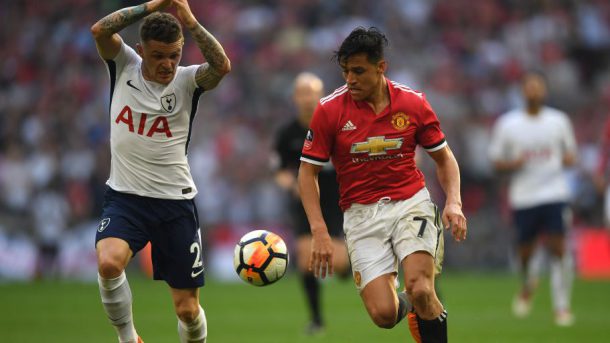 Both Manchester United and Tottenham were two sides expected to do great things this season but have underachieved big time. However, one of those two clubs will be playing for England’s biggest trophy this May. Manchester United will make their 20th appearance in the F.A. Cup final after a 2-1 semifinal win over Tottenham on Saturday. Andre Herrera played the hero scoring the winner in the 62nd minute for the Red Devils. The Spaniard’s right-footed finish beat Michel Vorm to the center of the goal. Alexis Sanchez’s header in the 24th minute drew the teams level after Dele Alli’s opener came in the 11th minute for Tottenham. Despite having the early lead, Tottenham could not find an equalizer ultimately being eliminated in their home stadium.

Elsewhere in Europe, Barcelona faced Sevilla in the Copa Del Rey final. Liverpool traveled to West Bromwich Albion in EPL play, while Getafe visited Eibar in Spain. AS Roma prepared for their Champions League tie midweek as they faced Spal. Borussia Dortmund hosted Bayer Leverkusen in the Bundesliga match of the day. The points were shared between Nantes and Rennes in Ligue 1 play.

Liverpool thought Saturday’s showdown with West Brom would be a cakewalk, but the hosts had the last laugh fighting back for a 2-2 draw. Danny Ings’ rebound finish in the fourth minute opened scoring for Liverpool at the Hawthorns. Mohamed Salah tied the Premier League record with his 31st league goal of the season, chipping Ben Foster in the 72nd minute. Jake Livermore scored from close-range to pull the Baggies to within one in the 79th minute, before Salomon Rondon headed in the hosts equalizer in the 88th minute. Lorus Karius made four saves in the draw, while Foster made one. West Brom are eight points from safety with three matches remaining, while Liverpool remains in third.

Chelsea faces Southampton on Sunday in the second semifinal.

Getafe extended their current winning run to three matches with a 1-0 road triumph against Eibar. Mathias Olivera headed in the lone goal in the match, beating Marko Dmitrovic to the bottom-right corner in the 23rd minute. It was the Uruguayan’s first goal of the season, in only his fourth appearance of the campaign. Eibar only recorded two shots on goal in the loss, which is their third out of their last five fixtures. Getafe are in eighth place with the victory, while Eibar are in 12th.

Barcelona became the first team since 1933 to win the Copa Del Rey four consecutive seasons, routing Sevilla 5-0 on Saturday. Luis Suarez netted a brace in the first half, while Lionel Messi also scored. Suarez’s close-range finish in the 14th minute opened scoring for Barcelona. Messi doubled the lead in the 31st minute, finishing Andres Iniesta’s assist into the high center of the goal. Suarez extended the lead to 3-0 as he slotted home Messi’s assist in the 40th minute. Iniesta added a fourth for Barcelona in the 52nd minute, before Philippe Coutinho converted a penalty kick in the 69th. Sevilla was held to four shots on goal in the disappointing loss.

Borussia Dortmund flexed their muscles on Saturday, bouncing back for a 4-0 home beatdown of Bayer Leverkusen on Saturday. Marco Reus added a brace for Dortmund while two other players got on the scoresheet. Jadon Sancho opened things in the 13th minute as he slotted in Christian Pulisic’s assist. Reus’ penalty kick in the 37th minute was saved by Bernd Leno to keep the score at 1-0 going into halftime. Reus made up for his earlier miss but slotting in Mario Gotze’s assist in from a tough angle in the 55th minute. Maximilian Philipp extended the lead to 3-0 in the 63rd minute, before Reus headed in his second of the match in the 79th minute. Leverkusen had two shots on goal but eventually lost for the second time this week.

Borussia Monchengladbach cruised their way to three points at home on Friday, defeating Wolfsburg 3-0 at Borussia Park. A trio of goalscorers got on the scoresheet for Gladbach, who tallied all of their goals in the opening half. Lars Stindl’s right-footed shot in the eighth minute kicked off the action for Gladbach. Raffael doubled Gladbach’s advantage in the 35th-minute, scoring from a rebound inside of the box. The Brazilian now has nine goals this season in all competitions. Christoph Kramer’s wonderful free kick in the 44th minute capped off a perfect 45 minutes for the hosts as they ran off as winners. Wolfsburg was held to two shots on goal, with American defender John Brooks being subbed off in the 29th minute in his return to the starting lineup. Wolfsburg are in 14th but could drop even lower by the conclusion of the weekend. Gladbach are in eighth place and four points back from Europa League qualification spots.

AS Roma prepared for their midweek Champions League date with Liverpool, by easing past Spal 3-0 at the Paolo Mazza. Francesco Vicari’s own goal in the 33rd minute gave Roma a 1-0 first-half lead, which they would take into halftime. Radja Nainggolan doubled the visitors lead in the 52nd minute, scoring from a set piece situation for his third goal of the season. Partik Schick headed in from close-range in the 59th minute to cap the final score at 3-0 for Roma. Spal are a point clear of the bottom three, with four matches remaining. Roma lead rivals Lazio by three points and are still in third place.

The points were shared on Friday between a top-half sides Nantes and Rennes in a 1-1 draw. An own goal by Nantes defender Nicolas Pallois allowed Rennes a share of the points, after the Frenchman turned into his own goal in the 81st minute. Adrien Thomasson rifled home Nantes’ opener in the 42nd-minute, but it proved to be not enough for all three points. Emiliano Sala was sent off in the 46th minute for picking up a second yellow card. Tomas Koubek was strong for Rennes, making five saves in the draw. Claudio Ranieri’s men are in eighth place on 46 points, while Rennes are in fifth on 48.