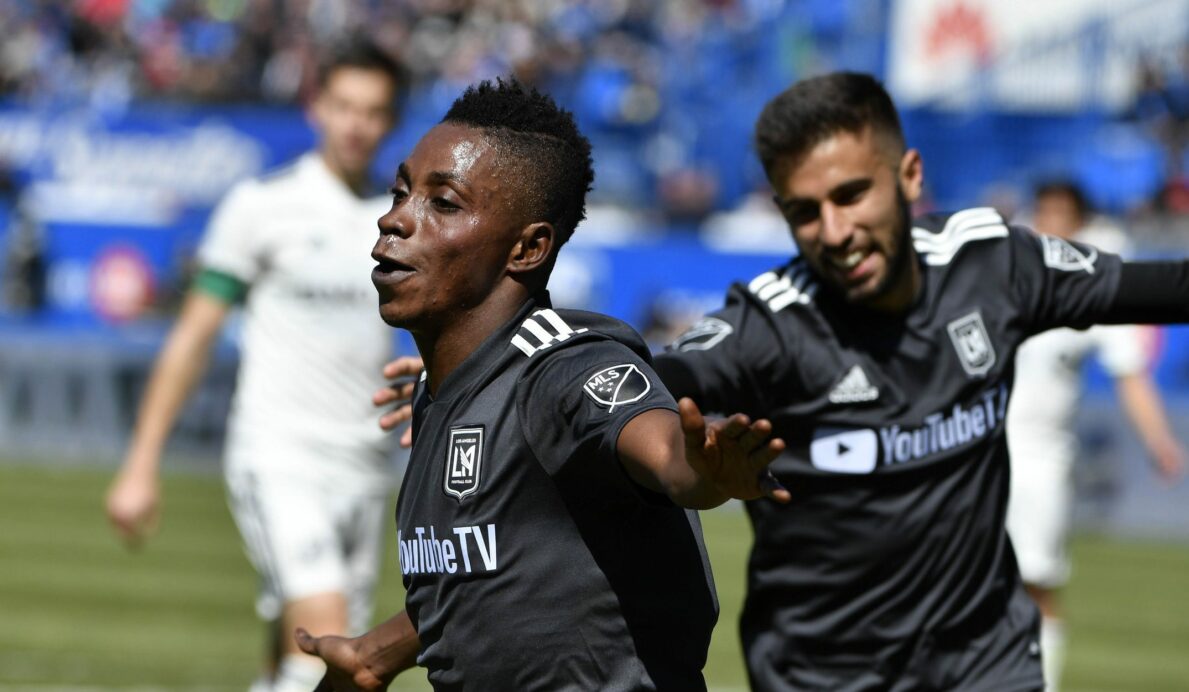 It’s a busy Saturday across the MLS landscape with a star-studded evening matchup serving as a worthy main event.

Atlanta United’s clash with the LA Galaxy will conclude the day, but there has been plenty of action all over the league in the build-up to the heavyweight clash. The day starts with LAFC’s goal-fest against the Montreal Impact, and the Chicago Fire’s surprising win at Red Bull Arena.

The SBI team will be providing in-game updates and post-game breakdowns of  game, so follow along throughout what will certainly be a busy Saturday of MLS action. Also, feel free to share your thoughts and opinions on today’s action in the comments section below:

Atlanta United may have been the visiting team in Saturday’s marquee matchup against the LA Galaxy, but they looked like the home team, taking it too the Galaxy from the beginning on the way to a convincing 2-0 victory at StubHub Center.

Atlanta United grabbed a 21st-minute lead after Josef Martinez hustled to a loose ball in front of goal. A Julian Gressel shot rattled off the crossbar before bouncing into Martinez’s path, and he made no mistake.

The LA Galaxy eventually settled down and found a foothold, but never quite managed to seriously test Brad Guzan, who made just one save on the night.

Miguel Almiron sealed the victory for Atlanta in second-half stoppage time after converting a penalty drawn by Romario Williams. to help the Five Stripes post their fifth win in six matches.

Man of the Match: Miguel Almiron ran wild on the Galaxy midfield, creating a ton of chances and using his speed to be a constant threat on the counter.

Moment of the Match: When Julian Gressel rocketed a shot off the crossbar, it looked like it might be one of those nights for Atlanta, but the rebound found Martinez, who converted to give Atlanta a deserved lead.

Match to Forget: Galaxy defender Daniel Steres spent much of the match chasing shadows, and his lapse on Atlanta’s first goal opened the door for Martinez to finish. Also committed a penalty foul, though Martinez missed the penalty kick.

The Colorado Rapids were hit with a first-half red card that made grabbing points at Rio Tinto Stadium all but impossible. For 80 minutes it looked like the Rapids might hold out for a road draw, but things fell apart badly in the final 10 minutes.

Three RSL goals in the final eight minutes led to a 3-0 blowout win for Mike Petke’s side. By the time Albert Rusnak converted a free kick finish in second-half stoppage time, the outcome of the match was decided.

The first half had no goals, but it did have plenty of drama. Tim Howard was sent off int he 20th minute for a handball outside of the box, leaving the Rapids with 10 men and with MacMath forced into action.

Man of the Match: Albert Rusnak provided a goal and an assist late in the match, providing valuable insurance in what somehow ended as a lopsided win.

Moment of the Match: After 82 minutes of beating their head against the wall, RSL finally broke through on Joao Plata’s penalty kick.

Match to Forget: Tim Howard’s early dismissal put the Rapids very much on the backfoot, and they never recovered even if they held on most of the way.

Following a drab first half, FC Dallas got on the board in the 64th minute on Mauro Diaz’s penalty kick. The spot kick came following a foul on Auston Trusty, giving the hosts a 1-0 lead midway through the second half.

Man of the Match: Jimmy Maurer stepped up at the right time for FC Dallas, providing a crucial double save to preserve the win.

Moment of the Match: The penalty call on Auston Trusty swung the game, as Mauro Diaz buried the spot kick and scored the eventual game-winning goal.

Match to Forget: The entire Union attack was far from good on Saturday, with C.J. Sapong earning Match to Forget honors after firing just one of his four shots on frame.

Saturday’s clash between the Crew and the Revolution had planety of goals, but no winner, as the two teams played to a 2-2 draw at MAPFRE Stadium.

The Crew got on the board early through an Andrew Farrell own goal, but the Revs were right back in it moments later with a finish of their own. Teal Bunbury provided the finish from a tight angle, leaving the score at one apiece in the 14th minute.

Just before halftime, both teams pushed and found a second goal. Gyasi Zardes appeared to give the Crew the lead heading into the break with a 43rd minute finish but a goal from Cristian Penilla in first half stoppage time level the scoreline going into the second half. That scoreline remained, as the two team settled for a split of the points.

Man of the Match: Cristian Penilla scored an important goal and shined in the middle of the field, leading the way in the win.

Moment of the Match: Just moments after the Crew took the lead, the Revs got back into it through Cristian Penilla’s goal, restoring momentum heading into the second half.

Match to Forget: One week after scoring his first professional goal, Andrew Farrell was unfortunate to be on the end of an own goal to open a frustrating tie.

Orlando City kept on rolling with yet another win.

Mueller turned provider on the second, feeding Sacha Kljestan in the 35th minute as Orlando City took a two-goal lead. That lead became three through Dom Dwyer, who scored on a Justin Meram assist midway through the second half.

The Quakes’ comeback began in the 78th minute through Florian Jungwirth, who added a second in the 90th to make matters interesting. However, the Quakes fell short as Orlando a fourth consecutive match.

Man of the Match: Chris Mueller shined once again, providing a goal and an assist in the win.

Moment of the Match: Dom Dwyer’s second-half goal proved the vital moment. It looked like it was just running up the score at the time, but the forward’s finish proved to be valuable insurance.

Match to Forget: Given the start up top, Chris Wondolowski had an uncharacteristically quiet game, mustering just one shot.

In need of a big road result, the Chicago Fire put together what may just be the team’s best performance of the young season.

The Fire lead after 30 minutes thanks to a goalazo struck by Aleksandar Katai. The Fire playmaker fired home a first time shot after a failed clearance from Aaron Long following a corner kick.

The Red Bulls wasted a number of good chances through the first half, outplaying the Fire but heading into halftime down 1-0.

The Fire extended their lead through Nemanja Nikolic from the penalty spot in the 69th minute. Luis Robles was called for a foul on Katai in the box.

The Red Bulls finally got their goal in the 81st minute when Bradley Wright-Phillips tapped home a loose ball in the box following a corner kick. It was his fifth of the season, bringing the score to 2-1. It was as close as the Red Bulls would get to a Fire team that picks up a much-needed win.
Man of the Match: Aleksandar Katai made the most out of the few opportunities afforded him, scoring the opening goal and drawing the game winning penalty.

Moment of the Match: Katai’s opening goal was a special strike and could be an early contender for Goal of the Week.

Match to Forget: Marc Rzatkoswki seemed a step off with the rest of the Red Bulls, taking an advanced position that left Tyler Adams on an island and the Red Bulls wide open for the counter.

Once again playing a second-string lineup with the Concacaf Champions League final looming, TFC took a beating on Saturday.

The reigning MLS Cup champions conceded a quick goal to the Dynamo. It took just three minutes for the hosts to jump into the lead on a goal from Mauro Manotas. Leonardo then provided the Dynamo’s second in the seventh minute against a stunned TFC team featuring few first-team regulars.

The Dynamo struck quickly yet again in the second half with Eric Alexander pushing the lead to 3-0. A goal from Mitchell Taintor brought TFC back within two, but hope was short-lived as Alberth Elis made it 4-1 on an assist from Romell Quioto. In the 77th, Quioto added a goal of his own, extending the Dynamo lead in what ended as a lopsided Dynamo win.

Man of the Match: Romell Quioto finished with a goal and two assists in a dominant performance.

Moment of the Match: While Manotas’ early goal was a major statement, Leonardo’s seventh-minute finish removed all doubt before the match even got going.

LAFC completed an unbelievable comeback to secure yet another road win in a 5-3 victory over the Impact.

The Impact jumped on LAFC early, scoring a goal through star midfielder Ignacio Piatti in the ninth minute. The Argentinian playmaker pounced on a rebound, firing home from the center of the box following a Tyler Miller punch. Seven minutes later, it was Piatti again, firing from the penalty spot to make it 2-0.

The match turned on its head soon after as Laurent Ciman scored on his return to Montreal with a missile of a free kick. In the 31st minute, the Impact went down to 10 men as Victor Cabrera was sent off with a straight red. Before the halftime whistle, though, Piatti complete his hat-trick, giving the 10-man Impact a 3-1 lead heading into the break.

The second half began with immediate fireworks as LAFC jumped on the short-handed Impact. Benny Feilhaver scored a goal seven minutes into the second stanza before a Jukka Raitala own goal leveled the score at three apiece.

In the 84th minute, LAFC snatched the lead and the win, as Carlos Vela scored from the penalty spot to complete the comeback. Latif Blessing’s late goal was merely insurance as LAFC picked up a fourth win through the club’s six-game road trip.

Man of the Match: Carlos Vela was one of the main factors in LAFC’s second-half comeback. The Mexican international brought his team back in the second half after being down 3-1, assisted Benny Feilhaber’s goal and scored the penalty that gave his team their first lead of the game.
Moment of the Match: At the 83rd minute, Carlos Vela completed the LAFC comeback. After a penalty given up by Daniel Lovitz, Vela stepped up to the spot, shot towards the middle converted the penalty despite Evan Bush getting a hand on it.
Match to Forget: Victor Cabrera’s red card undid a strong effort from the Impact, including standout performances from Piatti and Evan Bush, who finished with 14 saves.