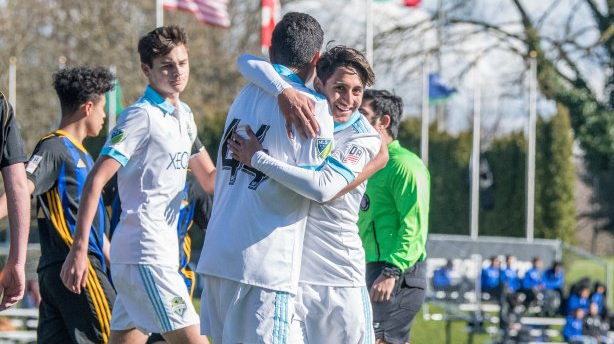 With their 2-1 defeat of the New York Red Bulls on Sunday, the Seattle Sounders youth academy took home the 2018 Generation adidas Cup Premier Division for the first time.

The Red Bulls went in front early with an eighth minute penalty kick buried by Scott Taylor, but that would be all the scoring they would find, even after Seattle went down a man in the 29th minute.

Seattle took all of five minutes to level the score through Marlon Vargas. He was able to tap in a Connor Drought cross with the Red Bull keeper off his line. The winner came in the 61st minute from substitute Alec Diaz, who slotted a shot inside the far post when he was alone on the keeper.

In other GA Cup action, Flamengo of Brazil won the Champions Division with a 1-0 win over fellow Brazilian side Atletico Paranaense with a 1-0 win in the final. Sporting Kansas City also took home the GA U-12 competition with a penalty shootout win over Los Angeles FC. They are the first MLS side to win that particular trophy.