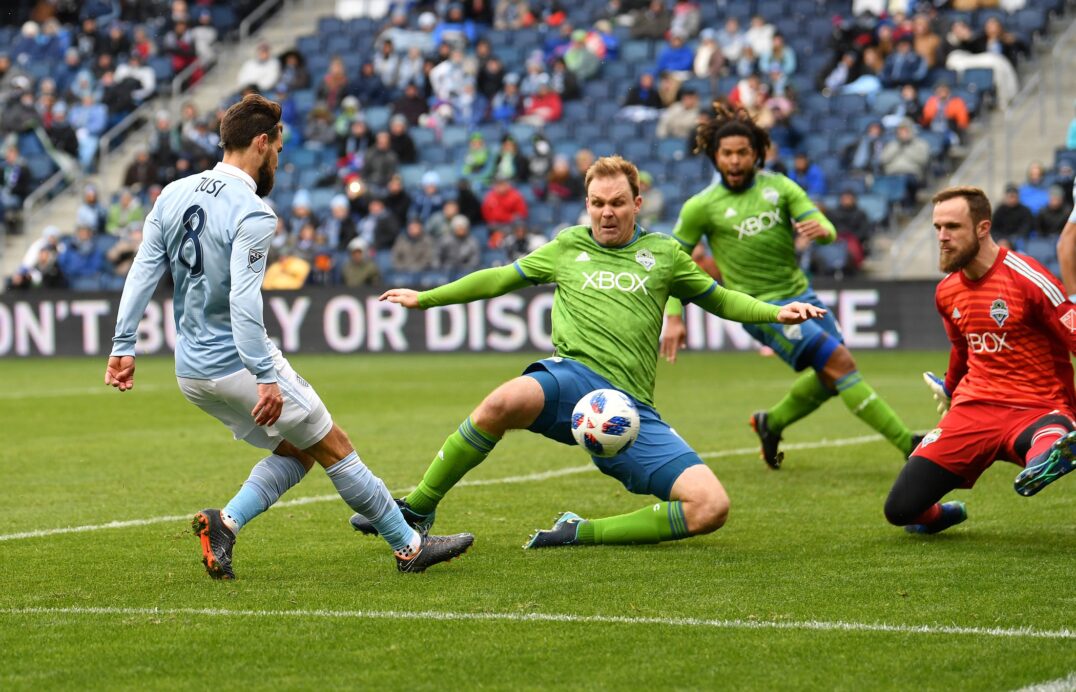 Draws are fickle things in soccer. Sometimes a team is happy to scrap out a point against a superior opponent on the road. In other instances, a team will feel they played well enough to earn a point and will leave the pitch disappointed.

Neither Sporting Kansas City nor the Seattle Sounders were exactly pleased with how Sunday’s 2-2 draw against each other turned out.

It’s hard to argue with him, too. The Sounders went in front in the 73rd minute as Christian Roldan rolled one in inside the far post. However, some weak defending less than five minutes later allowed Graham Zusi to waltz into the penalty area and tie the game without much trouble at all.

“You’ve got to credit (Graham) Zusi for making a play at the end there,” said Schmetzer. “I thought that we put enough into the game that we could have come out with the full three points.”

That isn’t to say there wasn’t any positive talk in the Seattle locker room after the game. It was, after all, their best result of the young season. Schmetzer hopes his team can use the disappointment of letting a late lead slip away can be used as motivation in the future.

“I think we left something out there,” he said. “Even so, for the guys that put in all of that effort and all of that work – it stings a little bit. But it gives them some good incentive for the next game.”

In the meantime, the players feel the sting of this result as well.

“It’s going to sting for a bit just because we were able to go up 2-1 on them late in the game and then gave one up,” said Alex Roldan, who was making the first start of his MLS career.

“That being said, it is a tough place to play so we’re happy with going home with a point. Hopefully this will be something that will get us going.”

Osvaldo Alonso, who was making his first appearance of the season when he came on as a substitute in the 68th minute, echoed that sentiment.

“It’s a good point but we had the result in hand and let it go,” he said. “We have to forget about it and focus on the next game against Minnesota. We have to learn from our mistake.”

On the other side of the touchline, Sporting Kansas City was understandably upset with how things turned out. They are on top of the Western Conference standings and just gave away two points against the team at the other end of the table. Head coach Peter Vermes was just as disappointed as his opponent with how his team played.

“I think that we gave up two very soft goals tonight,” he said in the post match press conference. “One was a lack of concentration. The other one was poor decisions all the way around. It’s good we fought back but I would also say that we weren’t at our best tonight, for whatever reason I don’t know. We’ll have to evaluate that. All in all, to get a point was good to get out of this game that way.”

He was pleased at his team’s fight to earn a draw, but he really thought the team should have won the game against a team that was yet to score a goal in MLS play this year and was without their two leading forwards.

“There’s no doubt the group has an attitude of being able to come back from being down,” Vermes said of his team. “They don’t get upset with being down and give up. They’re good in that regard and we’ve got to keep going. But we should have been better throughout the game not to be in that position.”