Struggling Fire looking to rediscover what made 2017 a success 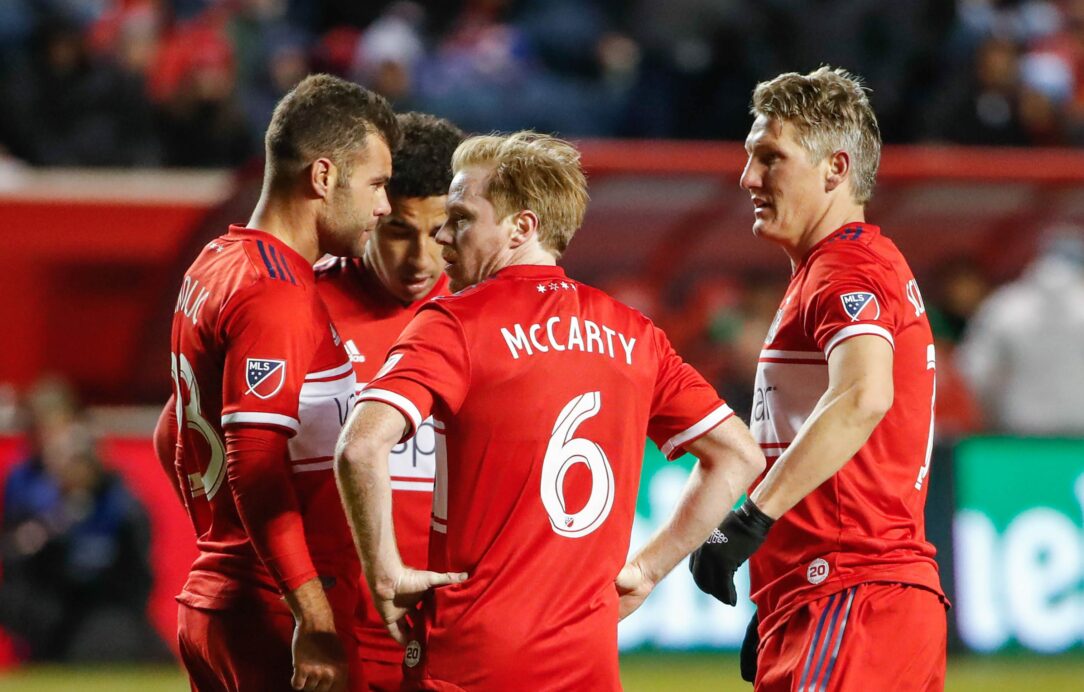 Dax McCarty revealed a bitter truth this past weekend. Following the Chicago Fire’s third loss in five matches, the veteran midfielder said the results revealed a simple fact: the Fire, at the moment, are “below average”.

It’s hard to argue with that statement. The Fire currently sit second to last in the Eastern Confernece, ahead of only the Toronto FC B team that has routinely been thrown out in between Concacaf Champions League clashes. Last season, the Fire were a playoff contender. This season, they’ve struggled mightily.

Head coach Veljko Paunovic admitted that he’s seen a drop-off from last year,  which has led to a poor start to the season. If a turnaround is to come begin this weekend, it will have to come on the road against a New York Red Bulls side that is very tough to beat a Red Bull Arena.

“It starts with playing good football. That’s what we are looking for,” Paunovic said. “We’re looking to reach the level we had last year and the style we played, but it’s going to take some time, especially because the not so good start we’ve had and the circumstances we’ve had.  It’s going to take some time, but we’re looking forward to building, or rebuilding, our style and getting back to the side of the game that we enjoy.

“I think we’re doing a good job. Overall, a good job. Guys are in a great mood but are also conscious and aware of the situation we are in.”

The Fire have had little to enjoy thus far this season. The defense has struggles, even with Bastian Schweinsteiger deployed in a deeper role. Through five games, the Fire have allowed nine goals, good for the second-worst goals against average in the conference.

In 2017, the Fire weren’t the league’s best defensive team, but they were solid. Throughout the run that produced a third-place finish and a playoff appearance, the Fire conceded 47 goals, leaving them tied for third in the East.

Additionally, the Fire haven’t quite held home serve like they did a year ago. Last season, the Fire lost twice at home all year. This year? Two losses in Bridgeview already.

Part of that is due to injury. While the absence of players like Michael de Leeuw, Djordje Mihailovic and Luis Solignac have been felt, so too have the injuries to Matt Polster and Jonathan Campbell, two players that remain key parts of the defense’s core.

The good news? Campbell is back in the fold, adding another strong centerback to the mix to a defense that could certainly use one.

This past weekend, though, the Fire made one simple mistake in Campbell’s return. The Fire lost, 1-0, to the LA Galaxy due to one critical error: losing Zlatan Ibrahimovic in the box. Sometimes, that’s all it takes, and that’s been an issue that’s plagued the Fire this season.

“As a team, we talk about these things,” Campbell said. “We try to discuss and eliminate the goals that we’re giving up. We’ve done a better job on that, but as a team collectively, we’ve been defending a little bit deeper. We’re trying to find that balance where we create chances and are also solid defensively. It’s what we’re going for.”

Paunovic says he sees this weekend’s match as “an opportunity”. Facing a fellow Eastern Conference contender, any points taken by the Fire would be helpful in getting back into the race. Aside from that, Paunovic sees that match as potential confidence boost for a team that can use a little bit of a jolt at the moment.

Adding to the clash is the team’s recent history against the Red Bulls. McCarty’s connection aside, Paunovic’s Fire have struggled against the Red Bulls, with last season’s playoff exit serving as the most memorable defeat. The Red Bulls’ style is a unique one, and it’s one that will require an alert and crisp performance if the Fire hope to get anything from this weekend.

It’s still too early to panic and it’s certainly not time to write off any team in MLS. However, the Fire are aware that changes need to be made and results need to improve if they hope to shed the label of “below average”.

“It’s time where words are worthless unless you put them in action,” he added, “and that’s what we’re looking forward to.”