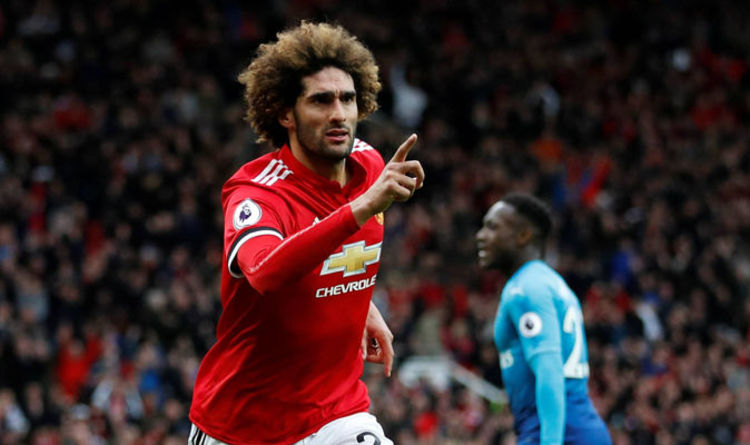 Manchester United’s hopes of finishing runners up in the English Premier League took a big boost after their 2-1 home win against Arsenal. Jose Mourinho’s men used a 91st minute winner from Marouane Fellaini to end the Gunners hopes of making the top-four this season. Paul Pogba put United ahead in the 16th minute, poking home a rebound after Alexis Sanchez’s header was blocked. It was the Frenchman’s sixth league goal of the season. Former Red Devils midfielder Henrikh Mkhitaryan leveled the score for Arsenal in the 51st minute, scoring from outside of the box to the bottom-left corner. The Armenian left David De Gea flatfooted and scored his third goal for the club since his move from Manchester in January. Fellaini played the hero as his flicked header beat David Ospina to the bottom-right corner to snatch the win for Manchester United. The win puts United five points clear of third-place Liverpool, while Arsenal remains in sixth.

Elsewhere in Europe, Barcelona faced off with Deportivo away from home while Atletico Madrid traveled to Alaves. Borussia Dortmund squared off with Werder Bremen away from home in Bundesliga action. PSG welcomed Guingamp to the Parc Des Princes in Ligue 1 play. Napoli’s title hopes in Serie A took a major hit following their road loss to Fiorentina.

Tottenham Hotspur hosts Watford on Monday in the final match of Round #36.

Barcelona clinched the 2017-18 La Liga title with a 4-2 road win at Deportivo on Sunday. Lionel Messi sparked the Catalan side with a hat trick in the win. Philippe Coutinho opened the scoring in the seventh minute before Messi doubled the lead in the 38th minute. Lucas Perez’s left-footed finish in the 40th minute pulled a goal back for Deportivo before halftime. Emre Colak leveled the score at 2-2 in the 64th minute before Messi carried Barcelona to the win. His second of the match came in the 82nd minute from a close-range finish before capping his hat trick in the 85th minute. Messi now has 42 goals in all competitions this season.

Atletico Madrid had to dig deep for three points on Sunday, using a late penalty kick to defeat Alaves 1-0 away from home. Kevin Gameiro came off the bench for Diego Simeone’s men are slotted home his 11th goal in all competitions to claim the win for Atletico. Alaves’ Mubarak Wakaso was whistled for handball which allowed the visitors the PK. The hosts were kept out three times by keeper Axel Werner, who preserved the clean sheet. Atletico rested several starters in preparation for their Europa League semifinal second leg this Thursday against Arsenal. Jan Oblak and Antoine Griezmann were two players who were rested in today’s win.

Malaga travels to Real Betis on Monday in the final match of Round #35.

FSV Mainz rolled their way to a vital three points in their race for survival, downing RB Leipzig 3-0 at home. Pablo De Blasis’ penalty kick goal in the 29th minute gave Mainz an early advantage in front of their home fans. Alexandru Maxim doubled the lead in the 85th minute before Bote Baku sealed the win with a right-footed finish in the 90th minute. Frustration boiled over for Leipzig in stoppage time as Naby Keita saw a second yellow card and was sent off. The victory bumps Mainz into 14th place and out of trouble for now, while Leipzig are in sixth.

Napoli’s title hopes took a major hit on Sunday after a 3-0 road loss at Fiorentina. Giovanni Simeone led Fiorentina with a hat trick while Napoli played most of the match with 10 men. Kalidou Koulibaly was sent off in the sixth minute which put Napoli at a disadvantage already. Simeone gave the hosts a 1-0 lead in the 34th minute. Simeone doubled their lead in the  62nd minute from a close range finish, before finishing his hat trick in the 93rd minute. The hosts moved up to ninth place while Napoli remains four points back of leaders Juventus.

PSG had to fight their way back to grab a point at home in a 2-2 draw with Guingamp. A second-half brace from Edinson Cavani saved Unai Emery’s side from a disappointing defeat at the Parc des Princes. Ludovic Blas gave the visitors a 1-0 halftime lead, scoring from long-range in stoppage time. Jimmy Briand doubled the visitors advantage in the 68th minute, before Cavani saved the day for PSG. The Uruguayan pulled one back in the 75th minute from the penalty spot after Briand brought down Giovani Lo Celso inside of the box. In the 82nd minute, Cavani headed Thomas Meunier’s assist in to cap the final score at 2-2. Guingamp drops to 11th place while PSG sit on 91 points this season with three matches remaining in league play.