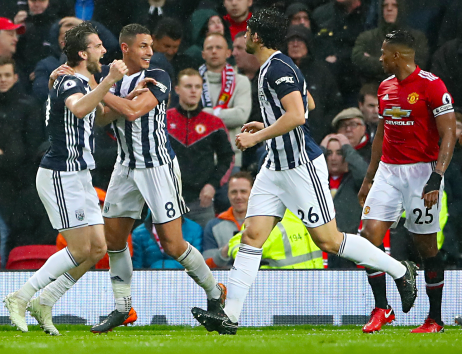 Manchester United have gone for the highest high to the lowest low in a matter of one week. A week after coming back against rivals Manchester City for a 3-2 derby win, the Red Devils were upset 1-0 by West Bromwich Albion on Sunday which clinched City the 2017-18 league title. The lone goal came from a West Brom corner as Jay Rodriguez headed in from close-range for the winner. It was the forward’s 10th goal in all competitions for the Baggies, giving West Brom their first road win at United since May 2015. Former Manchester United keeper Ben Foster made four saves in the clean sheet, which moves his side nine points from safety in the league table. United drop their sixth league match of the season, sitting only a point clear of Liverpool for second place. The league title for Manchester City is their third since 2012, and their fifth in the club’s history.

Elsewhere in Europe, Schalke handed Borussia Dortmund a derby defeat at Veltins Arena. PSG welcomed Monaco to the Parc Des Princes in the Ligue 1 clash of the day, while AC Milan welcomed Napoli to town in Serie A play. Atletico Madrid rolled to three points at home, while Real Madrid traveled to Malaga.

Newcastle United came from behind to claim their fourth consecutive win, defeating Arsenal 2-1 at St. James Park. Ayoze Perez leveled the score at 1-1 in the 29th minute, after Alexandre Lacazette opened for Arsenal in the 14th minute. Matt Ritchie played the hero for Newcastle, slotting home the winner with his right foot in the 68th minute. Perez deserved recognition as well for Rafa Benitez’s side, grabbing an assist on the Scotsman’s winner. Arsenal was held to three shots on goal in the loss, which was their first since March 4th. Newcastle are in 10th following the win, while Arsenal are in sixth.

West Ham United hosts Stoke City on Monday in the final match of Round 34.

Atletico Madrid cruised to another home win as they rolled past Levante 3-0 at the Wanda Metropolitano. Angel Correa’s opener came in the 33rd minute for Atletico, as the Argentine finished Vitolo’s assist into the bottom right corner. Antoine Griezmann doubled the hosts lead in the 48th minute as he rifled home his 26th goal of the season in all competitions. Fernando Torres added an insurance goal in the 77th minute for Atletico as he slotted Correa’s assist into the center of the goal. Levante only had three shots on goal, losing their first match since March 1st. Atletico are 11 points back of league leaders Barcelona in the table, while Levante remain in 17th.

Schalke used a pair of second-half goals to edge rivals Borussia Dortmund 2-0 in Sunday’s installment of the Rivierderby. Following a scoreless first-half at the Veltins-Arena, Ukraine international Yevhen Konoplyanka broke the deadlock in the 50th minute. The midfielder finished Daniel Caligiuri’s assist into the bottom-left corner for his third league goal of the season. Naldo slammed the door shut on Dortmund’s hopes for a comeback as his masterful right-footed free kick found the bottom-left corner. Ralf Fahrmann made five saves in the clean sheet, for his fifth out of his last six appearances. Dortmund dropped into fourth place following the disappointing defeat.

FSV Mainz hosts SC Freiburg on Monday in final match of Round 30.

The points were shared in the clash between two of Italy’s historic clubs as AC Milan tied Napoli in a scoreless draw. Napoli had the better of the chances, with the majority of them coming in the second-half. Arkadiusz Milik and Lorenzo Insigne each were kept out by Gianluigi Donnarumma, who made four saves in the clean sheet. Hakan Calhanoglu had Milan’s best chance offensively, but Pepe Reina was comfortable making two saves for his clean sheet. Napoli remains six points back of league leaders Juventus, and cannot afford any more slip-ups in their race for a possible title. Milan are in sixth place, seven points back of rivals Inter who are in fifth.

Paris Saint-Germain clinched the 2017-18 Ligue 1 in prime fashion on Sunday rolling past defending champs Monaco 7-1. Giovani Lo Celso and Angel Di Maria each netted braces in the lopsided win for PSG. Lo Celso’s left-footed finish in the 14th minute opened the scoring for PSG who led 4-1 at halftime. Edison Cavani headed in PSG’s second in the 17th minute before Di Maria extended the lead from long-range in the 20th minute. Lo Celso’s header in the 27th minute made it 4-0 for the hosts. Rony Lopes’ close range finish pulled one back for Monaco in the 38th minute. Di Maria added his second goal of the afternoon in the 58th minute to give the Argentine 12 goals in all competitions this season. An own goal by Monaco striker Radamel Falcao extended PSG’s lead to 6-1 in the 76th minute, before Julian Draxler capped the final score in the 86th minute. Monaco remain second place, suffering their first league loss since Nov. 29th.

Marseille used a pair of goals in the final 15 minutes to come back against Troyes for a 3-2 road win. Clinton N’Jie canceled out Samuel Grandsir’s opener as the sides were level 1-1 going into halftime. Benjamin Nivet regained the lead for Troyes in the 48th minute as he finished from a rebound inside of the box. Kostas Mitroglou leveled the score a second time for Marseille in the 75th minute as he slid Dimitri Payet’s assist in from a fast break. Florian Thauvin played the hero again for Marseille as the Frenchman netted the winner in the 85th minute to claim all three points. Thauvin has been a huge reason for Marseille’s success this season, and now has 20 goals in all competitions. Troyes remain a point from safety, sitting in 19th place and will feel they deserved more from their performance. Marseille are in fourth place, sitting behind Lyon on goal difference.

Brendan Rodgers’ side got the better of their Glasgow rivals once again on Sunday as Celtic rolled past Rangers 4-0 in a Scottish Cup semifinal at Hampden Park. Tom Rogic opened the scoring for Celtic in the 22nd minute as the Australian curled a right-footed effort past Wes Foderingham. Callum McGregor added to the first-half lead as he like Rogic, beat the Rangers keeper to the bottom-right corner. Moussa Dembele extended Celtic’s lead to 3-0 in the 52nd minute as he chipped home from the penalty spot, after Rangers were reduced to 10-men. Olivier Ntcham added an insurance penalty kick goal in the 78th minute after Patrick Roberts was bundled over by Jason Holt. At the final whistle, Celtic knew they have a date with Motherwell in the Scottish Cup final on May 19th, seeking another domestic treble.