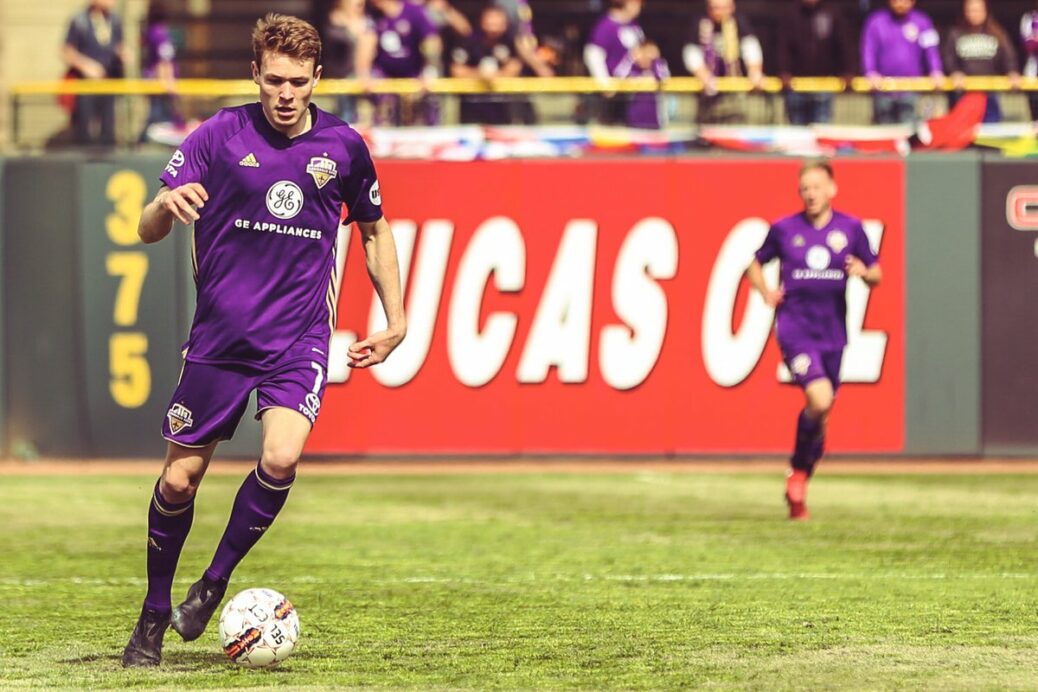 Week 3 of the 2018 USL season is in the books, and some big victories peppered some surprising results on the weekend.

First up, New York Red Bulls II set the tone for the weekend, crushing the Charleston Battery 5-2, spreading the scoring around to 4 players and kickstarting an offense that his sputtered through their opening two matches.

Lousiville City FC made a strong statement of intent, stopping the red hot Rowdies cold in a hard fought home victory. The Rowdies looked like strong contenders for the eastern conference crown in 2018, but LCFC reminded them who the 2017 champions were.

Let’s take a look at the rest of the action from Week 3:

A tame first half gave way to a deluge for NYRBII against the Battery. Goals from Brian White, Ben Mines, Andrew Tinari, and a brace from Amando Moreno kept the Battery from clawing their way back into the match.

A double from Tah Anunga kept things respectable for the Battery, but the game was never as close as the score line.

A sixth minute penalty kick was the difference for NSC to earn their first win over Steel FC. The home side did all the could, winning the possession battle and creating chances, despite being a man down for nearly the entire match.

However, a dubious penalty call on Breandon Aubrey, that was judged to be a DOGSO violation, kept the visitors in front, and they absorbed pressure well to see out the win.

The Monarchs look to have picked up right where they left off last season, and the USL western conference should take notice.

After a come from behind victory in their first match, the Monarchs wasted no time dispatching the Timbers 2, jumping out to a three-goal lead in the first 32 minutes of the match.

A third minute goal from Nick Besler, and a brace from Kalen Ryden, sent the Timbers packing early. Newly acquired Justin Portillo is proving to be a big addition, notching two assists in the first half.

The Timbers pulled two goals back from Jeremy Ebobisse, and Victor Arboleda, but Sebastian Velasquez added to the Monarchs spoils to ward off any thoughts of a true comeback.

LCFC put an end to the Rowdies win streak to start the season, dropping a hard fought 1-0 result on the visitors.

LCFC had the bulk of the chances, but Cody Mizell stood tall in goal for the Rowdies, fending off big chances in the 15th, and 39th minutes.

LCFC broke through in the second half when Oscar Jiminez slipped past the backline and finished low to the far post in the 69th minute. The goal came when the Rowdies looked to be finding the match, and gave LCFC a boost.

Despite creating a number of chances in the final twenty minutes of play, the Rowdies came up empty, losing and being shut out for the first time this season.

OCSC were already well in control of their road match over the Roughnecks by the time they were reduced to ten men, scoring twice in the opening twenty minutes through Thomas Enevoldsen and Richard Chaplow.

A rough tackle from Michael Binns saw the defender dismissed in the 27th minute, and OCSC scored on the resulting free kick in the 29th minute from Thomas Enevoldsen again.

The Roughnecks would be reduced to nine men in the second half when Riggs Lennon’s frustration got the better of him, with an infraction off the ball. Enevoldsen would complete his hat trick in the 77th minute, then added an assist in the 81st minute on Mechael Seaton’s goal.

The Kickers got their first win of the season over NCFC, coming from one goal down and scoring two goals late.

Daniel Rios opened the scoring just before halftime for the visitors, tapping in a Steven Miller cross and seemingly putting the Kickers on the path to their third straight defeat.

The Kickers responded well in the second half, creating a number of chances and building momentum. Fortune shined favorably on the Kickers as they earned a penalty kick in the 75th minute when Ben Shriver was taken down in the box. Yudai Imura found the back of the net from the spot for the equalizer in the 77th minute.

Shriver turned provider yet again in the 83rd minute on a give and go with Raul Gonzalez. Gonzalez finished the chance with a nice back-heel sending the Kickers to their first win of 2018.

It only took a 5th minute goal from Kyle Greig for STLFC to get their first win of 2018, holding off the Switchbacks through stout goalkeeping and defending.

STLFC goalkeeper Jake Fenlason came up big on a number of chances for the Switchbacks, and the visitors had no answers to unlock the STLFC defense.

A wild match between Los Dos and SAFC betrayed the scoreless draw of the scoreline.

SAFC had a chance to take the lead from the penalty spot when Los Dos goalkeeper, Wade Hamilton, was whistled for taking down Ever Guzman. Hamilton stood tall on the penalty, saving the shot and keeping the game scoreless.

Los Dos nearly opened the scoring in the second half through Miguel Aguilar, but his shot hit the crossbar.

SAFC was reduced to ten men for the final thirteen minutes when Mikey Lopez was shown a second yellow card for running into Hamilton.

Despite the man advantage and  Los Dos continuing to press for a winner, the sides split the points.

Atlanta 2 looked like they had snatched the points on the road for a second road win before a late equalizer dashed their hopes.

Lee Jung-Soo gifted the visitors an own goal in the 28th minute that was cancelled out by a Jorge Herrera strike in the 37th minute.

The visitors pushed the Independence through out the match, but Andrew Dykstra was up to the task, keeping the game even until the final ten minutes.

Lagos Kunga seemed to have scored the winner for Atlanta 2 in the 82nd minute, scoring from a narrow angle at the near post.

Jorge Herrera leveled the match again three minutes later to keep the Independence undefeated through three matches. Atlanta 2 showed well on the road against a strong team, and the questions about their contributions to the 2018 season are being answered early.

Despite a crowd of 17,535 fans for the first home game in Indy Eleven’s USL debut season, FCC rained on their parade.

Emery Welshman’s 26th minute headed goal was the difference as FCC won their second straight 1-0 road match, something the team struggled with in 2017.

The Eleven had a chance to knot the game up from the penalty spot, but Evan Newton made a big save on Jack McInerney’s penalty attempt, and then denied Ben Speas on the rebound to preserve the lead.

Newton continued to come up big for FCC through the second half, denying chances from Eugene Starikov and Soony Saad on the way to the victory.

The Riverhounds will be pleased with their defensive performances through their first two games, but have yet to find the back of the net in 2018.

Penn FC have also struggled to find the back of the net in their first two matches, making the draw palatable for both sides.

Despite the draw, the Riverhounds did create chances throughout the match. Romeo Parkes, Joseph Holland, and Christian Francois all created opportunities for the Riverhounds, but poor finishing and strong goalkeeping from Romuald Peiser kept the match level.

Penn FC did create an opportunity, with newly signed Tom Heinemann having a look at goal, but his shot was easily saved by Dan Lynd.

Phoenix Rising found themselves in second place in the western conference after a 1-0 road result over 1868 FC.

Solomon Asante’s stoppage time penalty was all that separated the sides despite a host of chances throughout the match.

Billy Forbes found Asante in the box just before full time. Some nifty footwork from Asante and a poorly timed challenge from James Kiffe saw the referee point to the spot. Asante made Carl Woszczynski guess the wrong way on the penalty, and finished to the left side of goal.

Sac Republic’s two-goal comeback late in the second half snatched points from the Toros who are still looking for their first win of 2018.

The Toros jumped out to a lead from the penalty spot in the 51st minute from Todd Wharton.

Sac Republic had a chance to level the match in the 75th minute with their own penalty kick chance, but Keven Aleman’s shot couldn’t fool Nico Corti, and the chance was saved.

The Toros doubled their lead just three minutes later when Jorginho James scored a curling effort from the top of the box, seemingly wrapping up the win in the 79th minute.

Sac Republic stormed back in the final ten minutes to steal the point. Adam Moffat helped create both goals for Sac Republic, first crossing for Cameron Iwasa in the 81st minute, then forcing an own goal in the 92nd minute from Conor Donovan.

The Foxes earned their first win midweek, and wasted no time getting their second.

Juan Pablo Caffa’s gorgeous free kick opened the scoring in the 15th minute for the Foxes, with Jaime Siaj header answering back in the 21st minute for OKC Energy.

The game remained level until Rony Argueta won it for the home side in the 78th minute. OKC Energy failed to clear a ball played in by Caffa, and Argueta tapped in the winner.

OKC had a chance to level the match in the 82st minute, but Richard Dixon’s wide open shot from the left side of the box sailed wide.

Lights FC earned an impressive home win over the red hot Rangers, keeping Kharlton Belmar in check on their way to their second win of 2018.

The Rangers opened the scoring in the 18th minute when Rodrigo Saravia slammed home a loose ball at the top of the box.

The Rangers advantage lasted until the 53rd minute, when Carlos Alverez produced a near mirror image of the Saravia goal from the first half.

The Lights continued to absorb pressure from the Rangers, and Ricardo Ferrino made key saves to keep the match level.

The Lights ultimately would win on an own goal. After forcing a turnover in the Rangers half of the field, Carlos Alverez floated a ball into the box. Colton Storm attempted to head the ball back to his goalkeeper, but instead put the ball past the onrushing Eric Dick in the 71st minute.