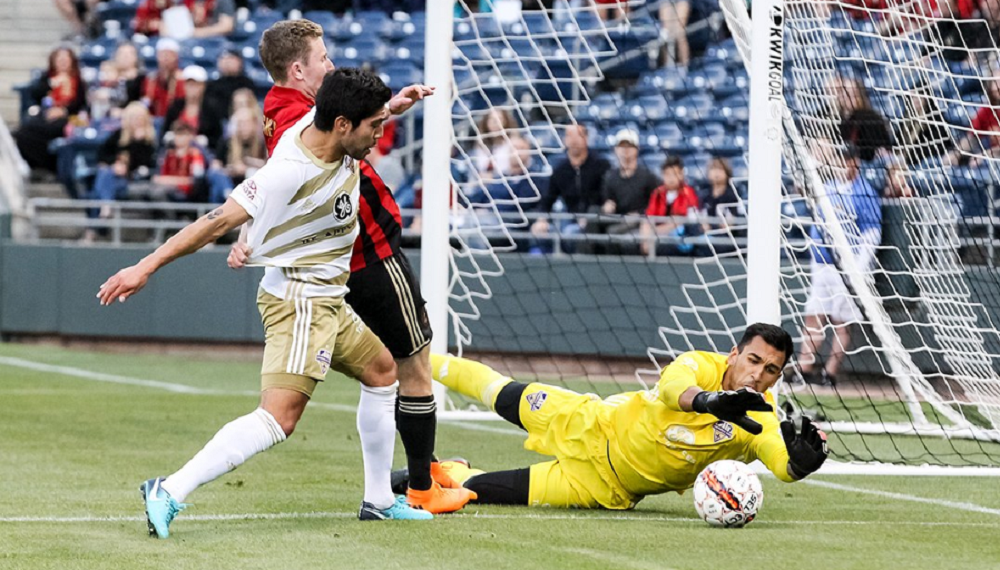 Week 6 of the 2018 USL saw eight draws from the eleven matches on hand.

Louisville City FC and Real Monarchs SLC each dropped their perfect record with a draw and a loss respectively this past weekend.

On the other end of the table, the final team without a point in 2018, the Ottawa Fury, finally earned one with a draw.

Let’s take a look at the rest of the action from this weekend:

The Fury earned their first points of the season stealing two points away from NCFC with a late own goal from Alex Tambakis.

NCFC opened the scoring in the 35th minute as Daniel Rios finished off a passing sequence with Marios Lomis. Rios’s shot found the top-right corner of the net setting NCFC up for a road victory north of the border.

The Fury lacked scoring chances throughout the match, but especially in the second half. They made the most out of what they got however, with Cristian Portilla forcing an own goal when Fury goalkeeper Tambakis mishandled the shot in the 86th minute.

The Fury improve to 0-3-1 but remain at the bottom of the eastern conference. NCFC are now undefeated in three matches and have a record of 1-3-2.

Louisville City finally saw their perfect start to the season come to an end after conceding a stoppage time penalty to Atlanta United 2.

The hard fought match featured end to end action with LCFC and ATL 2 pressing, creating an exciting match that was scoreless at the break. Cameron Lancaster finally made the breakthrough for Louisville, opening space with a fine turn and firing a powerful shot low to the near post.

ATL 2 were awarded a penalty in the 90th minute when Andrew Carleton was dragged down in the box. It was their second penalty opportunity of the night after Carleton had wasted the an earlier chance from the spot, sending his shot well over the goal.

Carleton made the most of his second chance, keeping the ball low and on frame, and leveling the match in the 90+1 minute.

LCFC and ATL 2 remain unbeaten in 2018 with former improving to 4-0-1 and the latter earning their third straight draw with a record of 1-0-3.

The Riverhounds maintained their unbeaten start to the 2018 season with a 2-2 result in Cincinnati.

The Riverhounds made the most of the opening minutes of the match, scoring in the 6th minute on a wonderful solo run by Jordan Dover. The goal stunned FCC and they went into the break searching for answers.

FCC came back onto the field with improved intensity and found an equalizer in the 59th minute from Danni Konig.

The Riverhounds regained control of the match when in the 73rd minute, Thomas Vancaeyezeele fired home a pass from Kenardo Forbes. FCC answered five minutes later as Kenny Walker pounced on a deflected shot from the center of the box and placed the ball into the net.

Bob Lilley and the Riverhounds improve to 2-0-3 on the season with FCC sitting a point behind them in the standings at 2-1-2.

Penn FC earned a remarkable draw, scoring an 89th minute equalizer on a bicycle kick from Ken Tribbett. Mauro Eustaquio chipped the ball into the back post after the Battery failed to clear a corner kick. In the confussion following the failed clearance, Tribbett expertly executed the overhead kick to tie the match.

The Battery had only gained the lead 12 minutes earlier when Ataulla Guerra beat the Penn FC backline, dribbling around the keeper, and finishing into an open net.

The Monarchs perfect start to the season came to an end against the Rowdies Saturday night.

The hosts closed out a tightly contested first half in style when Joe Cole forced a turnover deep in the Monarchs’ territory, creating a one-on-one break. Cole deftly maneuvered around the goalkeeper and slotted home in the open net in the 40th minute.

The Rowdies closed out the match in the second half with Georgi Hristov scoring his 57th goal for the Rowdies, tying the club record held by Derek Smethurst. It was Joe Cole providing the assist for the historic goal, slipping a pass to Hristov that was well finished by the forward.

The Rowdies, 4-2-0, move into second place in the eastern conference, while the Monarchs, 4-1-0, stay in third place in the west.

A battle of two fine goalkeepers saw a thrilling scoreless draw between the Switchbacks and Sounders FC 2.

Sounders FC 2 goalkeeper Calle Brown, and Switchbacks goalkeeper Moise Pouaty showed the quality throughout the match, making jaw-dropping saves and denying two teams that were chomping at the bit.

Browns biggest save of the match came in the 26th minute, keeping Jordan Burt’s goal-bound shot out with a diving save.

A 20th minute goal from Christian Volesky was all it took for Saint Louis FC to earn their third win of the season over a slumping OKC Energy.

OKC Energy lost their fifth straight match, struggling to break down a well organized STLFC. OKC could not register a shot on goal in the match, keeping any hopes of a comeback well and truly out of reach.

The Timbers 2 looked well on their way to their fourth win of the season before Danny Mosovski and Reno 1868 FC came storming back to win their first of 2018.

Portland got on the board in the 38th minute after Victor Arboleda intercepted a bad pass by the Reno backline. Arboleda struck his shot passed J.T. Marcinkowski for the opening goal.

The visitors looked like they would find a first half equalizer, but none came. After the break, Musovski took over for 1868 FC. First he struck in the 75th minute, pouncing on a loose ball in the penalty area from Antoine Hoppenot. Hoppenot would provide the assist on the game winning goal as well,  cutting back and finding Musovski to steal the road victory.

Phoenix Rising left it late to split the points with the Rangers.

A scoreless first half gave way to an offensive assault in the second half with each team scoring twice. Billy Forbes opened the scoring for Phoenix in the 66th minute before Kharlton Belmar pulled the visitors level just four minutes later.

Belmar scored a second in the 88th minute, seemingly wrapping up a strong road win for the Rangers. Phoenix Rising would have none of it, scoring just a minute later from Solomon Asante.

Phoenix Rising and the Rangers improve to 3-1-2 on the season.

Los Dos looked like they were on their way to their first win of the season before New York Red Bulls II snatched a late equalizer.

Los Dos took advantage of a slow start from NYRBII to open the scoring in the 35th minute. Ulysses Llanez Jr. received the ball at the right side of the box before firing home at the near post to beat Evan Louro.

The home side had a number of chances to extend the lead, but Louro did well to keep the match in reach. His strong play allowed Amando Moreno to pull the visitors level in the 78th minute.

The draw keeps NYRBII, 3-1-2, unbeaten in their last four matches. Los Dos, 0-4-3, earn just their third point of the season.

San Antonio FC continued to struggle in front of goal, but Diego Restrepo and the defense stood tall, frustrating the Foxes in their 0-0 draw.

The Foxes held the bulk of the chances early on the match but could not find the net. SAFC were reduced to 10 men in the dying moments, but the Foxes could not take advantage.