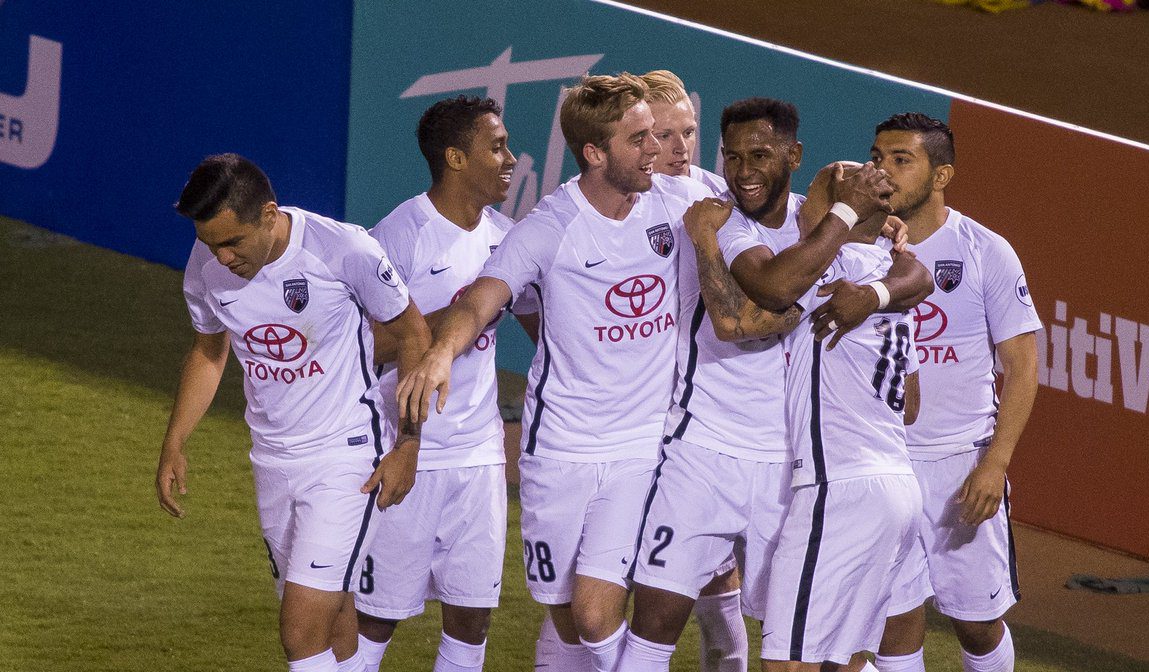 Week 7 of the USL season featured some amazing goals and big storylines.

In Las Vegas, a struggling San Antonio FC got their first win since March 24th, dispatching the previously unbeaten Las Vegas Lights FC. Their struggling offense finally put together a big result which should help them build confidence moving forward.

Elsewhere, FC Cincinnati scored a wonder goal from nearly midfield, leading the way to a big win on the road.

Let’s take a look at the rest of the results from the weekend:

SAFC handed the Lights their first loss, and may have finally turned the corner on a tough start to their season.

It all started in the 17th minute when Ever Guzman struck his first goal of the season finishing off a counter attack against the home side. The visitors doubled their lead in the 33rd minute when Jose Escalante turned in a cross from Darnell King.

SAFC would add one more on the night from the penalty spot. Escalante was brought down in the penalty box, and Rafa Castillo scored from the spot in the 51st minute.

The Lights would get a consolation goal before the night was through. Former SAFC midfielder Carlos Alvarez fired low into the left side of the goal in the 75th minute.

Any hope of a comeback by the Lights was dashed when they were reduced to 10 men after Christian Torres was shown red in the final minutes of the second half.

Neither side was able to find a breakthrough in a hard fought draw between the Independence and Indy Eleven.

The Independence had the best chance to score on the night in the 17th minute. Jorge Herrera’s header in the box went just wide of goal, squandering the chance.

Indy Eleven nearly found an opener in the 62nd minute when Soony Saad fired a rocket at goal. Independence goalkeeper Brandon Miller got just enough of a touch on the shot to make the critical save.

Kyle Bekker pulled the strings and turned in a big performance in NCFC’s big win over Penn FC.

Bekker provided two assists and a goal in a first half onslaught that lasted eight minutes in the first half. First, Bekker found Austin da Luz with a pinpoint cross for an opener header in the 29th minute. Six minutes later, Bekker finished off a cross to double the lead for the home side.

Daniel Rios finished off the match with a simple finish after Bekker squared the ball to him after a deflected shot in the 37th minute. A shellshocked Penn FC had no response.

Neco Brett scored his fourth goal of the season in the 26th minute after Christiano Francois slalomed into the box and found Brett. Brett cut the ball back and then fired the ball into the net low.

The Riverhounds (3-0-3) travel north to Toronto next weekend while ATL 2 (1-2-3) are now winless in five straight matches and travel to FC Cincinnati next weekend.

FCC got a big win over the Fury on the road starting with a goal of the year strike from Kenney Walker.

Walker unleashed a 45-yard volley that sailed into an the net over the head of the Fury’s goalkeeper in the 68th minute. While still reeling, the Fury coneded another goal a minute later to Corben Bone.

Emmanuel Ledesma finished up the scoring in the match, add FCC’s third in the 77th minute, chipping the goalkeeper and icing the match.

Former New York Red Bull Caleb Patterson-Sewell came up big for TFC II in their 0-0 draw with the New York Red Bulls. The visitors held the better of the play, but there was no goal to show for their hard work.

Amando Moreno drew a penalty in the 58th minute, but Patterson-Sewell guessed correctly on Stefano Bonomo’s penalty kick, and the match stayed level.

NYRBII (3-1-3) play twice this week. They travel to Ottawa to take on the Fury before returning home to take on Nashville SC. TFC II (0-4-2) welcome the surging Pittsburgh Riverhounds.

A first half stoppage time goal was the difference in this one.

The Battery got a huge win over the second place Rowdies thanks to Ataulla Guerra’s first half strike. Guerra received the ball from Neveal Hackshaw at the top of the penalty area, and fired a low shot home to open the scoring in the 45+1 minute.

The Rowdies had chances to climb back into the match, but their offense could not find a way to get the ball past Battery goalkeeper Joe Kuzminksi.

Cameron Lancaster opened the scoring in the 13th minute, followed by a second in the 17th minute by Ilija Ilic. Lancaster doubled his bounty just five minutes later to give the home side a three goal cushion by the 23rd minute.

The Steel managed to bull one back thanks to a rocket from outside the box in the 44th minute from Marcus Epps, but could not find additional goals to pull themselves back into the match,

LCFC (5-0-1) extend their lead at the top of the eastern conference and remain undefeated. The Steel (1-3-2) must return to the drawing board after failing to win in five straight matches.

The in-state rivals, Rangers and STLFC, finished all square after Kyle Grieg rescued a point for the visitors late.

The Rangers took an early lead in the 3rd minute when a bouncing ball looped over the STLFC backline, finding Hadji Barry at the top of the box. Barry chipped the onrushing goalkeeper for the easy finish.

The Rangers and STL FC continued to press for goals, but neither side was succesful until the 88th minute. A low cross into the box found its way to Kyle Grieg for a sliding finish at the back post.

The Rangers (3-1-3) are now undefeated in their last four matches while STL FC (3-1-3) sit one point back in the standings from the Rangers on goal differential.

OCSC rebounded from last week’s loss to stay at the top of the table in the western conference.

The OCSC defense was on full display, keeping the Switchbacks from gaining much ground, keeping the visitors off the scoreboard throughout the match.

Aodhan Quinn was the difference in the match for the home side, scoring from the penalty spot in the 6th minute after Mark Segbers was taken down in the box.

The struggling Energy had no answers after Kevin Partida opened the scoring in the 64th minute with a stunning goal. Partida found the top right corner of the net from about 20 yards from goal, punishing the OKC Energy defense for not closing him down.

Lindo Mfeka put the game out of reach in the 87th minute on a ball cutback to the top of the box from Antoine Hoppenot.

The Energy were down a man after a 37th minute red card to Miguel Gonzalez, but still found ways to create opportunities but could not finish them.

1868 FC (2-3-1) will look to keep their momentum rolling when they welcome Rio Grande Valley midweek while OKC Energy (1-6-0) are winless since their season opener and have lost six straight.

Down a man and a goal, Phoenix Rising found a way, scoring a late equalizer from Alessandro Riggi.

Amadou Dia was shown a red card in the 27th minute for a reckless tackle on Juan Pablo Caffa, and Phoenix Rising had to play the final hour of the match down a man.

Samuel Asante proved vital for the home side, finding Riggi streaking into the box in the 90th minute. Riggi finished first time with a powerful chipped effort that beat the onrushing goalkeeper.

Phoenix Rising (3-1-3) continue to challenge for a top spot in the west while the Foxes (2-1-5) sit just one point back, but in seventh place.

Another game to feature some late drama after the Roughnecks looked to be on their way to their first win of 2018.

Joaquin Rivas opened the scoring in the 2nd minute, heading a cross past Sac Republic goalkeeper Josh Cohen. The Roughnecks attempted to protect the lead, and Sac Republic pushed hard for an equalizer for the rest of the match.

They finally got one in the 89th minute when Espino Vazquez was slipped into the box by Vilyan Bijev. Vazquez placed a measured left footed strike to the near post to level the match.

Sac Republic (4-0-3) are the only undefeated team in the western conference, while the Roughnecks (0-3-3) are struggling to find answers.