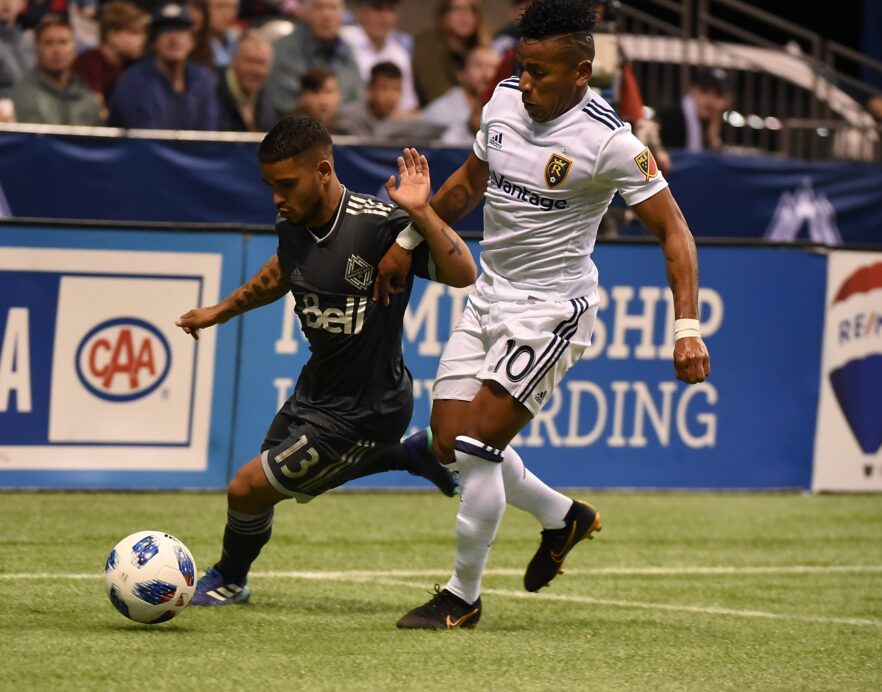 When you’re struggling for success, it feels like every thing you do becomes pressed against you even more. The Vancouver Whitecaps may have been struggling, but that changed with a comfortable performance on Friday night.

Carl Robinson’s team used a pair of second-half goals in a four minute span to down visiting Real Salt Lake 2-0 at BC Place.

It took an hour for the hosts to really assert themselves offensively, after being pushed back most of the first-half.

Nicolas Mezquida was fouled inside of the box by Nick Belser in the 74th minute, which gave the hosts a penalty kick. Cristian Techera stepped up and scored the penalty to give Vancouver a 1-0 lead.

It only took four minutes after breaking the deadlock for Vancouver to add an insurance goal. Alphonso Davies’ found striker Anthony Blondell on the goal line who tapped in his first goal of the season.

Stefan Marinovic made five saves in the clean sheet for the Whitecaps, his first since March 24th. Nick Rimando made two saves for RSL,but ultimately the visitors suffered their second loss out of their last three matches.

The Whitecaps (4-4-1) ended a three match losing run with the win, and next travel to Minnesota United on May 5th.

After finding it hard to score goals early this season, Techera broke the deadlock by scoring the winner for the Whitecaps. Despite earning a second yellow card for celebration after the goal, the 25-year-old helped his side to a massive three points at home.

After breaking the deadlock, Robinson’s men continued to press for more despite being a man down. Davies who had come off the bench, made a quick impact assisting on the Caps’ insurance goal.

Besler will want to have a short memory of Friday’s match, after conceding the penalty that led to the hosts winner. This was the 24-year-old’s second consecutive appearance, but he could find it hard to remain in RSL’s starting XI now.