With Kaku ready for bigger role, Red Bulls have plenty of options in midfield 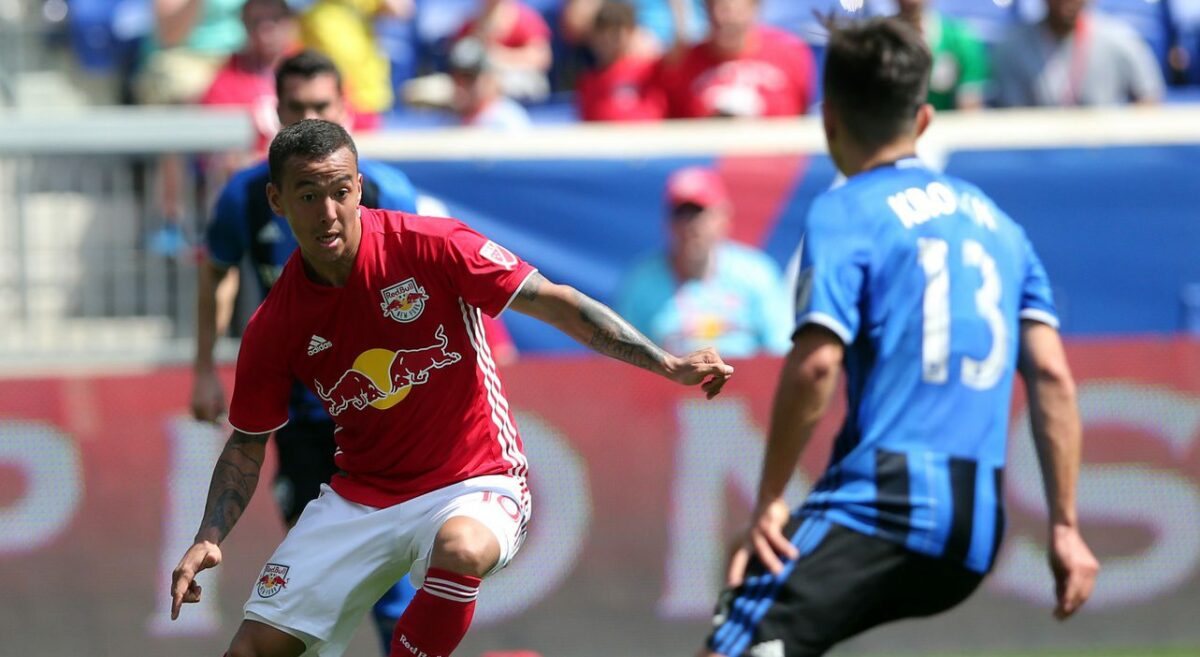 While the Red Bulls have relied on its depth to handle the extra workload, an unexpected, though welcome problem has emerged. How will Jesse Marsch set up the midfield to maximize the emerging young talents who have contributed so far this year?

The match against the Montreal Impact may have provided some answers for the short term, and it lies in change of formation. While the lineup sheet showed the team lineup in a 4-2-3-1, the real formation the team can be seen on the following heat map:

The Red Bulls average position on the day was much closer to the infamous 4-2-2-2 formation that Jesse Marsch has dabbled with over the past three seasons. While the forays into the 4-2-2-2 have often failed the Red Bulls and kept the team from maximizing their best players, they may have finally found the personnel to make it work.

Floria Valot and Alejandro “Káku” Romero Gamarra each play as attacking midfielders in the formation. While it is clear the Gamarra is the first choice playmaker, Valot has earned his spot on the field through strong performances over the last month. What made their partnership flourish, and what may be the key to unlocking the potential of the 4-2-2-2, is that both Valot and Gamarra are comfortable playing centrally or out wide.

Valot has spent the last two and a half seasons with the New York Red Bulls II in USL mainly playing as a wide midfielder and flourished in the role.

Gamarra has also mainly lined up as a wide midfielder in a traditional winger role. His combination of quickness and vision made him a valuable asset on the wing in Argentina. Transitioning to a more central position makes definite use of his vision, and with cover in the form of Valot, he can drift outside to a more comfortable position when the situation demands it.

Further up the field, Daniel Royer has settled into a support striker role that has a bit of freedom to roam underneath Bradley Wright-Phillips, giving the latter an outlet if defenses queue in on the prolific striker.

The withdrawn forward role can be, and has been filled by Derrick Etienne this season at times. Etienne offers a similar outlet for Wright-Phillips as Royer, and carries a similar skill set: willing to take players on the dribble, ability to cross effectively, and a nose for goal.

The biggest question mark for the Red Bulls moving forward is what to do with four viable central midfield starters. Sean Davis and Tyler Adams have been the de facto starting pair, but sitting behind them awaiting their chances are Marc Rzatkowski, and Vincent Bezecourt.

Rzatkowski adds far more bite to the position then either Adams or Davis, has shown himself to be adept at free kicks, and can finish a play when called upon.

His loan from sister club Red Bull Salzburg this winter seemed to indicate he would be stepping into a starting role, but he has had a hard time displacing Adams or Davis, despite his pedigree.

Bezecourt came into this season flying under the radar. He starred for NYRB II as a central attacking midfielder. Few thought he would really get the chance to contribute much to the first team with the acquisition of both Rzatkowski and Káku.

His inclusion in the lineup this season has mostly been as a holding or defensive midfielder, and he has flourished. Bezecourt leads the team in tackles per game, and has shown similar offensive abilities to Rzatkoski, though a bit less refined.

The odd man out, should the Red Bulls continue to experiment with the hybrid 4-2-2-2 would be Alex Muyl. While Muyl has strong defensive instincts, the offensive side of his game is a few strides behind the others mentioned.

Muyl could function as an underneath forward like Royer or Etienne, but he has shown a better understanding of his role when operating from wider positions.

Marsch is really in an enviable position, with some very good options at just about every midfield position. The trick will be if he can balance the expectations of the players, and rotate the lineup appropriately to allow the team to continue to operate at a high level.

The Red Bulls still have plenty of time to deliver answers, and with CCL behind them, their renewed focus should provide a clear path to understanding how they move forward.