A look at how the Red Bulls press smothered NYCFC 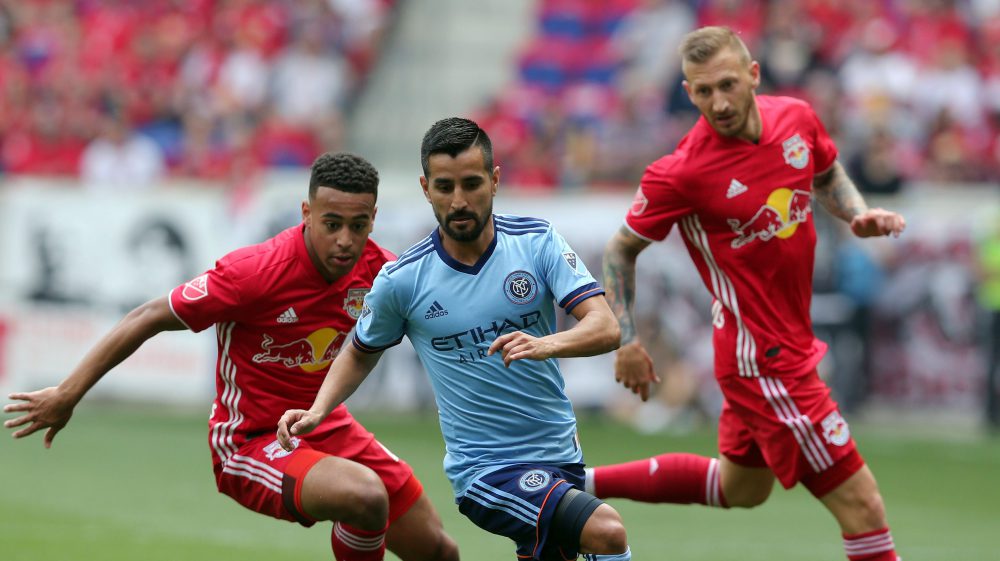 The New York Red Bulls approach against New York City FC was not surprising. Still, the high press showed the cracks in NYCFC, and may have provided a blueprint for how other teams can negate their high powered offense.

Sean Davis and Tyler Adams were critical to the Red Bulls’ approach, and ultimately their 4-0 victory, over their Hudson River rivals. The central midfield pair made things difficult for NYCFC throughout the match, swallowing up and redistributing any passing sequences through the middle of the field.

The opening goal of the game is a perfect example of his this worked both offensively, and defensively.

Before the Red Bulls gain possession, they compress the field. They form a block of players that prevents the defender from being able to do anything but clear the ball up field. Attempting to control the ball so he can dribble out of this situation, or trying to play a short pass is far too dangerous, as the Red Bulls have too many bodies in the area.

NYCFC played into Red Bulls hands here by remaining too narrow. When a team attempts to press the way that Red Bull press, quick passes and changing fields is the best way to negate the system. If the ball becomes static, or the team remains narrow, the Red Bulls can effectively surround them and force mistakes.

As the ball is cleared to midfield, David Villa reacts appropriately and attempts to play a one touch pass for Maxi Moralez. Villa recognized in this moment that all 10 of the Red Bulls’ field players were compressed into a 1/4 of the field in NYCFC’s half. If Moralez managed to receive this pass in stride, NYCFC were on the verge of a 3-on-2 break against the Red Bulls.

The positioning and quick thinking of both Sean Davis and Tyler Adams becomes critical in this moment. Moralez is slow to see the pass from Villa, but Adams reads it and intercepts. Rather than play the ball back to Aaron Long, Adams plays a lateral ball to Davis.

This pass is critical to the transition that Red Bull craves. By playing the ball to Davis, it gives the Red Bulls the chance to immediately start the attack. Playing the ball back to Long would have allowed NYCFC defense to set up, and track the attackers on the front line.

By playing the ball to Davis, the central hub of the midfield is receiving the ball facing goal and with a view of all of the attacking players. Davis sees Bradley Wright-Phillips and quickly chips the ball to the striker.

From this point on, NYC FC must go into survival mode. Emergency defending can effectively shut down an attack, but it comes at a steep cost. All of the attention goes to the ball and the attacker in possession, while the other attacking players can carry on unfettered. The image below shows all of the NYCFC defenders watching the ball, and failing to react to continued pressure from the Red Bulls.

NYCFC’s ball watching is what ultimately concedes the goal on the play. Sean Johnson does well to save the shot from Wright-Phillips, but the ball is parried back into dangerous territory. Ben Sweat does not recognize the threat until it is too late.

This is the Red Bulls at their most dangerous, but it is also against a team that played into their hands. NYCFC continued to try to play through the midfield, starting the attack from their backline. As a result, throughout the first half, Red Bull was able to force mistakes and create scoring opportunities.

Patrick Viera, to his credit, saw the issue and attempted to correct it in the second half by keeping the ball wide and attempting to overload the wings, but it was already too late.

For New York City FC to prove themselves as the best team in MLS this season, they cannot be so rigid in their approach that they become predictable. In many ways, it is a familiar criticism for Red Bull fans to hear, as it is one that Jesse Marsch is often accused.

If you only operate with a single approach, teams will begin to understand how to defeat you.

The Red Bulls are the third team to do this to NYCFC this season. Atlanta United and the Portland Timbers also gained points against NYCFC with a similar approach, and in those matches, opposing teams have outscored NYCFC, 9-2, and they gained just a point from those three matches.