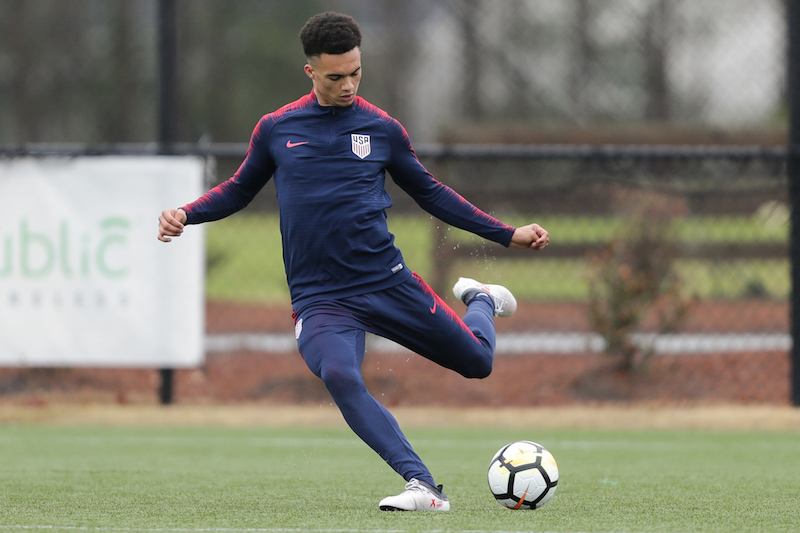 PHILADELPHIA– The U.S. Men’s National Team may not be preparing for this summer’s World Cup but they are preparing for the next generation of players to come in and make an impact, and 20-year-old Antonee Robinson is one of many players that has been called into this month’s camp that is hungry to prove his worth to the coaching staff.

Born in England, Robinson has been called into his second consecutive camp despite not appearing in the U.S.’ friendly with Paraguay back in January.

Knowing there will be no trip to Russia for the U.S. this summer, the goal will be to start fresh. With the average age of the team sitting at 22, Robinson feels the group is starting to gel together ahead of their friendly against Bolivia on Monday in Chester.

“It’s been a brilliant time so far,” Robinson told SBI. “The camp is starting to get rumbling now with all of the players showing up. It’s a good group to be coming through with. We’re all coming into the camp from different formations and tactics but we get used to each other pretty quickly and it will only lead to the chemistry growing between us.”

Robinson, a natural left back, is coming off a dramatic campaign with Bolton Wanderers where the team became safe from relegation on the final day of the season. His 30 league appearances in 2017-18 was the third-most out of any of the Bolton defenders, while his four assists were tied for the most on the team.

“Yeah the atmosphere that day was the best I’ve been apart of,” Robinson said of the atmosphere on the final match: a 3-2 home success against Nottingham Forest. “When we went, 2-1, down everybody thought that was it for us, but we dug in and got the result we needed. The other results that day went our way and next thing we knew fans we’re storming the pitch so you could see how much it went to everyone.”

After learning a lot in his first full season in a senior squad, Robinson will look to translate some key traits into his play with the USMNT. Domestic soccer is a different level than international soccer, and Robinson feels he will need to take the next step in order to become a better player.

“I’m really trying to work more towards game management and professionalism,” Robinson said. “Also trying to be much more physical will be important whether it’s in training or in the game itself. You need to be physical when playing against men and you have to know at this stage that every match is important.”

Robinson is one of nine players who are seeking their first cap for the USMNT, and joins a backline group that has just 37 caps between them. Tottenham loanee Cameron Carter-Vickers, who also played in the EFL Championship this season with Sheffield United and Ipswich Town, has formed a nice partnership with Robinson over the last two camps.

“I properly met Antonee in the January camp and our partnership has continued to grow since,” Carter-Vickers told SBI. “This time around we’re roommates and I’m hoping we can continue to stay in touch when we go back to England.”

The friendly against Bolivia is not going to be the deciding factor on what the USMNT looks like in the future. However, the competitiveness will still be there between these two countries with the U.S. also preparing for trips to both Ireland and France in June. Dave Sarachan’s team will certainly look to put in a good shift and give the fans something to be excited about, while Robinson has an individual goal he would like to check off his list.

“To earn my first cap would be important to me for sure,” Robinson said. “As a team we hope to gel together and continue to grow with some other friendlies coming up. If we do what we’re capable of against Bolivia, then who knows what could happen against Ireland and France.”