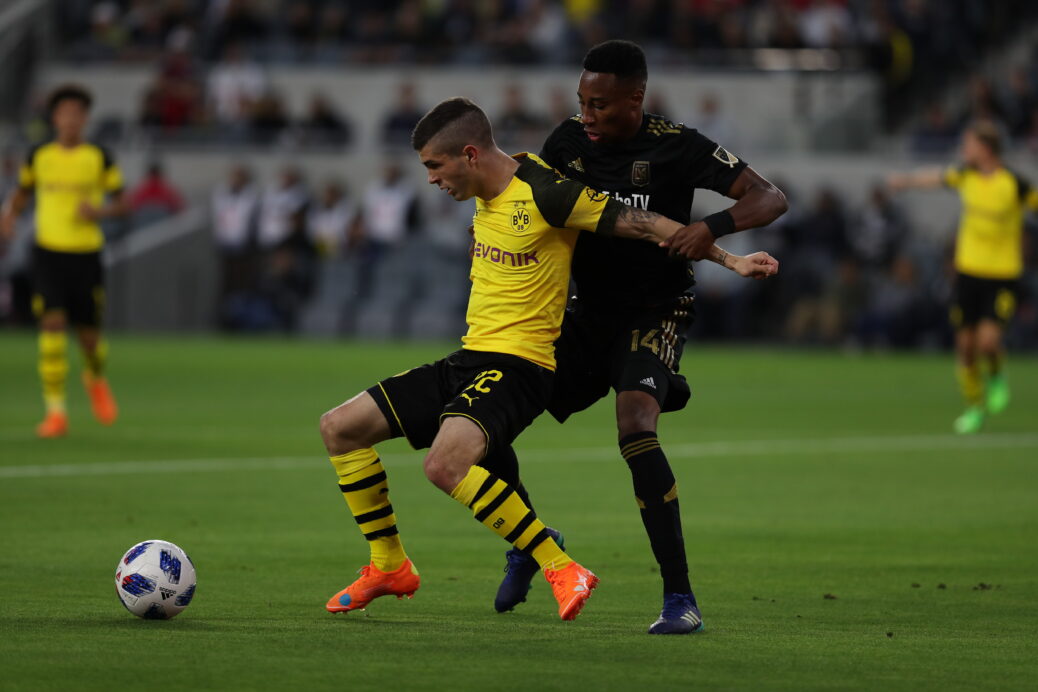 With U.S. Men’s National Team duty looming, Christian Pulisic got an extended run out in his first club match on U.S. soil.

Pulisic played 55 minutes on Tuesday night as Borussia Dortmund earned a tie with LAFC at Banc of California Stadium. Pulisic

“The stadium was unbelievable,” Pulisic said. “It was awesome to play with Dortmund for the first time in the USA against a good American opponent, LAFC, against a new team, and I had a lot of fun out there.

“Just to return home is awesome, man. I missed home. It was great. I had some family out here. It was just an awesome day.”

While Pulisic put in a strong shift for a majority of the match, the goals came after the midfielder was taken out of action. Aaron Kovar scored the opener in the 77th minute before Max Phillip gave Dortmund an equalizer just minutes before extra time.

The match left Pulisic impressed with LAFC’s style of play. The midfielder said the match was played at a “good level” that provided a fun post-season test for a Dortmund team that now has a bit of a break before Lucien Favre takes over for preseason.

“So this year, I would definitely say there were a lot of ups and downs,” Pulisic said. “At the end, we didn’t finish so strong, but we won the games that we needed to, and we ended up accomplishing our goal of getting into the Champions League again. So, we’re going to work to improve even more for next season and do everything we can to finish even higher

“I’m excited to get in next season and work,” he added. “Obviously I learned a lot of things from (Peter) Stoger as well, so yeah, I’m looking forward to it. That’s his job, he has to come in and teach us as much as he can, so hopefully next season will be a good one.”

Now Pulisic looks forward to joining up with the USMNT for a friendly against Bolivia. He’s expected to begin training with the group on Friday before taking the field on Monday for his first USMNT appearance since the end of World Cup qualifying.

“We have a little bit of a younger roster this time around,” Pulisic said. “I’m going to go in there and help all my teammates and do what I can to get better every single day. That’s all we can do looking forward and ultimately, that’s our goal: to be in the next World Cup.”