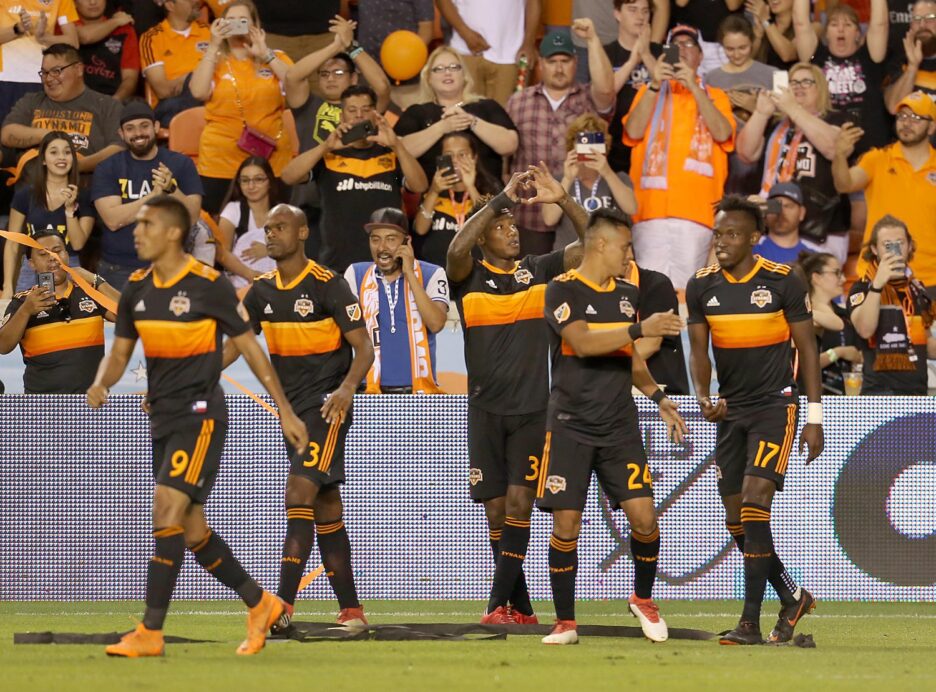 The 2018 Major League Soccer season has been a head scratching one for the Houston Dynamo in the early stages. An opening day thumping of Atlanta United seemed like a distant memory after some disappointing defeats brought the Western Conference club back to reality over the last few weeks.

Wilmer Cabrera’s side rose to the occasion on Saturday, outlasting the LA Galaxy 3-2 at BBVA Compass Stadium. After being pegged back twice by Sigi Schmid’s men, the Dynamo dug deep and got a 90th minute winner from Memo Rodriguez.

Rodriguez headed in from close-range after Romell Quioto struck the crossbar from a right-footed shot. It was the substitute’s first goal of the season, and his first since July 22 of last year. The win was Houston’s third of the season, and their second in the past three fixtures. The 22-year-old could not quiet his emotions post match after playing the hero for his team.

“It was amazing, it feels just like scoring my first goal all over again. Probably even better,” Rodriguez said. “The team was able to fight hard against a team like LA who we knew would come in with great intensity. We matched their energy and it’s just a huge three points for us right now.”

The sides were level at halftime with Giovani Dos Santos canceling out Alejandro Fuenmayor’s opener for Houston. Fuenmayor’s got on the end of Quioto’s assist for his first MLS goal.

Dos Santos slotted in a rebound after Joe Willis could not grasp Zlatan Ibrahimovic’s effort in the 39th minute, allowing the Mexican forward to equalize. Quioto’s lovely taken free kick in the 47th minute regained the lead for Houston who ultimately allowed LA a chance to level things again late. Ola Kamara’s composed left-footed finish in the 85th minute looked to have given the visitors a valuable road point.

However, the hosts got the last laugh grabbing their first victory against the Galaxy since a 3-0 triumph back in July 2015.

“Overall it was a rewarding result for a group of men who have fought a lot today and they went with a good mentality on the field,” Cabrera said. “Against a team that is very talented like LA is, we played better I thought. We did get punished once or twice by a few mistakes that we made, but we showed resilience in all aspects and I’m happy for the players.”

Against a side like LA who has a slew of attacking talent, the Dynamo kept them at bay for most of the match. Dos Santos had two shots on goal, while Kamara and Ibrahimovic only mustered one apiece. To be able to limit a dangerous attacking front like the Galaxy’s, is a job well done by Cabrera and his players for sticking to their gameplan from the opening whistle.

Quioto had a terrific performance up top, creating several opportunities for his team and even scoring himself. The Honduran probably deserved another goal if it wasn’t for hitting the crossbar in the build up to the winning goal. With his international teammate Alberth Elis fairly quiet on the night, Quioto was able to step up big time when his team needed him.

“This is how we want to play at home,” Cabrera said. “Just like against Atlanta and Toronto, we were able to get an early goal and build from it. We want to put teams under pressure and we continued to do that against a team like LA who can beat you in a number of ways. I definitely see us building off of this performance because we have made mistakes in the past, and a win like this can give us great confidence as we prepare for a tough road stretch.”

The Dynamo begin a two-match road trip on May 11 in Vancouver, against a Whitecaps team that defeated them 2-1 in Houston back on March 10. Even with a big three points on Saturday, Cabrera knows work still needs to be done for the team to take the next step.

“Tonight was good, but I hope we come out next week with an even better mentality,” Cabrera said. “We’re going through the right path, we’re playing better this year than last and I don’t see a lot of our style of play changing. We know this is how we want to play and if we do then good results will continue to come for the Dynamo.”