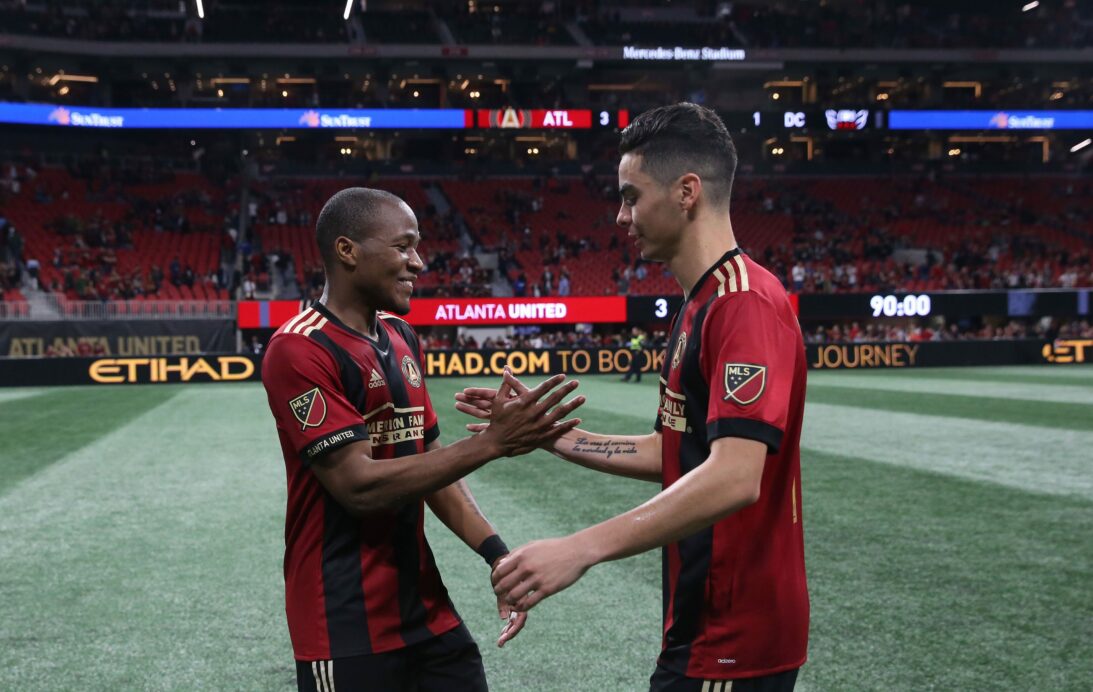 With one third of the 2018 Major League Soccer season over, we’ve gotten an idea of which teams will contend for the Supporters’ Shield and which ones are still a work in progress.

The World Cup break is only a few weeks away, which means teams should isolate the next stretch of three or four games to earn as many points as possible for before at least a week off.

The Eastern Conference is in focus in Week 12, as the defending champion tries to right the ship while a challenger enters Mercedes-Benz Stadium in an attempt to knock off the best team in the league.

Below is a look at every game taking place from Friday to Monday in Week 12.

The top team in the East plays host to the fifth-place side in Sunday’s national television showcase.

Atlanta United bounced back from a home loss to Sporting Kansas City by knocking off Orlando City in a rivalry clash last Sunday.

The New York Red Bulls have won four of their last five games, just like the Five Stripes. Jesse Marsch’s side should use Sunday’s clash as an early test as to where it stands in the East. A draw or win would be a nice result for the Red Bulls.

It’s not time to completely panic in Toronto, but it’s damn near close time to break the glass case surrounding the panic button.

With the injury situation not getting any better and Sebastian Giovinco suspended, the Reds have to piece together a lineup to take on Orlando City on Friday night.

If Greg Vanney’s side really is the deepest squad in league history, it should be able to pull out a result at home against the Lions, who had their six-game winning run ended in Week 11.

Toronto is undefeated in its last four games against Orlando, with a pair of wins coming a year ago.

Fox’s follow-up to the FA Cup final should be an intriguing affair between LAFC and the Portland Timbers.

LAFC hasn’t lost since the 5-0 thumping it received from Atlanta on April 7, while Portland is in the middle of a four-game winning streak.

The key to the contest, as it is for most Timbers games, is Diego Chara, who must shut down the central channel of the field to force LAFC to play exclusively on the wings.

Columbus and New England are both in the second tier of East teams, and they’re looking to join Atlanta, NYCFC, Orlando and the Red Bulls in the mix of serious contenders.

Two of the top American goal scorers will be on display on Saturday, as Gyasi Zardes and his eight goals face off against Teal Bunbury and his five tallies.

Everything sets up for an easy NYCFC victory on Saturday afternoon, as the struggling Colorado Rapids come to Yankee Stadium.

The Rapids enter on a four-game losing streak and is playing at a less than ideal time that would still be morning in Commerce City.

The opening game on Saturday’s slate should give NYCFC an opportunity to right the ship after earning one win in the last four contests.

The Vancouver Whitecaps continued to disappoint at home earlier in the week, as they dropped points in a 2-2 draw with the San Jose Earthquakes.

Now Carl Robinson’s side must find a way to steal those points back on the road against FC Dallas.

That’s going to be a tough task for the Whitecaps, as FC Dallas has a single loss on its resume this season.

Nick Rimando leads Real Salt Lake to the northeast on Saturday after he picked up his 200th win in Week 11 over D.C. United.

Both RSL and the Union received solid contributions from Homegrown players early in the season, and that should continue Saturday as one of the key matchups features RSL forward Corey Baird against Union center back Auston Trusty.

Week 12’s late-night affair might put you to sleep in the first half, or it could be a contest with a handful of goals.

The Quakes showed some life on the road Wednesday in a 2-2 draw with Vancouver, while D.C. is in the middle of a brutal west coast swing before the opening of Audi Field.

The Black and Red won last season’s matchup 4-0 in one of the final games at RFK Stadium.

Minnesota United needs to reverse its form with losses in six of the last eight games.

Sporting Kansas City should look at Sunday’s trip to Minnesota as a chance to pad its lead atop the Western Conference.

Peter Vermes’ men have lost once since Week 1, and appear to be the class of the West through two-and-a-half months.

Sunday afternoon’s clash in Bridgeview has the potential to be a sneaky good matchup.

The Dynamo scored five goals while picking up four points in its last two games, while the Fire are slowly working back to form.

In the lone contest between the teams in 2017, Romell Quioto and Mauro Manotas scored a goal each in a 3-0 Dynamo rout.

No, Zlatan Ibrahimovic didn’t make MLS create a holiday for him so the LA Galaxy could play on a Monday afternoon.

In all reality, the extra rest probably won’t help Sigi Schmid’s side, as its defense has looked horrendous.

The good news for the Galaxy is they’re facing a struggling Montreal Impact side buoyed by the playmaking of Ignacio Piatti.

Given how poor both defenses have played, we wouldn’t be mad about seeing a Ibrahimovic vs. Piatti 5-4 game.