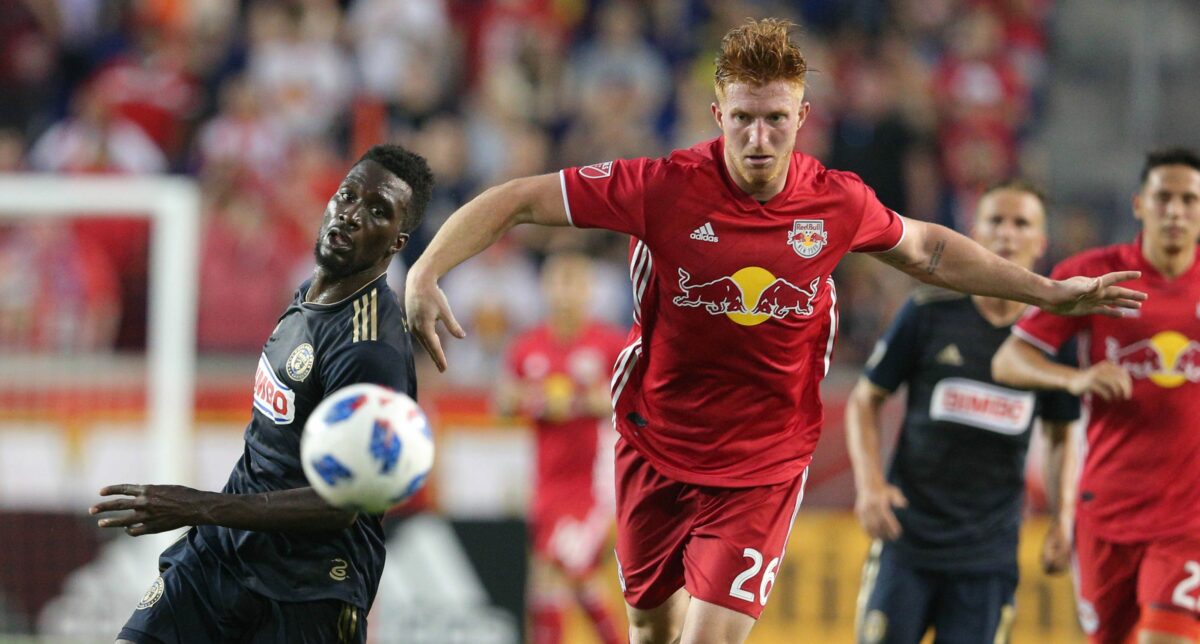 Saturday’s 0-0 draw against the Philadelphia Union was certainly not the desired result for the New York Red Bulls, who have gotten used to scoring frequently against opponents at home. However, that did not entirely dampen the mood of Jesse Marsch and company.

“I’m not taking negatives away from this. I’m taking positives,” the coach said after the match, and there was an obvious positive to take out that match. It was a standout night for a couple of defensive players, as Tim Parker continues an impressive run of form and Ryan Meara recorded first MLS clean sheet in more than six years.

“As a defensive group we’re happy to keep it clean at the back,” Parker said after the match.

Doing so has become habit for Parker and the Red Bulls, who boast one of the league’s better defensive records this season. It has all come in his debut season with the Red Bulls, seamlessly transitioning into a new team and system.

“I don’t think we’ve ever had a player come into this team and fit so smoothly into what we do, and that’s a lot of credit to, I think, our scouting team and our sporting team of identifying him as the type of player that we need,” Marsch said. “It’s a big credit to Tim and his excitement and anxiousness to try to come here and fit in right way and establish himself on our team.”

“(I had to) just fully buy in. I think it’s hard to have a style where in Vancouver I played such a different style and here it’s something so new, so I’m really throwing myself fully into it,” Parker said. “Dealing with the ups and downs and mistakes, learning from them, and continuing to push them along.”

Aaron Long, Parker’s partner at center back, was also very complimentary of the newcomer.

Parker and Long have barely missed a beat in their young partnership. They have looked comfortable with each other each time they have played together, something that Long attributes to their matching habits.

“I think me and Tim think similarly,” Long said, “so I think we make a great partnership back there. More than anything, he holds himself accountable and I do the same, so I think that’s why we are good partners.”

Additionally, it was a remarkable day for Meara, who is playing his first stretch of MLS games for the club since his rookie season in 2012. The goalkeeper followed up a strong showing in Atlanta last week with an equally notable effort against the Union, making a pair of saves in the process.

Marsch, naturally, had only nice things to say about Meara. The coach was more than pleased with his record of only goal conceded in 180 minutes, but  “it’s also the way he played, the saves he made, the clarity he had on the field. … It was like he’s been there for years.”

After his first league start at Red Bull Arena in six years, Meara was happy to have had the chance.

“Anytime you can play here it’s great,” he said. “It doesn’t feel like [it] between all the Open Cup and Red Bull II games; I feel like I’ve played here a bunch but anytime you get a game, it’s good. Opportunities are hard to come by so I try to make the most of it.”

Meara was also tasked with saving a C.J. Sapong penalty early in the second half, but the Union forward sent the ball wide of the net. The goalkeeper said that his side “got a little bit of a break,” but he had a feeling his team would get lucky.

“As I was diving I was kind of looking at it and I was like, man, that’s a little far,” Meara said, “and luckily it doesn’t hit the back of the net. So I don’t know, it was a questionable handball [call]. I don’t think Kemar [Lawrence] did it on purpose; he wasn’t even looking at the ball, so sometimes things have a way of working themselves out.”

While it was not a perfect outing for the Red Bulls, it could have been worse.

“We’re disappointed to not get all three points but in the end they missed a penalty,” Meara said. “I guess it could’ve gone either way so I guess we’ll take the point tonight.”