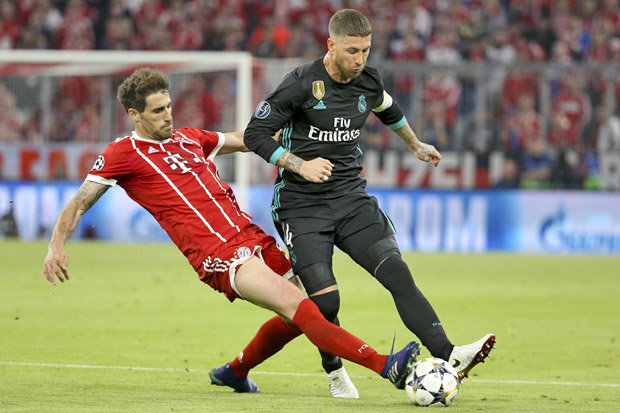 Cristiano Ronaldo may have carried Real Madrid to the semifinals of the UEFA Champions League, but it was the star forward’s supporting cast who answered the call against Bayern Munich to advance to the finals.

Real Madrid advanced to their fourth UCL final in the past five seasons, with a 4-3 aggregate triumph against the Bundesliga side on Tuesday at the Santiago Bernabeu.

Zinedine Zidane’s men answered back in quick fashion, with Karim Benzema heading in from the right side of the box in the 11th minute.

The French striker added to his tally in the 48th minute, finishing from close range for his 10th goal in all competitions this season. Bayern keeper Sven Ulreich misjudged a back pass from his defense which allowed Benzema a simple tap in.

Bayern did not hang their heads however as they fought back after the hour mark. James Rodriguez beat Keylor Navas in the 63rd minute, finding the bottom-left corner with a right-footed effort.

It was the Colombian’s first goal in the this year’s Champions League.

Navas stood tall the remaining of the way to hold off a late Bayern attack. The Costa Rican kept Tolisso out in the 74th minute before repelling both Rodriguez’s and Thomas Muller’s chances later in the half.

The Costa Rican made a total of nine saves in the second leg win.

Despite only having three shots on goal, Real Madrid defended strongly to book themselves a place in the final. This marks the fourth consecutive time that Los Blancos have eliminated Bayern from the knockout stages of the tournament.

Bayern will surely be disappointed that they could not get more from the match, owning 59% of the match possession and outshooting Real 10-to-3 in efforts towards goal.

Real Madrid will face the winner of Liverpool/Roma in the 2017-18 UEFA Champions League Final in Kiev on May 26th.

Liverpool travels to Roma on Wednesday for their second leg matchup, holding a 5-2 aggregate advantage.