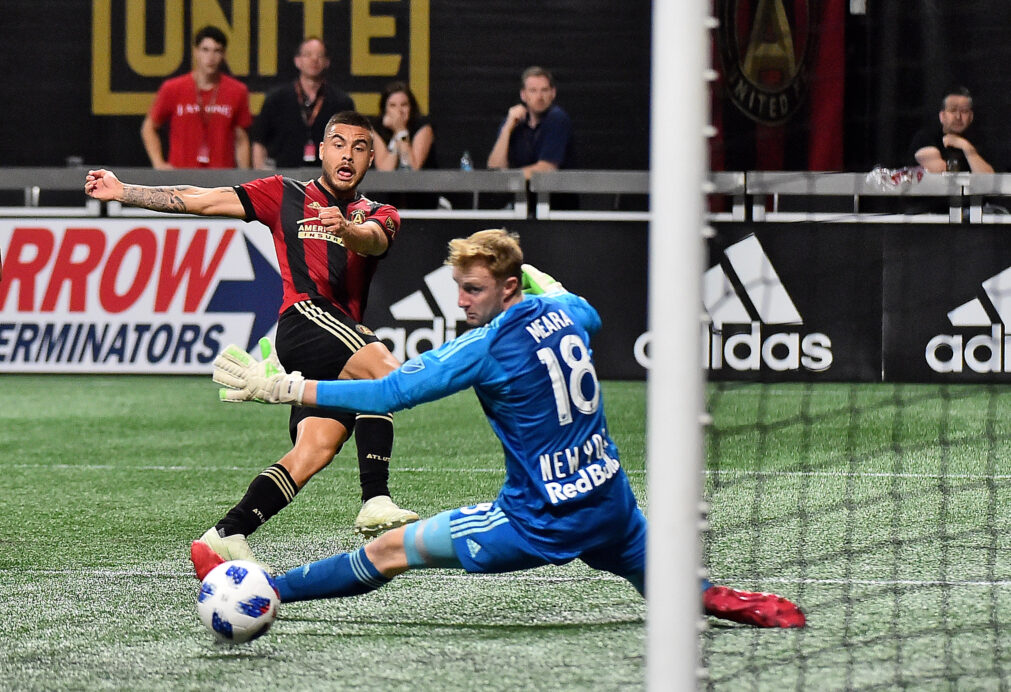 For the New York Red Bulls, Ryan Meara is not a surprise revelation, just another critical piece of depth that makes up nearly every spot on the team’s 30-man roster.

While the backline had another tremendous match, it was Meara who kept the game close until the Red Bulls ran away with the result.

“Ryan made some big saves for us,” said Jesse Marsch after the match. “We all know he is a great goalkeeper. It’s one of the hardest jobs in this league to play behind Luis Robles because he is so reliable, he is so good and he is so ready for every match. But we have known the whole time that Ryan is still a really good goalie and an important guy around here. He showed it last year in the Open Cup run, and he showed it again today.”

Meara was called upon early and often against a talented Five Stripes attack. Josef Martinez and Miguel Almiron’s counter attack in the 21st minute looked to spell doom for the Red Bulls, but Meara’s diving save kept the game level.

Three minutes later, the Martinez was at it again, this time on the break. His one on one attempt was also saved by Meara. When the Five Stripes finally did score a goal, there may have been consternation amongst Red Bull fans, but Meara had kept the game from becoming a blowout early.

The acting captain for the match, Bradley Wright-Phillips shared similar sentiments with his coach.

“When Ryan has to step-in we are full of confidence,” said Wright-Phillips from the locker room after the match. “How he trains and what he has done since he played in the Open Cup last year, there is not too much difference.

“We knew it was going to be tough for us, but I think our back line has been very good this season. When you have a backline like that to build off of, it gives the attackers a bit more time to get the attacking game going.”

Meara entered MLS as a day one starter for the Red Bulls in 2012. Meara impressed in his rookie season, but suffered a hip injury in June of that year, and struggled to return to fitness. During the interim, the Red Bulls acquired Luis Robles, and the rest is history.

Meara’s last league outing was nothing short of disastrous. While on loan at New York City FC, Meara earned a start against the Chicago Fire. The lone goal of the match came on a horrific turnover from Meara while attempting to save the ball from going out for a corner kick. The result was not just a loss for NYCFC, but it was the last time Meara would see the field during his loan spell with the club.

Two years ago, Meara was the starting goalkeeper for New York Red Bulls II and anchored the championship winning backline, setting records in goals against for the season, and winning consecutive penalty kick shootouts to see the Red Bulls into the USL cup final.

The victory in his first league start since 2015 will feel good for Meara, and his team is celebrating the accomplishment right along side the goalkeeper.

“Whenever you see a guy like that get a moment and a chance to show what he is all about in a big game, you get really happy for him,” said Marsch. “The whole team gave him a standing ovation in the locker room, so that was really good.”