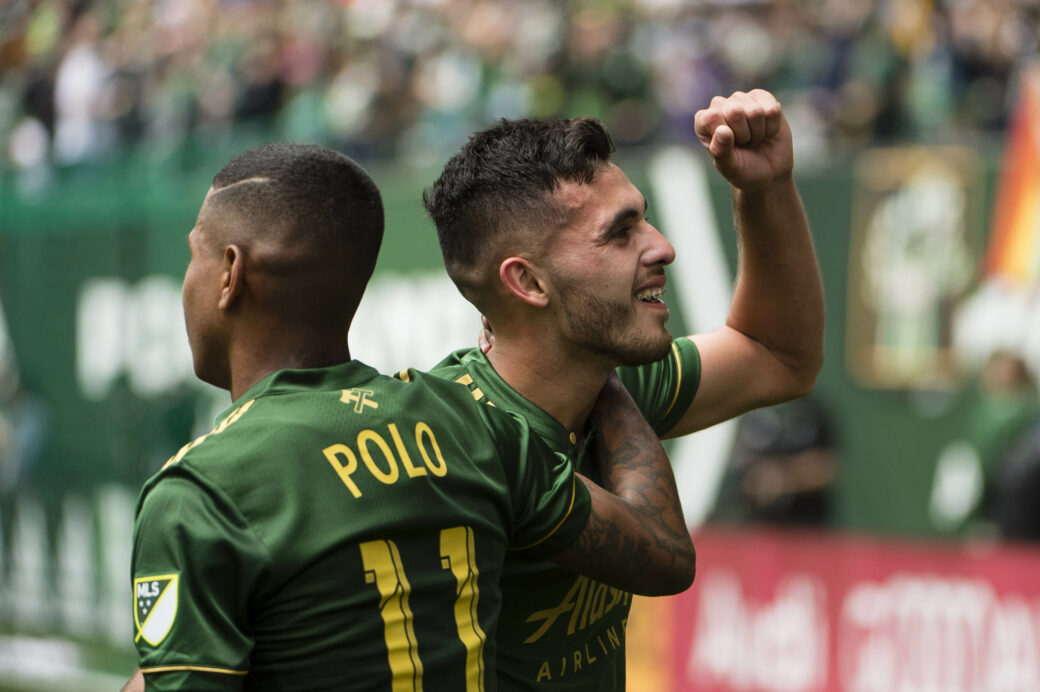 In a clash of two of the West’s top dogs, the Portland Timbers emerged victorious over LAFC in the match of the day in Saturday MLS action.

The Timbers earned a 2-1 win over the expansion side on Saturday at Providence Park, picking up their fifth straight win.

NYCFC kicked off the day by demolishing the Colorado Rapids, 4-0, at Yankee Stadium on a day David Villa enjoyed, and one Rapids coach Anthony Hudson will want to forget.

The day also saw the Columbus Crew continue to roll, extending their unbeaten fun to six matches by edging the New England Revolution in a close one.

Here’s a look back at Saturday’s MLS action:

The Philadelphia Union put together quite a performance on Saturday.

Following several early saves from goalkeepers on either side, Marcus Epps was able to put one past Nick Rimando to give the Union the 1-0 advantage. Epps’ finish came in the 21st minute, as the 2017 draft pick scored on an assist from Fafa Picault.

The Union’s second was a golazo from Borek Dockal. The recently-signed playmaker’s chipped effort went up and over Nick Rimando to give the Union a 2-0 advantage heading to the halftime whistle.

RSL jumped back into it 65 minutes in, pulling the score back to 2-1. Damir Kreilach’s finish was the second of his MLS career, but that goal only held up for a few minutes before Ilsinho restored the two-goal lead.

Keegan Rosenberry iced the game with a stunner of his own, capping off one of the Union’s best performances in quite some time.

Man of the Match: Borek Dockal was brought in to create goals, and he did just that on Saturday. With a goal, a primary assist and a secondary assist on the day, Dockal put in a good performance.

Moment of the Match: Less than 10 minutes after RSL pulled one back, Ilsinho restored the Union’s cushion.

Match to Forget: Kyle Beckerman looked a step or two slow in a game where RSL was dominated.

It took awhile, but the Columbus Crew finally put together a late goal in a 1-0 win over the New England Revolution.

Columbus rescued the game from a scoreless draw on a 85th minute left side corner kick from Federico Higuain. Center back Lalas Abubakar made a great run in from the edge of the box, eluding his Revs marker, Jalil Anibaba, and getting in front of Wilfried Zahibo to head home the decisive only goal.

Teal Bunbury led the Revolution’s offensive effort in a relatively quiet first half, forcing Crew keeper Zack Steffen into an early save in the second minute and then testing him again from the left edge of the box in the 38th minute.

The Crew were only able to put one of their 11 first half shots on frame, in part thanks to three blocked attempts by right back Andrew Farrell. Federico Higuain had a quality look from near the penalty spot in the ninth minute by sent it over the crossbar.

Revs rookie Brandon Bye had a nice long-distance volley in the 58th minute, and then later on Gyasi Zardes had a breakaway for the Crew in the 75th minute, but he took a bad angle and Matt Turner made the save at the left post.

Crew defender Lalas Abubaker gave the ball away to Cristian Penilla on a back pass in the box in the 80th minute, but Steffen jumped in to quell the danger.

Man of the Match: Abubakar avoided disaster with a giveaway in the box in the 80th minute, but otherwise was able to stifle the Revs offense, while also scoring the only goal.

Moment of the Match: The Crew were probably more deserving of a goal and were able to find it in the closing minutes. The ball in by Higuain was place well and Abubakar caught the defense a bit flat-footed.

Match to Forget: With Diego Fagundez suspended due to yellow card accumulation, Kelyn Rowe filled in as the Revs’ No. 10, but was not particularly inspiring. Brad Friedel ended up subbing him out at halftime for the more defensive-minded Zahibo. Rowe had only 16 touches and completed four of his nine passes.

Late drama was the story in Frisco on Saturday as a late penalty kick helped the Vancouver Whitecaps seal a 2-2 draw with FC Dallas.

Just moments before the halftime whistle, FC Dallas took the lead on a goal from an unlikely source. Fullback Reggie Cannon ripped a shot from the top of the box, finding the top corner in the 40th minute.

Maxi Urruti added a second with 12 minutes remaining. The goal came on a quick counter that included Mauro Diaz, Santiago Mosquera and, ultimately, the goalscorer Urruti.

The Whitecaps did fight back, though, as Maynor Figueroa’s own goal gave the Canadian side a fighting chance in the 82nd minute. In the eighth minute of stoppage time, Jimmy Maurer was called for a foul, giving Kei Kamara a chance to finish from the spot to seal the draw.

Man of the Match: Cannon scored his first goal and put in a standout defensive performance in what should have been an FC Dallas win.

Moment of the Match: With the Whitecaps pushing up for an equalizer, Kei Kamara buried his penalty kick to earn a point.

Match to Forget: Jimmy Maurer was called for a foul on Anthony Blondell late in stoppage time to allow the Whitecaps a second late goal.

Both the Portland Timbers and LAFC have the talent to provide goals, and they did just that in the second half. When all was said and done, though, it was the Timbers who earned the three points in a 2-1 win.

The first half was somewhat lively, but neither team could find the goal needed to pull away. The best chance came late for LAFC, as a pair of close-range chances were blocked away in a mad scramble just outside the six-yard box.

A mistake early in the second half did give the Timbers the game’s opener. On a Diego Valeri free kick, Tyler Miller parried the free kick right into the path of Cristhian Paredes. The Timbers midfielder was left with a simple finish to snag the lead int he 52nd minute.

Carlos Vela scored a stunner to tie it up, looping a Goal of the Week contender up and over Jeff Attinella. On the edge of the box, Vela lifted a shot up and over the goalkeeper and into the far post, leveling the match at one apiece.

The deadlock didn’t last long, though. Samuel Armenteros finished following an LAFC chance on the other side, rifling a shot past Miller to push the Timbers ahead, 2-1.

Man of the Match: His play was quiet as always, but Diego Chara bossed the midfield in the Timbers’ win.

Moment of the Match: Armentero’s goal was as pretty as it was important. The finish was a great response to Vela’s stunner, which will be remembered later in the week during Goal of the Week discussions.

Match to Forget: Diego Rossi was held unusually quiet for LAFC in a match where the attack didn’t quite click.

NYCFC’s clash with the Colorado Rapids was about as straightforward as one would expect as an exceptional David Villa performance led the way in a 4-0 rout at Yankee Stadium.

On a day that saw him honored pre-match, Villa scored two goals including, the opener in the 22nd minute. Villa’s finish was a simple curler set up by Maxi Moralez, as Tim Howard stood no chance as NYCFC took the first half lead.

Early on in the second half, NYCFC pushed it to 2-0 through Ronald Matarrita. The Costa Rican fullback’s goal was a headed finish following a Jo Inge Berget shot.

The lead soon became 3-0 on a goal from Maxi Moralez, who finished off an assist from a fouled Villa to all but seal the three points. Villa scored his second in the 74th, furthering the lopsided scoreline to 4-0. The goal was Villa’s seventh of the season.

Man of the Match: There’s no doubt. Saturday was a day for Villa, who finished with two goals and an assist in the straightforward win.

Moment of the Match: Although the match finished as a blowout, the first half was tighter than many would expect. Matarrita’s goal ended the Rapids’ hopes, though, while changing the tone of the match.

Match to Forget: Pretty much every Rapids starter can be lumped into this category, but Howard, in particular, had a tough game in goal in a match where he needed to be on.

D.C. United drew first blood in the 15th minute when Logan Stieber ran onto a long pass from Luciano Acosta and slipped behind the Earthquakes defense before beating Andrew Tarbell for the opener.

Darren Mattocks made it 2-0 just four minutes after Luciano Acosta picked off a San Jose pass in the Earthquakes half of the field and raced in on goal before feeding Mattocks for the finish.

Yamil Asad made it 3-0 in the 37th minute off another Earthquakes turnover in midfield. Paul Arriola grabbed a loose ball and slipped the ball to Asad, who finished well.

The Earthquakes pulled one back just before halftime when Danny Hoesen collected his own saved shot and finished past Steve Clark to make the score 3-1 in the 43rd minute.

That’s as close as the Earthquakes were able to get, suffering a home defeat to halt a modest two-match unbeaten run, while giving D.C. its first road win of the season.

Man of the Match: Luciano Acosta’s excellent assists set up the first two D.C. goals and set the tone for an impressive win.

Moment of the Match: Acosta’s long pass to catch Logan Stieber in stride was perfect, and Stieber finished his chance perfectly.

Match to Forget: Jackson Yuiell never could find the match, and could have done better on the turnover that led to D.C. United’s second goal. It was his turnover that sparked the third D.C. goal.