Sebastian Saucedo steps up for RSL with confidence-boosting stunner 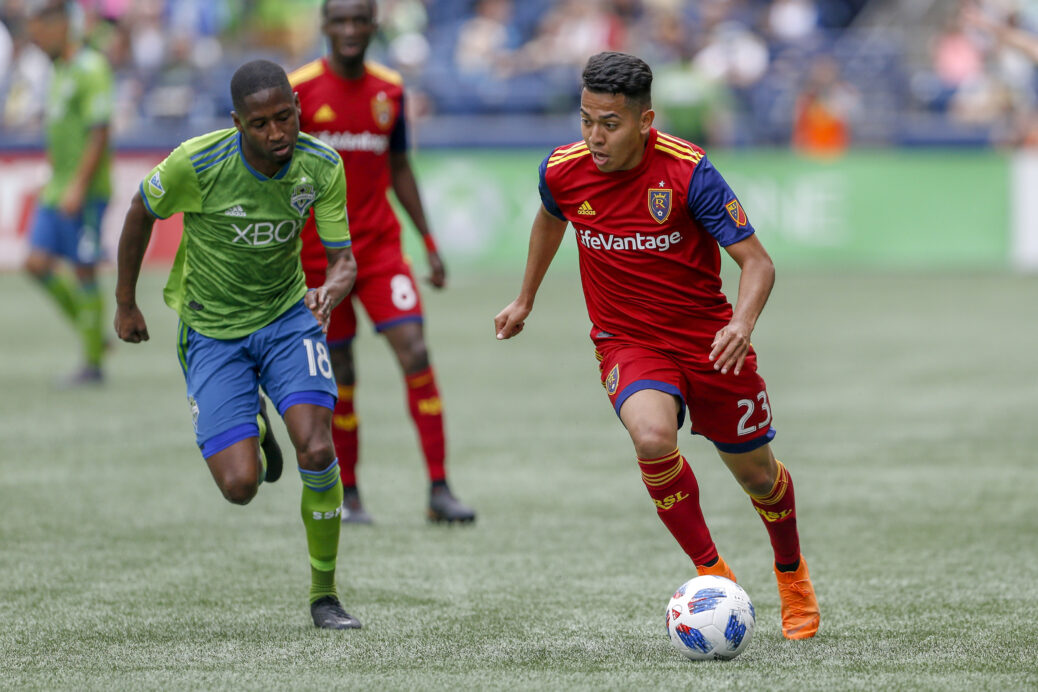 SEATTLE – For 60 minutes Saturday at CenturyLink Field, there had been a  more yellow cards than shots and no real chances between the Seattle Sounders and Real Salt Lake.

Something had to be created. Set pieces weren’t very dangerous for either team all afternoon long. But in the 61st minute, a stroke of wizardry seemingly came out of nowhere from RSL forward Sebastian Saucedo.

Saucedo, or his nickname ‘Bofo,’ came in from the left flank and, on his right foot, curled a shot over the hand of Sounders goalkeeper Stefan Frei. That was the lone goal in a 1-0 road result for Real Salt Lake in Seattle.

“It’s a matter of getting an opportunity and doing it in a game,” Saucedo said. “We were in Philly and my shots were all over the crossbar. This one was on target and finally went in.”

It was Saucedo’s first of his MLS career and it couldn’t have come at a better time. The shot seemingly floated through the air and may have even gone off the fingertip of Frei. It found the back of the net nonetheless.

Salt Lake head coach Mike Petke said Saucedo takes that shot five or six times per week in practice. He finally did it in a game and it paid off.

“That’s what I want: to score goals as a forward,” Saucedo said. “I think any other forward wants that, is to score a goal, score many goals in their careers. I’m hoping to be in the right path to do that and for my team to be successful as well.”

Saucedo, 21, grew up in San Fernando Valley, California and had yet to make a big impact for the club that signed him as a homegrown player in 2014. He made his debut in 2015 where he played nine matches. In 2016, Saucedo was loaned to Veracruz in Liga MX and scored his first professional goal before coming back to RSL in 2017 and playing in 20 matches.

Still, he had yet to find the back of the net in MLS. Thus far in 2018, Saucedo has been a bit more of a regular. He’s played in eight matches, got his second start Saturday and finally got that first MLS goal. You knew it was his first time when he said he didn’t even know what to do after it went in.

“I didn’t know how to celebrate,” Saucedo said. “It was an incredible feeling for myself, and obviously my family.”

Confidence for a forward can be crucial. For a player like Saucedo who gets rotated in and out of the lineup, this could be a turning point for him. He said it will give him confidence moving forward.

Above all, he just wants the opportunity to get back out on the pitch and try it again.

“It’s a goal and I’m looking forward to playing in another match and trying to do the same thing or an assist or whatever it takes to help my team,” Saucedo said.

Saturday wasn’t just Saucedo’s first MLS goal, but it was also RSL’s first road win of the season. Saucedo said he wanted to do whatever it took to win Saturday’s match and the team just flat out wants to be successful. It being in front of 39,508 people may have made that task a bit more difficult, but Bofo silenced them.

“It was a beautiful strike,” Petke said. “It’s about time he did it in a game. He has that quality. The confidence that he showed in front of this many people in a stadium like this – I’m proud of him.”