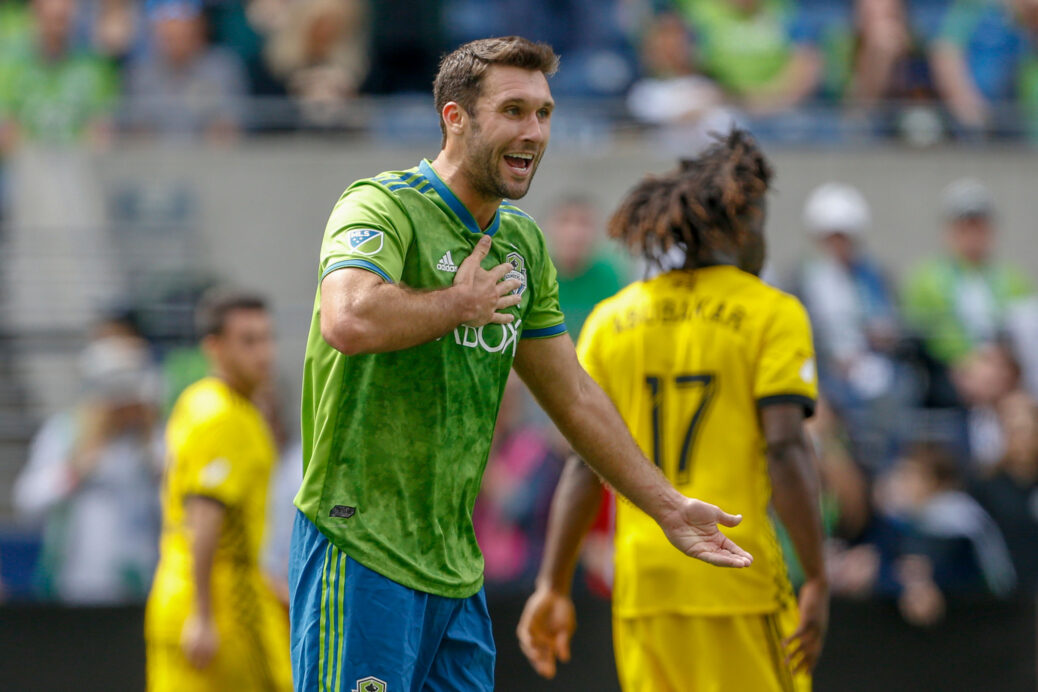 SEATTLE – The Seattle Sounders were playing at home, in front of nearly 40,000 fans at CenturyLink Field, a building that has long been a house of horrors for visiting teams. They enjoyed a man advantage over the Columbus Crew for a whopping 75 minutes of soccer. And with just a single win from their first six games (1-4-1), they needed a full three points about as badly as an MLS team with any ambition can need a win in early May.

And yet they managed but one shot on goal all match, settling for a scoreless Saturday afternoon draw that drew a smattering of boos at its conclusion. They looked predictable throughout, and enjoyed almost nothing that Columbus Crew head coach Gregg Berhalter did not happily concede.

If anything, the best chances of the day went to Gyasi Zardes and the compact 10-man Crew, patient on defense, opportunistic in attack, disciplined in both. If anything, the Sounders were lucky to escape with a point at all.

“We’re disappointed in the result,” said Sounders head coach Brian Schmetzer after the match. “It’s not good enough. I’ll make sure that we watch this tape and we work on attacking movements to try and break that final line and be a little more creative. We moved the ball too slow. The few times when they did get into our end of the field, and we won possession of the ball, we need to sprint. We need to get down the field before they get a chance to get bunkered in.”

A visibly frustrated Will Bruin was even more blunt in the locker room.

“We were too slow,” he said. “We were too slow. We were too predictable. We didn’t even try to play through the final third. I think everybody in the stadium knew we were gonna get it and try to push it wide and try to cross it, you know? You gotta find other ways to create chances, and we just haven’t been able to do it.”

Referee Hilario Grajeda issued a straight red card to Pedro Santos in the 15th minute. After swinging for a 50-50 ball, Santos followed through, kicking Alex Roldan in the chest before his cleats clipped the rookie’s chin.

Berhalter switched to a five-man back line 15 minutes later, swapping centerback Alex Crognale for midfielder Cristian Martinez. With two or three midfielders sitting just above the defense, the Crew pushed everything wide and forced the Sounders into long shots and even longer crosses.

The Sounders’ best three looks in the first half came from at least 19 yards out, and all sailed over the crossbar. They dumped in 34 crosses on the afternoon, many of them of the from-Spokane variety. There were few angled passes, only one through ball behind the back line, scant one-two combinations, squadoosh over the top.

“We gotta be willing to take chances,” Bruin said. “We gotta get some creativity, some flair. We gotta move the ball quicker. We gotta pass and move. We gotta try things. I think we’re too caught up with playing the simple pass: ‘I’m not going to make the mistake, I’m just gonna move it to the next guy.’ You’re not going to score like that.”

The Sounders have now managed just five goals from seven league matches. Set aside a 3-1 victory over Minnesota United, and they have been outscored by a combined score of 8-2 in the other six games.

They did finally force goalkeeper Zack Steffen into a save in the 73rd minute, when halftime substitute Handwalla Bwana found Bruin charging down the left side of the penalty area. Bruin tracked down the pass near the end line and found Clint Dempsey at the edge of the keeper’s box, but Steffen dropped low to snuff out Dempsey’s first-timed shot.

“It’s particularly frustrating,” said Schmetzer when asked about managing just a single shot on goal. “I think we’re better than that. I think that the fact that we had to resort to just humping 34 balls into the box from wide channels is not indicative of the play that we’re capable of. So, again…we’re going to try and fix it.”

To be sure, injuries played a factor. The club clearly misses speedy striker Jordan Morris, out for the season with a torn anterior cruciate ligament. Primary playmaker and Designated Player Nicolas Lodeiro was also absent from the lineup with an unspecified foot injury. (He did not appear on the league’s injury report prior to the match.)

“We certainly miss Nico,” said Schmetzer, “but I think we had enough players out there that are capable of breaking lines. It’s just a question of do we have the quality, do we have the ideas, to make sure that they come to fruition. The best chance that we had–when Clint had our shot on goal–was because Will Bruin was the one that was breaking the line, and he got in behind. And those are the types of movement that we need more often.”

For his part, a relatively upbeat Cristian Roldan was quick to applaud the opposition.

“They had a game plan,” said the fourth-year midfielder. “Going down to 10 men, they knew exactly what they were going to do. They hit us on the counter three, four times. [We were] fortunate not to go down 2-0, 3-0.  Overall, I thought they were extremely well organized. They were very good. Berhalter does an extremely, extremely good job with positioning, and spacing, and at the end of the day, discipline. Discipline got them the draw, and they could have won that game.”

The Sounders enjoy precious little time to figure out how to end their early-season woes. Saturday’s draw was the first of three matches in just eight days, with difficult road tilts against two rivals — Toronto FC and the Portland Timbers — scheduled for Wednesday and next weekend.