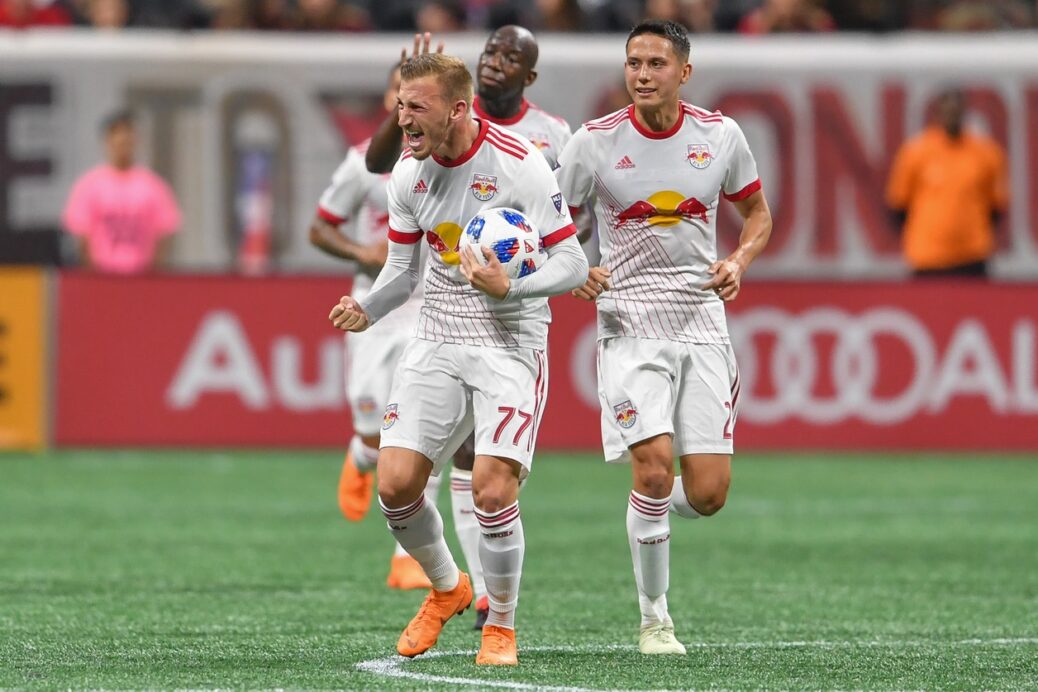 Matchday 12 in Major League Soccer got underway with Minnesota United earning a point at home in a 1-1 draw with Western Conference leaders, Sporting KC.

At Toyota Park, the Houston Dynamo received a second-half brace from Honduran international Alberth Elis to down the Chicago Fire 3-2. A quick succession of goals by Chicago had them up 2-1 at halftime, but Elis put his team on his back and carried them to their first road win of the season.

In the evening fixture, the New York Red Bulls made a huge statement in Atlanta defeating the Five Stripes 3-1 away from home. Bradley Wright-Phillips led the way with a brace.

Here’s a closer look at all of Sunday’s MLS action:

It was a fast paced second half, but Sporting Kansas City and Minnesota United were unable to find a winner in the final minutes and they each share a point with a 1-1 draw.

Khiry Shelton opened the scoring after only eight minutes for SKC, but his opener was canceled by a persistent finish from Darwin Quintero.

The Loons thought they were ahead after only six minutes when a Darwin Quintero cross looked to pick out Christian Ramirez for a tap in, but the offside flag went up on a razor-thin margin to cancel it out. Just two minutes later, SKC went ahead. Khiry Shelton rose high to get a strong head to a Johnny Russell corner for the opening goal.

The Loons managed to hit back before too long, though. Just after the 19 minute mark it was Miguel Ibarra picking out Quintero in the penalty are for an equalizer. Quintero’s thumping header was initially stopped by Tim Melia, but he spilled the rebound and Quintero was on the doorstep to knock it in the net.

That would sum up the scoring, although the pace was quick in the second half, with most of the chances heading to the visitors. Their best came in the 77th minute, when Graham Zusi clanked a short range shot off the post after a nice setup from Daniel Salloi.

Man of the Match: Bobby Shuttleworth made some big saves to keep SKC out of the net late in the game. He stopped eight Kansas City shots overall as he earned his side a point at home.

Moment of the Match: Quintero’s goal was a real moment of weakness for SKC and kept them from getting all three points against a defensive-minded Minnesota United team.

Match to Forget: Tim Melia will look back on this match and think he could have done more to preserve the lead in the first half. His spill that lead to the Quintero goal really should have been held onto.

The Houston Dynamo claimed their first road win of 2018, hanging on for a 3-2 victory over the Chicago Fire at Toyota Park.

Alberth Elis led the way for Houston with a second-half brace. Elis sealed the win for the Dynamo in the 64th minute, thanks to a right-footed finish following a fast break.

The Fire led 2-1 after Nemanja Nikolic and Diego Campos scored two minutes apart to cancel out an early goal by Houston’s Romell Quioto.

Elis’ first goal of the afternoon came in the 56th minute as he scored from the penalty spot. Richard Sanchez bundled Mauro Manotas in the box and gave referee Silviu Petrescu a clear reason to blow the whistle.

Chicago only had five shots in total, ultimately losing their third match in the month of May.  They next travel to Orlando City on May 26th.

Houston are unbeaten in their last three matches, and next host NYCFC on May 25th.

Man of the Match: Alberth Elis carried his team to a huge road win, scoring a pair of goals in the second half. The Honduran now has six goals and four assists in 10 appearances this season.

Moment of the Match: After taking the 3-2 lead, Chicago really pushed for an equalizer but their effort came up short. Alan Gordon was saved in stoppage time by Joe Willis before Nikolic missed a pair of efforts.

Match to Forget: Sanchez made a huge mistake conceding the penalty in the second-half which allowed Houston to the the match. Later, Sanchez would be beaten by Elis a second time which lost Chicago the match.

After going down early, the New York Red Bulls used a second-half brace from Bradley Wright-Phillips to down Atlanta United 3-1 at Mercedes Benz Stadium.

Ezequiel Barco smashed home from the center of the box past Red Bulls keeper Ryan Meara in the 26th minute to give Atlanta a 1-0 lead. It looked like the forward was offsides, but the goal stood as Barco now has three goals this season.

Meara came up big in the 20th minute repelling Miguel Almiron’s left-footed effort wide for a corner. A nice run by the Paraguayan had him 1-on-1 with the 27-year-old but he was unable to beat him to the bottom-left corner.

Meara came up big again in the 24th minute as he stoned Josef Martinez on a break away. Martinez looked to have doubled Atlanta’s lead in the 32nd minute, but he was whistled for a foul on Aaron Long after pushing the defender and scoring on a breakaway.

The Red Bulls leveled the score in the 41st minute as Royer chipped the PK down the middle of the goal. Bradley Wright-Phillips was tugged down by Atlanta centerback Miles Robinson which gave the visitors the spot kick.

The Red Bulls took the lead in the 51st minute as Wright-Phillips headed Michael Murillo’s cross past Guzan. The 33-year-old has seven goals this season.

Wright-Phillips added his second of the match in the 53rd minute after heading Kaku’s cross in off of the bar and past Guzan.

Greg Garza saw a straight red later in the second half which reduced the hosts to 10-men. A scary moment occurred as Kemar Lawrence laid motionless after landing awkwardly trying to clear a cross.

Lawrence was stretchered off and replaced by Connor Lade, while Tyler Adams also left with an apparant knee injury.

At the final whistle, the Red Bulls claimed their third consecutive road win.

Man of the Match: Bradley Wright-Phillips continued his strong season, leading the NYRB with a brace. He now has eight goals on the season and helped set up their opening goal as well.

Moment of the Match: After BWP snatched the lead for the visitors, he continued his strong form by icing the match with his second of the match.

Match to Forget: Greg Garza set his team back with the red card which really killed their chances at a comeback.