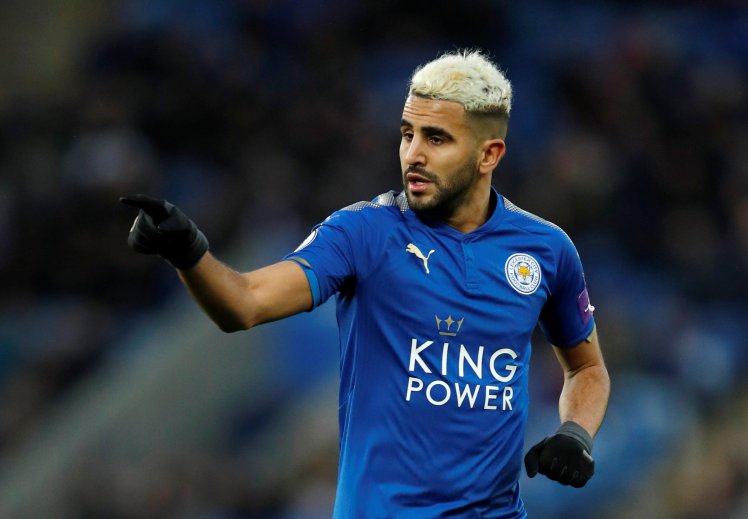 The English Premier League champions are closing in on a pair of signings to bolster their squad even more.

According to ESPN, Manchester City are close to signing both Leicester City’s Riyad Mahrez and Napoli’s Jorginho with both moves possibly being completed by the end of next week.

Mahrez has been on Man City’s wishlist for some time now, with Leicester rejecting a £65 million plus a player deal from the Citizens in January. The Algerian handed in a transfer request in January, but was not moved from the club.

The 27-year-old was the PFA Player of the Year in 2015-16 as Leicester were crowned league champions. He currently is under contract with Leicester until the summer of 2020.

Jorginho, 26, scored against Manchester City in last season’s Champions League and has been with Napoli since January 2014.

The Italian international moved to the club for free from Hellas Verona, and made 37 appearances in all competitions for Napoli in 2017-18.

Jorginho has already agreed personal terms with City, as the teams work on a compromise around the £48 million range.

Jamaican speedster Usain Bolt is currently training with Norweigan side Stromsgodset in hopes to becoming a professional footballer.

The 31-year-old won eight Olympic gold medals during his sprinting career, and was recently training with the team in Drammen. Bolt hopes to play in an upcoming friendly against the team’s U-19 side.

“I want to try to get better, to work as hard as I can, play as much as I can. Maybe a club will see something and decide to give me a chance,” said Bolt, who retired from athletics last year.

Bolt also trained with Borussia Dortmund back in March and featured in special editions of Pro Evolution Soccer 2018. He has been wearing the shirt number 9.58 for his world record time in the 100 meters.

Salah suffered sprained ligaments in his shoulder during last weekend’s 3-1 defeat to Real Madrid in the UEFA Champions League final.

The Egyptian Football Federation is optimistic that Salah will be ready for their showdown with Uruguay on June 15th, despite Liverpool boss Jurgen Klopp describing the injury as “really serious.”

“No one is happy when a colleague suffers an injury, especially when it happens in a match as it did, just before a World Cup,” Suarez told a news conference.

“Salah is in a difficult situation, but I’ve consistently said I always want to play against the best to demonstrate that Uruguay are better.”

Salah traveled to Spain on Wednesday to receive treatment, but the timetable for bis return is uncertain.

PSG star Neymar was left out of Brazil’s main team Thursday at their World Cup training camp, according to ESPN.

Following a week of training with the National Team in Brazil last week, the winger said he has recovered yet from a foot injury suffered with PSG earlier this season.

It is unclear if Neymar will start in Brazil’s upcoming friendly against Croatia on Sunday in Liverpool. Brazilian coach Tite used Philippe Coutinho and Gabriel Jesus as an attacking pair during Thursday’s training session, while Thiago Silva took the place of Marquinhos.

Brazil’s final friendly will take place on June 10th against Austria before kicking off World Cup action against Switzerland on June 17.