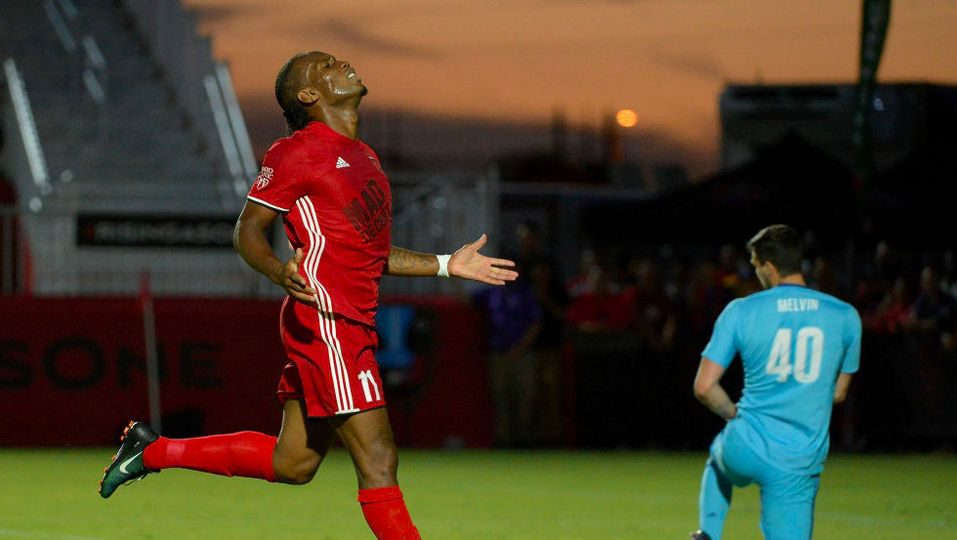 It was a busy weekend throughout the USL, but a Didier Drogba moment of magic headlined the action.

Here’s a closer look at this past weekend’s USL action:

Tommy Heinemann’s two goals in the second half ensured Penn FC (1-2-4) their first win of the season. Heinemann struck twice in three minutes to put the game out of reach against a Rowdies (4-4-0) side that has been struggling with consistency.

Kyle Venter opened the scoring for Penn FC in the 11th minute, and stout defending kept the home side in charge. Penn FC move up to 13th place while the Rowdies fall down to 7th in the eastern conference.

The Monarchs (5-1-1) handed OCSC (5-3-1) their second loss in three matches on a late winner from Juan Mare. Maikel Chang opened the scoring for the Monarchs in the 7th minute before Aodhan Quinn leveled the match from the penalty spot just before halftime.

The match looked destined to be a draw when the Monarchs were reduced to 10 men in the final minutes of the match when midfielder Charlie Adams was sent off. The man advantage did not factor into the final result, as Juan Mare struck the winner for the Monarchs in the 90+1 minute. OCSC and the Monarchs are no level on points with 16 a piece, while the former holds the goal differential tie-breaker.

Didier Drogba provided some late magic in this western shootout. Los Dos (0-5-3) looked like they were on their way to their first win of the season, scoring three times in the first half to take a 3-1 lead with goals from Efrain Alvarez, Ulysses Llanez Jr., and Hugo Arellano. Phoenix Rising (4-1-3) would flip the script in the second half, scoring three unanswered goals to complete the comeback.

LCFC (5-1-1) are unbeaten no more thanks to a tightly contested match that saw Indy Eleven (4-2-1) win on a second half penalty kick. A handball on Paco Craig created the chance for Indy Eleven, and Ayoze perfectly placed penalty beat Greg Ranjitsingh for the only goal of the match.

The loss drops LCFC into second place in the eastern conference while Indy Eleven move up to sixth place.

The Riverhounds (4-0-3) are now the only unbeaten team in the USL thanks to another strong performance by Neco Brett and a league best defense. Brett added a goal and an assist to his season tally, opening the scoring in the 13th minute, and assisting Kevin Kerr in the 36th minute. TFC II (0-5-2) managed to pull one back in stoppage time from Shaan Hundal, but the struggling side could muster nothing more.

Atualla Guerra scored the game winning goal in the Battery’s (4-2-2) third straight victory. The Independence (2-3-2) are now winless in their last five matches. Victor Mansaray helped put the game to bed in the 87th minute after the Independence were reduced to 10 men following a Henry Kalundi red card.

FCC (5-1-2) jumped into the top spot in the eastern conference with a big win over struggling ATL 2 (1-3-3). FCC struck three times in the first, leaving ATL 2 reeling. Goals from Danni Konig, Corben Bone, and Emmanuel Ledesma proved to be too much for the visitors.

ATL 2 striker Jon Gallagher scored for the visitors, giving him his fourth of the season, Larent Kissidou added a second just before halftime, bringing the match to a one goal deficit for ATL 2, but Ledesma added a second for FCC just after halftime to make sure the game stayed in hand.

Moise Pouaty stood tall for struggling Switchbacks, but the home side couldn’t find the net. The Switchbacks (3-5-2) are winless in their last four matches, and 1868 FC (2-3-3) are still trying to climb out of the hole they dug themselves in the early goings. The Switchbacks held 1868 FC to zero shots on target on the night.

The Rangers (4-1-3) squeaked past OKC Energy (1-7-0) on the strength of a late penalty kick from Hadji Barry. Richard Dixon’s handball in the box in the 86th minute erased the possibility of a point for the home side. OKC Energy have now lost seven straight.

STLFC (3-1-4) are not turning a lot of heads, but they are getting the job done. Their draw with the Timbers 2 (4-3-2) extends their unbeaten streak to six matches, and has them sitting in seventh place in the western conference. The Timbers 2 are also having a good season in 2018, themselves only losing once in their last five matches.

The Foxes (2-2-5) undefeated streak came to an end as SAFC (3-2-3) won their second straight match to move up to eighth in the western conference. Alex Bruce scored in the 20th minute before Jemal Johnson leveled the match for the visitors. An bizarre own goal from Kyle Reynish won it for the home side. A shot from 30 yards from goal bounced off the post and struck Reynish in the back before rolling into the goal.

The Lights (2-1-4) are officially struggling after failing to win at home in their last three matches. Things started well enough for the Lights, going ahead in the 15th minute on a goal from Carlos Alvarez, but the Roughnecks (0-3-4) leveled the match in the 44th minute thanks to Joaquin Rivas. The Roughnecks would later gain a man advantage thanks to a red card to Matt Thomas, but they failed to make it count.

NSC (2-2-3) will come away from this one feeling hard done. NYRB II (3-1-5) kept the match level, but gave up numerous chances in the second half that only stout defending and good goalkeeping from Evan Louro stopped from getting out of hand. NSC scored first on a bad give away from Jordan Scarlett in the 7th minute, but NYRB II equalized through Vincent Bezecourt twenty minutes later. Neither team could grab the winner, and the teams split the points.

Sac Republic (5-1-3) moved into the top spot in the western conference, atoning for their midweek loss to the Timbers 2 by seeing off the Sounders FC 2 (2-5-1) on the road. Mitchell Taintor gave Sac Republic the lead heading into halftime, but Felix Checkam brought the game level in the 61st minute. Bryan Meredith suffered a similar own goal as Kyle Reynish, having the ball deflect into the goal off of his back on a shot by Vilyan Bijev.

The Steel (2-3-2) won their second match of the season against the only team they have beaten so far in 2018. The Kickers (2-4-1) had no answers for the Steel offense yet again, as the match became lopsided. Despite taking the early lead through Heviel Cordoves, the Kickers could not hold onto the lead, conceding goals to Matt Real in the 29th minute, Santi Moar in the 68th minute, and Chris Nanco from the penalty spot in the 83rd minute.