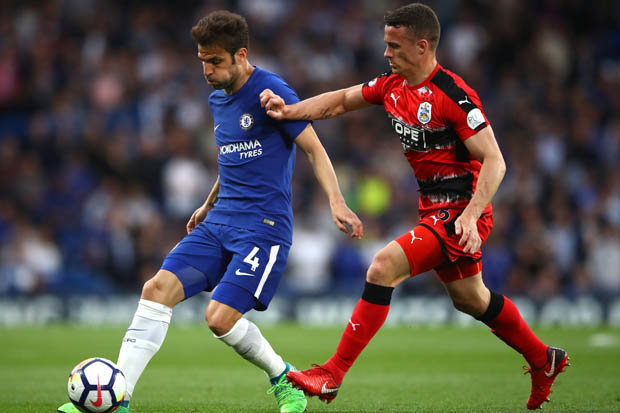 Huddersfield Town had it all to do at Stamford Bridge, knowing a point against Chelsea would guarantee them Premier League survival. A goal by Laurent Depoitre paired with some strong defending at the back gave David Wagner’s men a 1-1 draw on Wednesday. Depoitre’s opener came in the 50th minute for the Terriers after a miscommunication by Antonio Rudiger allowed the striker to pounce for his fifth goal of the season. Marcos Alonso answered for the Blues in the 62nd minute after he headed into the bottom-right corner. Jonas Lossi’s biggest save of his four on the evening came in the 83rd minute when he got a hand to Andreas Christensen’s header. Despite only 22% possession, Huddersfield got the point and they needed and celebrated with the visiting fans at the final whistle. It was the third time ever in Premier League history that all three of the newly promoted clubs guaranteed safety in the same season. Chelsea’s hopes of the top four will come down to the final day.

Elsewhere in Europe, Barcelona rolled past Villarreal in La Liga play while Sevilla hosted Real Madrid. Leicester handed Arsene Wenger a lopsided defeat in his penultimate match in charge of Arsenal. Juventus faced AC Milan in the Coppa Italia Final at the Olimpico in Rome.

Here’s all of Wednesday’s European results:

Arsenal’s 22-match league unbeaten run against Leicester ended on Wednesday with the Foxes beating the Gunners 3-1 at home. Kelechi Iheanacho’s composed finish gave Leicester a 1-0 lead in the 14th minute, before the Gunners saw themselves reduced to 10-men. Konstantinos Mavropanos saw a straight red for taking down Iheanacho on a breakaway attempt. Pierre-Emerick Aubameyang leveled the score in the 53rd minute before Claude Puel’s side took over the match. Jamie Vardy’s penalty kick goal in the 76th minute regained the Foxes advantage before Riyad Mahrez slammed the door shut in stoppage time. Arsenal stay in sixth place while Leicester are in ninth.

Here’s all of Wednesday’s EPL results:

Barcelona extended their unbeaten run to six matches following their 5-1 beatdown of Villarreal on Wednesday. Ousmane Dembele added a brace late, while three other players got on the scoresheet. Philippe Coutinho’s opener came in the 11th minute for Barca who scored from close range. Paulinho slotted in the hosts second of the match, also scoring from an easy finish in the 16th minute. Lionel Messi scored his 34th league goal of the season, giving Barca a 3-0 halftime lead. Nicolas Sansone pulled one back for Villarreal in the 54th minute, but it would be the closest the visitors would get. Ousmane Dembele netted a pair of goals in the final six minutes, to cap the final score at 5-1 at the Camp Nou. His first was composed as he slotted in Ivan Rakitic’s assist, before adding a second on a fast break in stoppage time. Villarreal are in sixth place with the defeat.

Juventus grabbed their first title of the season, rolling past AC Milan 4-0 in the Coppa Italia Final. Despite a scoreless first-half, the Old Lady found the breakthrough in the 56th minute. Medhi Benatia headed in from a corner kick to give Juventus a 1-0 advantage at the Olimpico. Douglas Costa added to the lead in the 61st minute, scoring from long-range past Gianluigi Donnarumma. Another corner kick left Milan open at the back in the 64th minute and Benatia made them pay, scoring his second of the match. An own goal by Milan’s Nikola Kalinic capped the final score at 4-0 which gave them their 13th Coppa Italia crown. Milan suffered their ninth finals loss in the tournament’s history. Juventus will next look to clinch the Serie A title this weekend as they face Roma away from home.