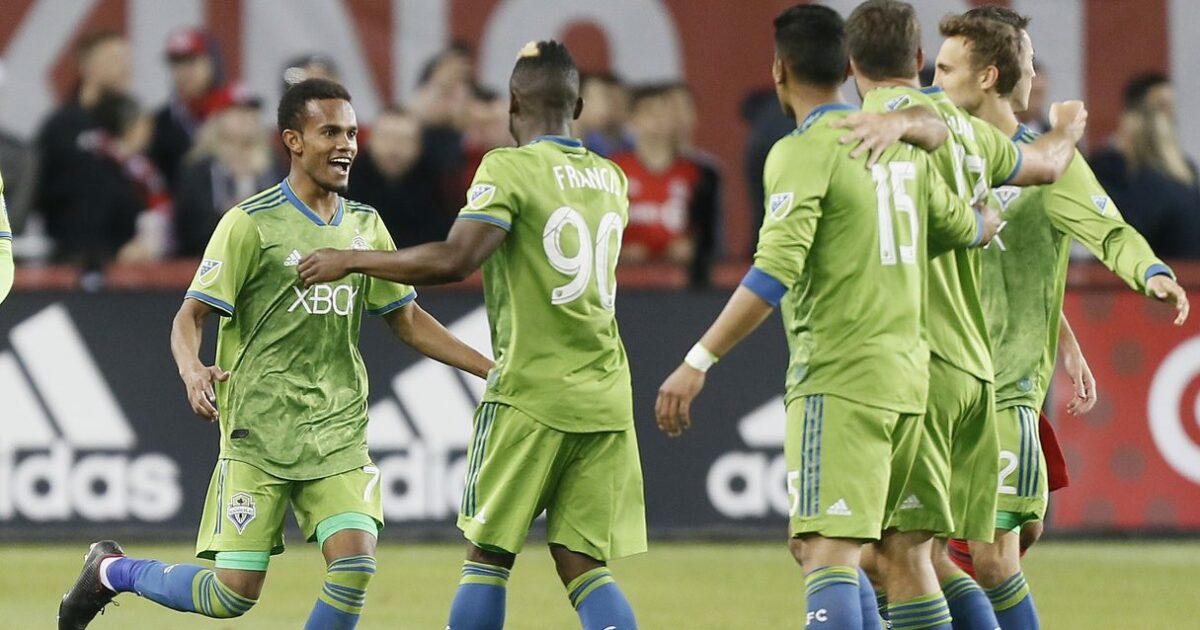 Wednesday’s action in Major League Soccer did not disappoint with some top clashes on display.

In a rematch of last season’s MLS Cup Final, the Seattle Sounders grabbed an important 2-1 victory at Toronto FC thanks to a game-winning goal from homegrown rookie Handwalla Bwana. Will Bruin also grabbed a goal and an assist as Seattle halted their disappointing run of form.

Tim Melia stood on his head for Sporting Kansas City, helping his side to a 2-0 victory over 10-men Atlanta United. Melia made eight saves in his fifth clean sheet of the season, while Brad Guzan was sent off for the Five Stripes.

Elsewhere, the Columbus Crew snatched three points at home against the struggling Philadelphia Union while the Chicago Fire ousted the Montreal Impact. LAFC finished off Minnesota United 2-0 in the final match of the night.

The SBI team will be providing in-game updates and post-game breakdowns of  game, so follow along throughout what will certainly be a busy Wednesday of MLS action. Also, feel free to share your thoughts and opinions on today’s action in the comments section below:

Here is a rundown of Wednesday’s MLS results:

The Seattle Sounders may have been on the losing end the last time at BMO Field, but they certainly didn’t show that on Wednesday. Brian Schmetzer’s side grabbed a huge road win against the defending MLS champs, Toronto FC in a 2-1 triumph.

A fast start by Toronto FC was quieted by the Sounders who took a 1-0 lead in the 25th minute. Will Bruin opened the scoring at BMO Field, finishing comfortably into the top-right corner. It is Bruin’s third goal of the season, and a huge one with Clint Dempsey missing out in the match for Seattle.

However, the hosts continued to pressure through their attack. Sebastian Giovinco rattled the crossbar from a free-kick before setting up Jonathan Osorio for the equalizer. Osorio headed past Stefan Frei in the 40th minute to level the score at 1-1 in the MLS Cup rematch.

Handwalla Bwana regained the lead for Seattle in the 54th minute, scoring his first MLS goal. The 18-year-old homegrown rookie received a through ball from Bruin, and did the rest beating Alex Bono to the center of the goal.

Tosaint Ricketts’ close-range effort in the 94th minute was Toronto’s last chance to grab an equalizer, but Frei saved it comfortably. The 32-year-old made six saves as Seattle grabbed their second win of the season.

Seattle now travels to face the Portland Timbers on Sunday, while Toronto heads to New England on Saturday.

MAN OF THE MATCH: Anytime you can grab your first goal of the season, it’s going to be important. Bwana will certainly remember his as it was the game winner in an important victory for his team.

MOMENT OF THE MATCH: Giovinco struck the crossbar before Toronto found the back of the net, which could’ve made a difference if it went in. Ricketts late chance caused a stir in front of goal, but Seattle stood strong and got the three points they needed.

MATCH TO FORGET: Victor Vazquez grabbed a goal in his last match, but was very quiet in the loss on Wednesday. The Spaniard was subbed off at halftime, making only 27 passes and failing to record a shot on goal.

The match of the night may have come North of the Border but down south Sporting Kansas City grabbed a huge three points against an MLS Cup contender. Peter Vermes’ side defeated 10-men Atlanta United 2-0 at Mercedes Benz Stadium, scoring both goals in the second-half.

Brad Guzan received an early shower, being sent off in the 34th minute. The American goalkeeper raced off his line and lunged into Khiry Shelton just outside of the box. Guzan saw a straight red and was replaced by emergency goalkeeper Paul Christensen.

Daniel Salloi put Peter Vermes’ side ahead 1-0 in the 67th minute, beating Christensen to the bottom-right corner. It was the second consecutive match with a goal for the Hungarian forward.

Tim Melia came up huge with a pair of saves on Kevin Kratz’s free-kicks in the 83rd and 86th minutes respectively. Melia got up to repel Kratz’s first heading for the top-left corner, before diving down to his right and saving the substitute’s second effort. Gerso Fernandes came off the bench and sealed the points for K.C., scoring his first goal in 2018 in the 87th minute.

Melia finished with eight saves, earning his fifth clean sheet of the season. Atlanta had a goal waved off by VAR in the first-half after Josef Martinez was whistled offsides.

Sporting KC are winners of two straight and next travel to Minnesota on May 20th. Atlanta suffered their first home loss of the season and travel to in-form Orlando City on May 13th.

MAN OF THE MATCH: Melia deserved the praise on Wednesday, helping his side continue their strong season with some huge saves. The 31-year-old’s biggest saves came in the final moments as he kept Kratz out twice from free kick attempts.

MOMENT OF THE MATCH: Certainly you would think Kratz would be able to score one past the veteran keeper but Melia had other ideas. After keeping the midfielder out once, Melia did it a second time this time diving low and pushing out Kratz’s free kick. Fernandes sealed the deal with the insurance goal for Kansas City.

MATCH TO FORGET: Brad Guzan will certainly not want to remember his actions on Wednesday, killing his team’s chances of earning anything. The veteran raced off his line and dove into Shelton for a dangerous challenge.

The Columbus Crew snatched their fourth home victory of the 2018 season, defeating the Philadelphia Union 1-0 at Mafpre Stadium. Gyasi Zardes’ tap in finish in the 53rd minute sealed the points for the hosts.

The American forward was left wide open to tap in his sixth goal of the season. Cristian Martinez’s cross was pushed wide by Andre Blake but fell kindly to Zardes who did the rest.

Harrison Afful struck the left post before halftime for Columbus, while Haris Medunjanin’s long-range effort was saved by Zack Steffen earlier in the first-half.

C.J. Sapong had a huge chance to tie it for Philadelphia late, but could not get enough power on Medunjanin’s cross and Steffen gathered cleanly. Mike Grella almost added to the lead before stoppage time, but missed just wide of the left post.

Gregg Berhalter’s men are unbeaten in their last four matches and next host the Chicago Fire on Saturday. The Union have lost their last two matches, being shutout in each. They conclude a three-match roadtrip in Montreal also on Saturday.

MAN OF THE MATCH: Zardes may have come up with the goal, but midfielder Luis Argudo was lively for Columbus. The 22-year-old started ahead of Federico Higuain and did a good job in the Crew’s attacking play.

MOMENT OF THE MATCH: When it looked like Columbus would get an insurance goal, the Union had their best chance to tie the score. A good find from Medunjanin found a limping Sapong in front of goal, but the forward could not muster much on the effort. A better finish and the Union grab a point.

MATCH TO FORGET: David Accam has still yet to record a goal or assist for Philadelphia, and that continued on Wednesday. The Ghanaian was subbed off at the hour mark after failing to create much himself in the defeat.

The Chicago Fire held on for their second home win of 2018, leaving it late against the Montreal Impact in a 1-0 win. Kevin Ellis played the hero for Chicago, scoring the game winner in the 89th minute.

Ellis got on the end of Johan Kappelhof’s assist and beat Evan Bush to the bottom-right corner. It was the defender’s second goal for the club this season.

Montreal had the better of their offensive opportunities in the first-half, by Richard Sanchez kept out Alejandro Silva and Saphir Taider respectively. Aleksandar Katai struck the left post in the 33rd minute for the Fire, while Ellis’ header was kept out by Evan Bush later in the half.

The Fire went for the winner in the second-half, forcing Bush into three saves prior to the winning goal. Veljko Paunovic’s backline did a great job at neutralizing MLS player of the week, Ignacio Piatti who only had one shot total.

Remi Garde’s men have now lost seven matches this season, but return home to face the Philadelphia Union on Saturday. The Fire travel to Mafpre Stadium also on Saturday to face off with the Columbus Crew.

MAN OF THE MATCH: Ellis deserved man of the match honors, scoring the winner in a huge match for the Fire. The defender was in the right place at the right time and finished superbly for the winner.

MOMENT OF THE MATCH: The Fire easily could’ve taken the lead before halftime with Katai striking the post. Evan Bush made some key stops for Montreal which really saved the deficit from being even more than just one.

MATCH TO FORGET: Piatti had a huge performance a week ago but dropped off big time for Montreal on Wednesday. If Remi Garde wants any success this season, Piatti will need to carry the workload with fellow teammates not getting on the scoresheet.

Eduard Atuesta and Mark-Anthony Kaye scored their first MLS goals for LAFC in the first half to give the expansion side a two-goal advantage over Minnesota United at the half.

Atuesta patiently collected a Diego Rossi pass in the middle of the box before finishing past Bobby Shuttleworth to open the scoring in the 31st minute.

Six minutes later, Kaye found himself open in front of goal after Latif Blessing won a header against Francisco Calvo and sent the ball in the direction of the Canadian, who knocked in LAFC’s second from close range.

Bob Bradley’s men attempted to put more pressure on the Minnesota net in the second half, but they weren’t able to add to their tally while silencing the Loons.

MAN OF THE MATCH: Eduard Atuesta was the most active LAFC attacker in the victory, as he challenged Shuttleworth with three shots on target, including the opening goal.

MOMENT OF THE MATCH: Blessing’s fight in the air to set up Kaye for the second LAFC goal handed the expansion side the cushion it needed to hold off the visitors.

MATCH TO FORGET: Francisco Calvo was in bad position on both LAFC goals, and he didn’t do himself any favors by being outjumped by the shorter Blessing on the second strike by the home side.