Who Should the USMNT Start vs. Bolivia?

Since the World Cup qualifying disaster, the U.S. Men’s National Team has continued on the path of a youth movement. A number of new faces have come into the picture in the months since Trinidad & Tobago as the U.S. has evolved in a major way with no World Cup looming.

On Monday, the U.S. looks set to unleash its youngest lineup yet featuring a squad loaded with exciting new faces.

A total of 15 players under the age of 22 make up the USMNT’s roster for Monday’s friendly against Bolivia, giving Dave Sarachan’s squad an even younger feel than the teams that preceded it. Several players seem to be in line for debuts in a squad that doesn’t feature many real regulars of the last qualifying cycle.

While we can expect Christian Pulisic, Matt Miazga, Weston McKennie and Cameron Carter-Vickers to lead the way, several other positions are less clear-cut. With that being said, let’s take a closer look at how the USMNT could line up on Monday: 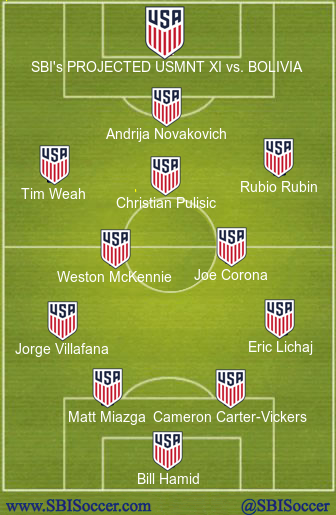 While you can expect a youth-heavy lineup, Sarachan can’t go all out with the youth movement. There needs to be some sort of balance, so expect a few familiar faces to get into the lineup.

Playing the two experienced fullbacks make sense given the complete inexperience of the other two options. Eric Lichaj and Jorge Villafana can hold down the fort in the first half before Matthew Olosunde and Antonee Robinson join the fray in the second half if they’re deemed ready. The two could certainly factor into the European trip as well, so there’s no real rush in getting them into the action if they aren’t ready for the role.

The same can be said for Keaton Parks, even if the team is a little thin in central midfield. Weston McKennie takes on a big role as the defensive presence, and this match should be a good one when it comes to developing the Schalke midfielder as a key leader.  It’s unfortunate Tyler Adams isn’t in the fold, robbing us of the McKennie, Adams, and Pulisic trio, but Joe Corona can step in and provide a familiar presence while we wait for the three to find the field together.

At the forward position, Sarachan has limited choices, but expect him to go with the more experienced of the two. Despite having only one cap to his name, Andrija Novakovich has earned his chance to start following a standout season with Telstar and a strong cameo in his debut. Josh Sargent will get plenty of opportunities, and could be a good substitute in either a straight swap or as part of a two-striker set.

The wings are less clear cut with a number of different options. Rubio Rubin, Timothy Weah, Julian Green, and Lynden Gooch could be called upon to start by Sarachan, and each offers something very different. All four could be a part of the entire three-game set so, even if one or two miss out on Monday, expect them to see some time over the next few weeks.

Overall, expect a relatively young group with experience mixed in. Like the prior friendlies, there’s plenty of room for rotation but, with other matches looming, Sarachan has the ability to give an extended run out to players he feels deserve the chance.