France rolls past Argentina into quarterfinals 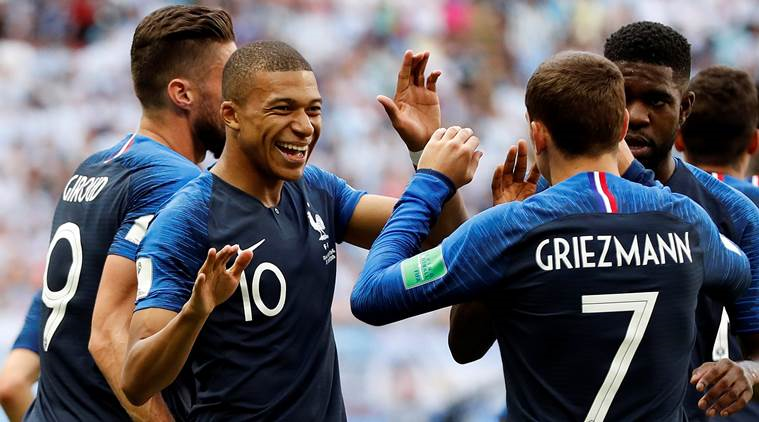 France may have won Group C at the 2018 FIFA World Cup, but they hadn’t displayed the full attacking talent that many knew Les Bleus were capable of.

That switch was flicked on with ease on Saturday as Didier Deschamps’ men used a three-goal second half in an 11-minute span to down Argentina 4-3 in Kazan to advance to the quarterfinals.

PSG star Kylian Mbappe led France with a pair of goals, and he also earned a first-half penalty kick.

The 19-year-old was bundled over in the 11th minute by Argentina defender Marcos Rojo, which led to Antoine Griezmann slotting in the opener.

Angel Di Maria answered in the 41st minute for Argentina, as he ripped a shot from long range into the back of the net. The French backline gave Di Maria the room in the middle of the field and the PSG man beat Hugo Lloris to the top-right corner.

The Albiceleste came out brighter to begin the second half and their pressure was rewarded. Lionel Messi’s left-footed effort following a set piece was redirected into the goal by Gabriel Mercado in the 48th minute to put Argentina ahead 2-1.

Benjamin Pavard’s first senior goal for France couldn’t have come at a better time, as the wing back beat Franco Armani to the top-left corner in the 56th minute. A cross eventually found Pavard outside of the box and the right back sent a missile in to tie the match.

Mbappe picked up a loose ball in the 64th minute and found enough space to beat Armani to snatch the lead for France. The forward added to his impressive day as a great flick-on by Olivier Giroud allowed Mbappe to beat Armani again in the 68th minute.

Sergio Aguero headed in his second goal of the tournament in stoppage time, but it wasn’t enough as France held on for the victory.

France will play the winner of Uruguay/Portugal in the quarterfinals on Friday.

Mbappe was up for the match, as he led the way with a brace and a penalty won for his team. Argentina’s veteran backline could not deal with the Frenchman’s pace as he helped his side to a place in the quarterfinals.

Pavard’s deadly strike leveled the match but Mbappe’s first goal switched the match into France’s favor. Eventually the PSG man would add to his tally and ice the scoreline for Les Bleus.

Marcos Rojo played the hero for Argentina in their last match but was a shear memory of that on Saturday. The Manchester United man conceded the opening penalty and was later replaced by Roma’s Federico Fazio at halftime.