MLS Week 14: A Weekend Look Ahead 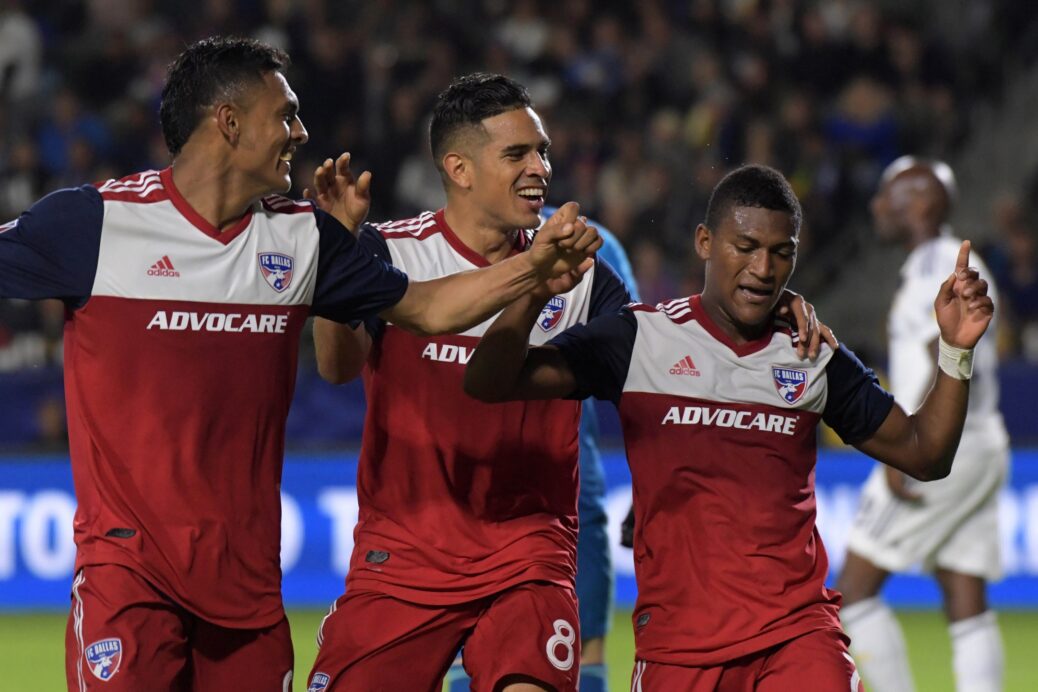 We haven’t reached the dog days of summer yet, but for some Major League Soccer teams their recent schedules feel as grueling as dealing with 95 degree heat for two months straight.

Midweek games in either league play or the Open Cup are testing the depth of certain sides before the World Cup break hits next weekend.

Multiple screens are a requirement Saturday night, as seven games kick off within an hour of each other.

Bookending the Saturday clashes are a pair of Western Conference matchups that shake up the standings a bit.

After traveling to Carson to play the Galaxy on Wednesday, FC Dallas returns home to face the other Los Angeles team at Toyota Stadium.

Oscar Pareja’s team stole a point from Banc of California Stadium on May 5, as Maxi Urruti’s 55th-minute equalizer neutralized the match after an early strike from Steven Beitashour.

Two points back of Sporting Kansas City in the Western Conference standings, FC Dallas has one loss this season and could easily continue its surge against a LAFC team with one win in its last five games.

Since the home draw with FC Dallas, Bob Bradley’s men have struggled a bit with their only win coming against Minnesota United.

It’s once again time for everyone to catch Trillium Cup fever.

Columbus won the first installment of the “rivalry” with Toronto FC in Week 1, and the Crew enter Saturday in much better form than the Reds.

Gregg Berhalter’s team responded to a three-game losing streak by earning 15 points out of possible 21 in the last seven contests, including wins over New England and Chicago.

Toronto enters with losses in three of its last four games, and has three more games to right its course before an 11-day World Cup layoff.

Two of the oldest clubs in MLS fared well in the first three months of the 2018 campaign, as the New York Red Bulls and New England Revolution both sit in the top six of the Eastern Conference.

Saturday could be the perfect time for the Revs to bounce back from a 1-1 home draw with Atlanta on Wednesday since the Red Bulls will be missing Tim Parker, Tyler Adams, Fidel Escobar and Michael Murillo

The East showdown at Gillette Stadium also features a showdown of top scorers, as Bradley Wright-Phillips and Teal Bunbury combined for 15 goals in the first third of the season.

A week after Real Salt Lake went into CenturyLink Field and earned a 1-0 victory, the Claret and Cobalt must defend home field against the Seattle Sounders.

Outside of the 4-1 drubbing it received in Philadelphia, RSL is in good form with three wins in four games, while the Sounders continue to struggle with one victory in their last five.

RSL enters with a 228-minute shutout streak against the Sounders, who last scored in the series by way of Harry Shipp in a 1-0 win on May 20, 2017.

The Week 14 MLS opener is mediocrity at its finest, and that might be too nice of a word to describe the matchup.

The Rapids are terrible. They haven’t picked up a point since April 14 and the Anthony Hudson hire doesn’t seem to be working out.

The Whitecaps is sticking on brand with its disappointingly dull four-game draw streak, but at least Whitecaps games have been excitingly recent as they’ve had three 2-2 draws and a 3-3 result against the Revs.

Sigi Schmid put himself near the top of the managerial hot seat power rankings, as the LA Galaxy lost five of their last seven games.

Even Zlatan Ibrahimovic’s late-game heroics weren’t enough to help the Galaxy recover from yet another pitiful defensive performance.

It won’t get any better for the Galaxy in Portland, as the Timbers search for their seventh straight win.

Samuel Armenteros should be champing at the bit to face the Galaxy defense after scoring three goals in the last two contests.

Philadelphia is pushing its way toward the must-watch category, but it still isn’t in the same class as Atlanta United.

The Union conceded twice during their four-game unbeaten run, and have an impressive road result at Red Bull Arena in their possession, but Mercedes-Benz Stadium is a different animal.

The Five Stripes stumbled of late, but they picked up a valuable road point in Foxborough on Wednesday.

If Atlanta’s pacy attackers test the Union’s back line early and often, Gerardo Martino’s team should cruise to a victory.

The Houston Dynamo and Montreal Impact have played 12 times dating back to Houston’s days in the Eastern Conference.

That trend could change on Saturday, as the Dynamo enter as the better side and the Impact haven’t won since May 5.

By now you know all the Orlando City-New York City FC storylines.

The latest one to develop involves the recent poor form of both fourth-year sides, as they have one win between them since May 13.

Each of Orlando’s last three defeats have come by a 2-1 result, while NYCFC has three goals in the last 360 minutes of action.

A win would do each side well, as the Revs, Union and Chicago Fire continue to work their way up the East standings.

We’re going to call this one the Alan Gordon derby even if the forward might not see the field after putting in a rare full shift for the Fire on Wednesday.

The injury-ravaged Fire showed a sign of life with a win in Orlando in Week 13, but threw that momentum out the window with a midweek loss to the Union.

San Jose had some promise entering the season, but that’s been ruined by two wins in the first three months of the Mikael Stahre era.

Sporting Kansas City gets another national showcase on Sunday, as it plays host to Minnesota United.

The first-place team in the West is cruising at the moment with a four-game unbeaten run in hand.

One of the results in that span was a 1-1 draw at TCF Bank Stadium on May 20, and Peter Vermes’ side has a good chance of earning points for the fourth straight game against the Loons.

The draw against Sporting KC was the start of a brief two-game unbeaten run for the Loons that was extended by a 2-0 win over Montreal in Week 13.