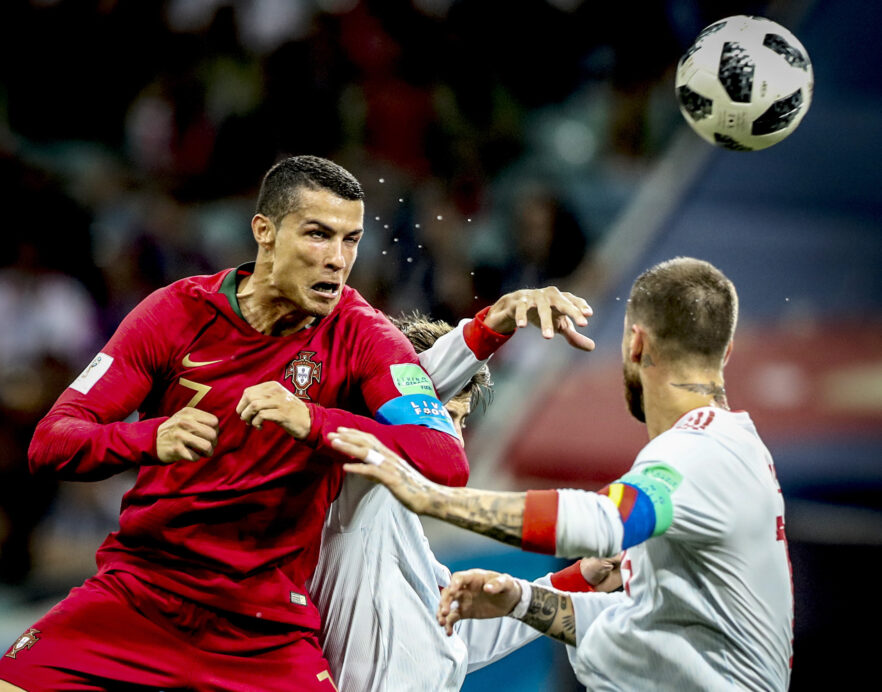 Friday’s clash of heavyweights certainly lived up to its billing with Spain and Portgual playing to a tie in a Game of the Tournament contender.

Cristiano Ronaldo provided a hat-trick to cancel out two goals from Diego Costa as Spain and Portugal tied, 3-3, in Sochi on Friday.

Ronaldo’s most impressive, and most important, goal came in the 88th minute with his side down by one. Given a chance at a free kick from the top of the box, Ronaldo curled a magnificent shot past David de Gea to seal a thrilling tie.

Just three minutes into the game, Portugal was in front on a penalty kick goal from Ronaldo. The star forward was brought down in the box by Real Madrid teammate Nacho Fernandez before stepping up to bury the spot kick for the early lead.

Spain slowly worked back from there, eventually scoring a goal of their own on a magnificent solo effort from Costa. It wasn’t without some controversy, though, as Costa muscled his was past Pepe and the rest of the Portugal defense in a sequence that was deemed clean by referees.

Moments before halftime, though, Portugal was back in lead on a David de Gea blunder. Following a spectacular touch from Goncalo Guedes, the Valencia forward found Ronaldo, who fired a low shot from the top of the box. That shot slipped through de Gea’s hands and into the back of the net, giving Portugal a 2-0 advantage heading into halftime.

Fireworks continued early in the second as Costa matched Ronaldo with his second goal of the game, finishing from close range on free kick sequence. Shortly after, Fernandez stepped up with a stunner, rifling a half-volleyed finish off the post and in with a Goal of the Tournament contender.

Spain dominated possession all through Friday’s match, enjoying roughly twice as much time on the ball as their Iberian rivals. Spain continued to rack up the passes once taking the lead until a late free kick from Ronaldo that served as a stunning equalizer.

There’s no doubt regarding Friday’s Man of the Match as Cristiano Ronaldo starred with a hat-trick.

Ronaldo’s late free kick was a stunner and it sealed a split of the points from what turned out to be an electric game.

David de Gea’s blunder allowed Portugal back in the game and the Spain goalkeeper was all but helpless on Ronaldo’s third and final goal.