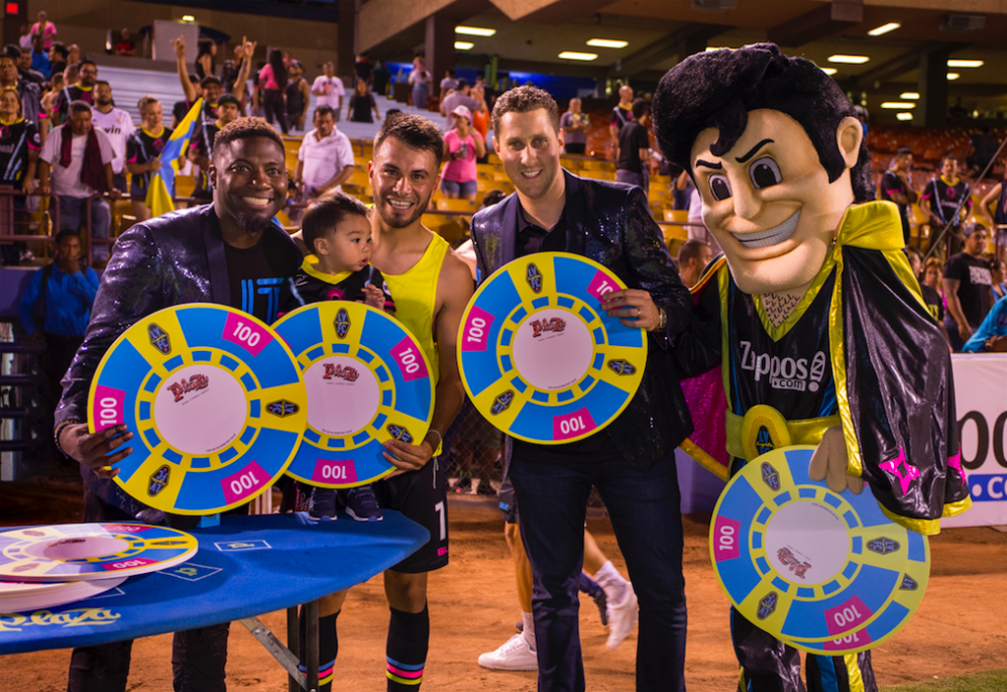 Adu was in the right place at the right time, latching onto the end of a long throw-in that the Switchbacks failed to clear. Adu pounced on the ball, finding the back of the net for just the third time since 2013.

The Lights also got goals from Carlos Alverez, Samuel Ochoa, and Matt Thomas to give the club their first win since March, defeating the Switchbacks, 4-1.

Let’s take a look at the rest of the action from Saturday in the USL:

NYRB II (4-3-5) lost their first home match, falling to first place FCC (7-3-2) after a poor second half doomed the young side. NYRB II jumped out to an early lead thanks to Amando Moreno’s seventh minute strike, but they failed to extend the lead in the second half when Brian White missed a 63rd minute penalty kick. FCC answered back immediately, scoring twice over the next fifteen minutes with goals from Emmanuel Ledesma and Danni Konig. This was the last match at Red Bull Arena for NYRB II before re-opening MSU Soccer Park next weekend.

Yann Ekra stole all three points for the Independence (6-3-2) with an 83rd minute goal that broke the hearts of the Fury (4-5-3) faithful. Andrew Dykstra kept the Independence in the match with a strong goalkeeping performance, and the match looked like it might end level as each side had a difficult time taking their chances. Ekra’s shot from the top of the penalty area took a nice deflection, evading Maxime Crepeau and finding the back of the net. The Independence travel to MSU Soccer Park next week to take on NYRB II.

The Riverhounds (5-1-6) avoided losing two straight by coming from behind on the road against the Kickers (3-6-1) Saturday night. The Kickers took the lead in the 53rd minute when Brian Shriver beat the Riverhounds backline and squared the ball to Luiz Fernando for an easy tap-in. Neco Brett’s goal in the 72nd minute and assist on the game winning goal in the 79th minute made the difference for the Riverhounds. Brett is proving to be the lynchpin in the Riverhounds offense, and their success will be closely tied to his.

The Steel (5-5-2) continued their climb up the table with their third win in four matches against NCFC (3-5-2). The home side jumped out to an early lead when Peabo Doue found the net in the seventh minute. NCFC looked like they would be taking home the victory, keeping the steel at bay for the next 75 minutes. The Steel would score twice in a two minute period to snatch the points, scoring first in the 83rd minute from Bejamin Ofeimu, and in the 85th minute from Michee Ngalina. The win vaults the Steel up to seventh place in the Eastern Conference.

The Rowdies (5-5-2) and ATL 2 (2-6-4) finished the match with 10 men a piece and no goals. Marcel Schäfer and Will Crain were dismissed in the first half, leaving the two struggling sides without a lot of answers. Despite the reduced personnel, the Rowdies and ATL 2 fought to find the net, but struggled to keep chances on frame.

Brandon Allen played a big part for NSC (5-2-4) in their 3-1 win over Penn FC (2-4-5). The striker scored a goal and added an assist to power the home side to a big victory. Allen scored first in the 36th minute on a cross from Ish Jome, then played provider in a give-and-go sequence with Lebo Moloto scoring in the 48th minute. Penn FC managed to pull a goal back 14 minutes before time, but Alan Winn pushed the match out of reach, extending NSC’s lead with a goal in the 81st minute.

1868 FC (5-3-5) extended their unbeaten run with a win over OKC Energy (2-9-1). The visitors got on the board early, with Zach Carroll putting away a corner kick in the 2nd minute. OKC Energy responded with a goal from Alex Dixon in the 34th minute. Lindo Mfeka put the winning goal after 1868 FC’s defensive pressure caused a turnover in OKC Enrgy’s half. Brent Richards square ball found Mfeka, and he powered the shot into the left corner. 1868 FC started the season with a stretch of poor form, but have rebounded to turn in the results many expected from them to start the season.

Corey Hertzog and Joey Calistri provided the goals for STL FC (4-4-5), but their defense kept the Rangers (5-3-4) out of the match. Hertzog opened the scoring from the penalty spot in the 26th minute, and Calistri added to the scoreline in the 77th minute. The Rangers’ poor road form continues as they have managed just two wins away from home this season.

The Foxes (3-4-6) got their biggest win of the season, completly torching the Sounders FC 2 (2-7-2) for their third win of the season. Goals from Juan Pablo Caffa, Christian Chaney, and a brace from Jemal Johnson proved too much for the struggling Sounders FC 2, who have now given the Foxes two of their three wins in their inaugural season.

The Roughnecks (0-5-7) fell once again, this time to Los Dos (3-6-4) on the back of an early goal. Miguel Aguilar followed up his shot cleared off the line and found the back of the net in the 6th minute. That goal proved to be all Los Dos would need to see out their third victory of the season. The Roughnecks remain winless in 2018.

Sac Republic (7-3-3) kept pace with the Western Conference leading Real Monarchs SLC with an important victory over OCSC (6-4-2). A back and forth match between the two sides looked like it was primed to head for a scoreless draw. Both teams found but failed to take their chances throughout the first 58 minutes of the match, but a foul on Vilyan Bijev in the penalty area, and calmly taken penalty kick from Jeremy Hall proved to be the difference for the home side. Both teams remain in the top of the table and looking like contenders for the Western Conference crown.