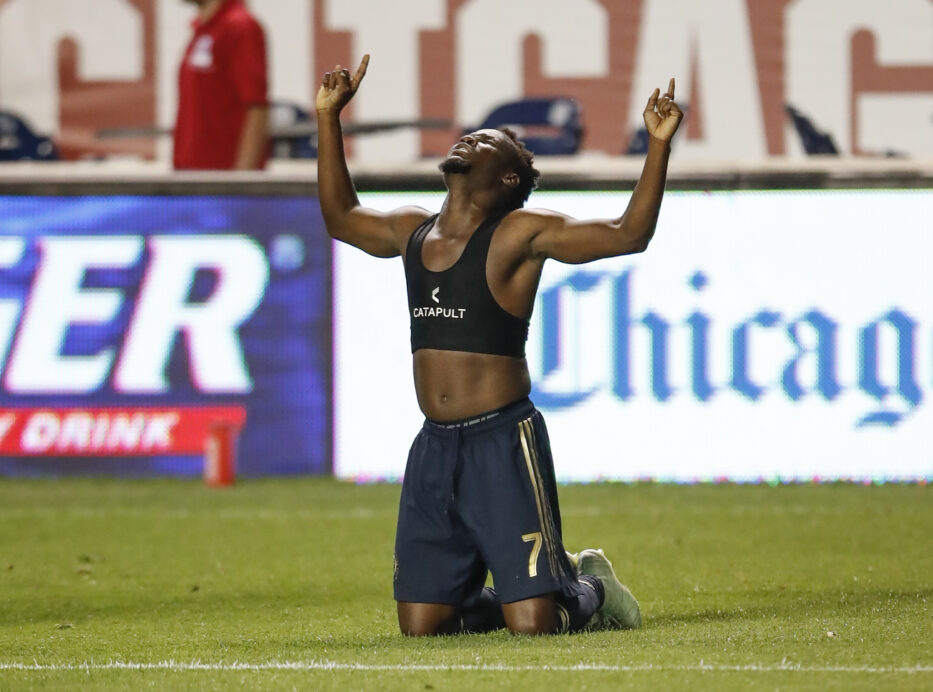 If there was a moment for David Accam to break out, it was Wednesday night.  Goalless in 16 appearances since joining the Philadelphia Union, Accam was mired in one of the worst streaks of his career as he looked like a shell of the player that became a star with the Chicago Fire.

It’s that very same Fire team that were on the unfortunate end of Accam’s reemergence, and it couldn’t have come at a better time for the Union.

Facing off with another team contending for the sixth spot in the East, the Union edged the Fire, 4-3, thanks to a stoppage time winner from Accam. Just moments after a Bastian Schweinsteiger equalizer, Accam stepped up to score in his former stadium with a stunning goal of his own.

Accam was clearly overcome by emotion, ripping his shirt off before remembering not to celebrate against his former club. However, the message was clear: Wednesday’s goal meant a lot.

“I needed this goal to get going for me,” Accam said. “I’m so happy, for this goal to go in. It’s even much, much better because it came here in Chicago so maybe I’m used to scoring goals here.

“I think every last minute winner is amazing for us,” he added. “For me, I’ve worked really hard and this goal will rank high in my career.”

During his time with the Fire, Accam had proven to be a double-digit goalscorer, a reliable presence in the attack that offers both speed and finishing. During his time with the Union, though, those goals dried up as Accam had looked nothing like the player that was a star in Chicago. Accam sputtered all the way through to May before losing his starting job, before a number of fruitless substitute appearances only furthered his slide.

That slide was difficult to bear for the Union, who paid a total of $1.2 million in allocation money to trade for Accam this winter. With CJ Sapong failing to find the back of the net, the Union have struggled for goals as the team has bounced in and out of the playoff picture.

The good news? Accam’s goal wasn’t the only breakout as Cory Burke scored twice on Wednesday, adding his third and fourth goals of the season. However, the Ghanaian star was the story for a team that can now hope for better going forward.

“David did a lot of good things even in the first ten games where he started.  He just wasn’t on the scoresheet,” said head coach Jim Curtin. “For him to get a goal tonight I think it’s huge. I hope it’s a big boost for his confidence.

“I know the whole group and coaching staff have had his back in this scoring drought as we call it but this was a big way to break out and I’m really happy for him. He’s stuck with things, he’s worked hard at training to get back on the field and now he puts on a performance where he gets the winner.”

For the Union to be successful, though, Wednesday’s performance can’t be a one-off. Accam needs to be a vital piece of this team. Burke and Sapong need to combine to offer something in the attack. Haris Medunjanin needs to continue to dictate the game while the young backline needs to hold up. A lot needs to go right for the Union to make a push, but at least they’re in position.

Following Wednesday’s win, the Union sit seventh in the East with a game in hand on the sixth-place Impact. The victory was a big one for the Union. Now, the idea to for Accam and co. to build on it.

“It’s huge for us. They are our direct rivals,” Accam said. “In training that’s what we’re thinking about coming here and getting three points. Now we did and we move on to the next game.

“It is huge for us. We worked so hard and I think we came here to win the game. We played to win and deserve those three points today.”