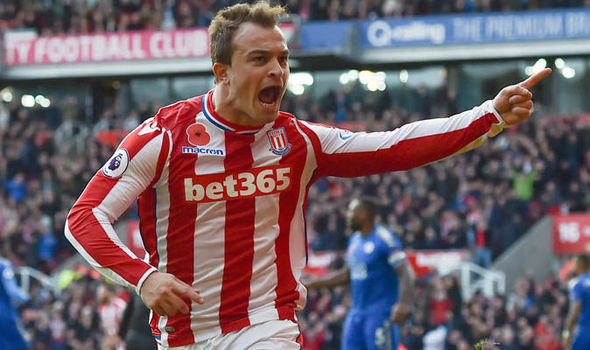 The Stoke City man has made the jump to the Merseyside giants on Friday, signing a multi-year deal, the club announced. Liverpool triggered the Swiss’ £13 million release clause after Stoke were relegated from the Premier League this pay May.

Shaqiri, 26, made 92 appearances across three seasons with the Potters and is coming off a strong World Cup campaign with Switzerland in Russia.

“I’m very happy to be here. It’s a huge club with big history, big players and a fantastic coach. So I’m really glad and happy to be here,” Shaqiri said in a club statement.

“As a player you always want to be on the biggest stage in football. A few years ago I wanted to come too but it didn’t happen. I’m really happy that now I’m finally here. I want to improve myself too, I want to be with the best and I want to win titles. That’s what I’m here for.”

Shaqiri has also played for Basel, Bayern Munich, and Inter Milan during his career winning six league titles in Switzerland and Germany combined. He will join a Liverpool attack that features Mohamed Salah, Roberto Firmino, and Sadio Mane.

Borussia Monchengladbach have won the race for French forward Alassane Plea, beating out several other European signs on Friday.

The 25-year-old Plea has inked a five-year contract with the club, beating out both Borussia Dortmund and Newcastle United, Goal reported. Plea is coming off a 20-goal season in all competitions with Ligue 1 side OGC Nice, where he played from 2014-18.

Plea has made the move to the Bundesliga, which is estimated to have cost Gladbach €25 million. Former Nice manager Lucien Favre had made the switch to Dortmund, but was unable to beat out his newest Bundesliga rivals to the signature of his former striker.

“We’re extremely glad that his transfer has gone through and we were able to sign Alassane despite a lot of competition from various other well-known clubs,” Gladbach Sporting Director Max Eberi said. “Thankfully for us, he wanted to come to Borussia at all costs. He’s a versatile, quick and clever forward who has put his talent on full display in Ligue 1 and the Europa League.”

In four seasons with Nice, Plea tallied 41 goals in all competitions even fighting off veteran Mario Balotelli for consistent playing time.

Southampton have been seeking a new leader in their defensive backline since the departures of both Virgil Van Djik and Jose Fonte. The Saints may have answered that question on Friday, with the signing of 25-year-old Jannik Vestergaard from Borussia Monchengladbach.

The Saints made Vestergaard their fourth summer signing under Mark Hughes, signing the centerback for £18 million, Mirror reported. Standing at 6’6, Vestergaard has been a regular for the Bundesliga club, and was also with the Danish National Team in Russia.

Vestergaard made 82 appearances for Gladbach over the last two seasons combined, scoring seven goals and registering one assist. The Kobenhaven native began his professional career with Brondby, but has also seen time with Hoffenheim and Werder Bremen before his switch to Gladbach in 2016.

He joins Stuart Armstong, Mohamed Elyounoussi, and Angus Gunn as the newest members to the squad. Vestergaard will face a quick reunion against his former side as Southampton face Gladbach in their final preseason friendly on Aug. 4.

Everton have joined the race for the services of Crystal Palace and Ivory Coast winger Wilfried Zaha, Daily Mail reports.

New manager Marco Silva has been reportedly been a long-time admirer of Zaha, who would be Silva’s first signing at his new club. Borussia Dortmund and Tottenham Hotspur are both understood to have interest in the speedy winger, who has been valued at £70 million by the North London club.

Zaha, 25, joined Palace officially in 2014 after a prior loan-stint with the club from Manchester United. He is coming off his best statistical season domestically, scoring nine goals and adding three assists in 29 appearances.

The evaluation of Zaha may be a bit out of Everton’s price range, but the club are willing to sell Yannick Bolasie in order to raise money for the move. Bolasie has been heavily linked with a move to Turkish side Fenerbahce, while Everton are also yet to clarify the future of loanee Ademola Lookman. Lookman spent was on-loan with RB Leipzig in 2017-18, impressing in his spell with the German side.

Former Liverpool midfielder Mohamed Sissoko has made the move to a reigning champion.

The 33-year-old Sissoko has joined reigning Hong Kong Premier League champions Kitchee on a one-year deal, Goal reported. After only 14 appearances with Mexican outfit Atletico San Luis, Sissoko will be hoping for more playing time with his new club.

“I’m very happy to join Hong Kong champions Kitchee SC,” Sissoko said from his twitter. “I want to thank my family, my loved ones, and all of my fans for your unconditional support.”