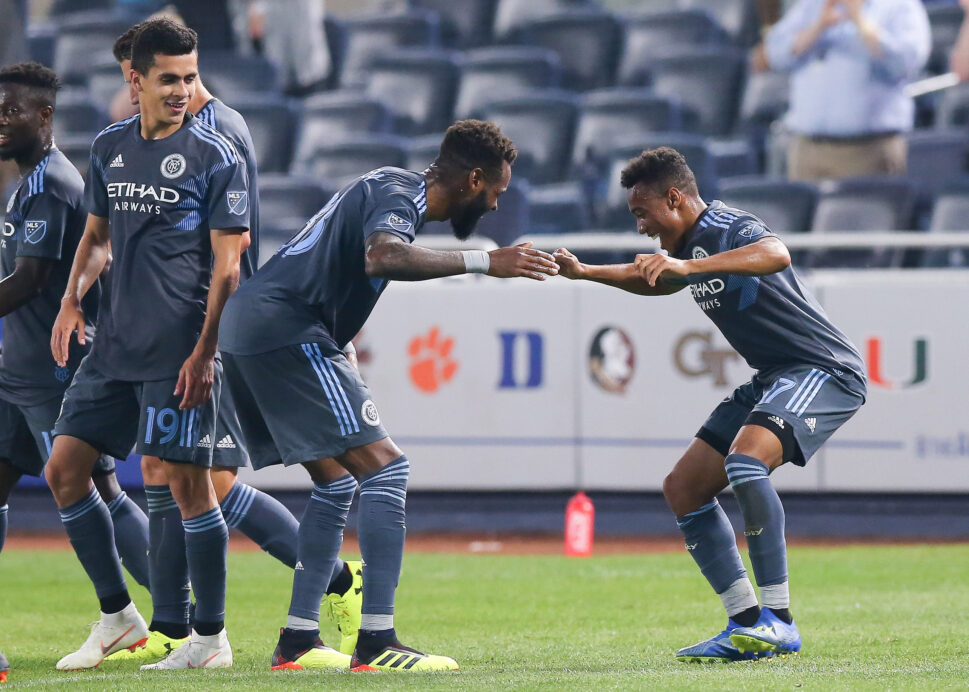 This week isn’t make or break for New York City FC, but the club is in the midst of a seven-day period that should reveal plenty about where the team is and where it’s going. The week is a big test, a major challenge, and, at least thus far, NYCFC has passed in a big way.

After handling rival New York Red Bulls over the weekend, NYCFC continued a streak of home dominance with a 3-0 win over the Montreal Impact on Wednesday night. With the win, NYCFC is now 9-0-1 at home.

It’s not just the record that impresses, though, but how they’ve done it over the last two matches. Facing a playoff contender and a playoff hopeful, NYCFC has overcome the absence of David Villa and a short turnaround to pick up two impressive wins.

“It wasn’t easy for us because we played two games in three days, but I was impressed by the performance of our players,” said NYCFC head coach Domenec Torrent. “Our players seemed physically better than the Montreal players. I congratulate my players because what they did was amazing, but the most important thing when that happens is to pass the ball and keep the ball.

“That was the idea that the team had to win these big games,” added defender Ronald Matarrita. “So far, out of these three games, we have six [points] out of the nine. That’s what we’re all here for to continue playing together and continue getting those victories.”

The two matches presented entirely different challenges. Against the Red Bulls, NYCFC’s tactics dictated an ugly, back-and-forth match. There were long balls galore and few chances but, ultimately, it worked as NYCFC pounced on the only mistake of the match.

Against the Impact, possession was the plan. NYCFC completed 726 passes to the Impact’s 324 as the hosts dominated possession and, ultimately, the socreline.

With the compact schedule, Torrent has utilized a number of different players to help shoulder the load. Rodney Wallace, back from World Cup duty, has started both matches. The Red Bulls win saw a standout performance from Maxime Chanot. Tommy McNamara started just his second match of the season on Wednesday, playing 67 minutes in the midfield. Oft-used Kwame Awuah came in down the stretch on Wednesday, allowing midfield star Alexander Ring a bit of rest.

But no player has impressed as much as Jonathan Lewis. After helping to create the game-winner against the Red Bulls, Lewis scored NYCFC’s third and final goal to only add to a streak that has to have left his new manager, Torrent, impressed.

“He’s a fighter,” Torrent said of Lewis. “When the opponents defended deep, he has more issues. I prefer [taking it] step-by-step because he’s a young player, and I am here, my staff is here, to improve the young players. When the game is open, it is the right moment for Jonathan because the quality for Jonathan is to run behind them. But step by step he has to improve.

Now, the idea is to turn around quickly yet again for another difficult home match. A clash with another playoff contender, the Columbus Crew, awaits as NYCFC faces its third tough Eastern Conference test in a span of less than a week.

Expect rotation again, especially as Villa recovers, but NYCFC’s depth pieces have stepped up to the task so far as the team continues to roll.

“It’s important the work that the group is doing,” Matarrita said. “Honestly, we feel like one of the strongest teams in the league. We’ve been working really hard towards that and little by little as the games go on you’re starting to see the ideas coach has with us and we as a group have to go out and do it right on the field.”

“Well we knew as a group coming in it was going to be a tough week with three games to be played,” added goalscorer Jesus Medina. “However, we just finished the second game and tomorrow we shift our focus to next game on Saturday. We have to rest as much as we can so we can arrive well on Saturday.”